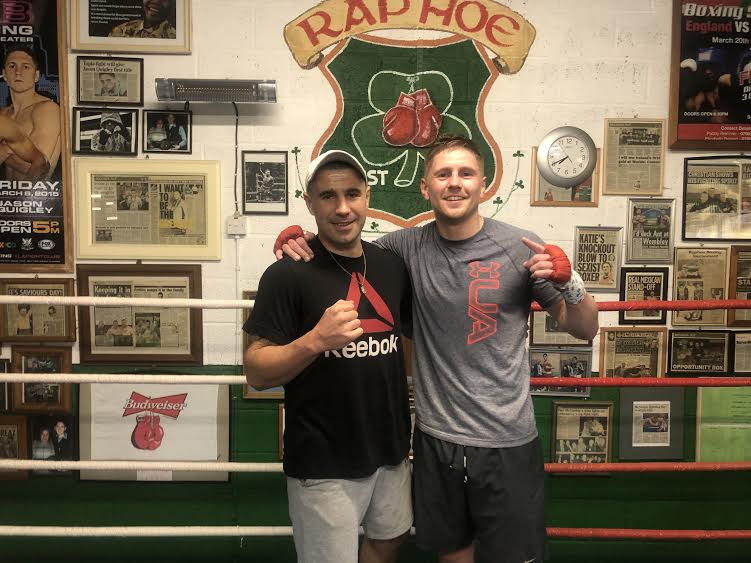 JOHN Hutchinson has backed Jason Quigley for a shot at Canelo Álvarez.

Quigley (18-1, 14KOs) remains firmly in the frame among the contenders to face the Mexican.

Quigley’s team have told Golden Boy Promotions that the Ballybofey man would take a fight against Canelo (53-1-2, 36KOs).

Former professional boxer Hutchinson (12-2-3, 4KOs) is back in Buncrana for a month after belong Petr Yan to victory over José Aldo at UFC 251 on ‘Fight Island’ in Abu Dhabi. Hutchinson has been working as a boxing and striking coach with Yan’s Thailand-based team for the last two years.

This week, he took the chance to give Quigley a few rounds on the pads.

“He’s got good power there and he can add more power. He’s developing as a good solid pro now. There are big fights out there for him.

“Jason is a hard hitter. I can see there in one session that he can add more. Add that bit of power and snap to his boxing style, he will improve.”

Quigley – now under the direction of former world champion Andy Lee – has beaten Abraham Cordero and Fernando Marin by way of third-round stoppages in his last two fights.

After bearing Marin in Costa Mesa in January, Quigley said: “At the end of my career, I want to have been in with the best and tested myself. I want to come away saying that I ruled the middleweight division and come away with fulfilment.”

‘Buncrana Banger’ Hutchinson believes Quigley could step up to the mark against Canelo.

He said: “It would be a win-win fight for Jason. He’d test himself against the best.

“That man has the boxing background. Any man who fought Canelo, the likes of Khan, who could box and move, give him trouble. Do that and you always have a chance. We did a bit there on his movement, his power. Who knows?

“There could be an upset. It would be a great fight for Jason.”

At Raphoe ABC, before Quigley headed back to link up with Lee, Hutchinson did some rounds with the former world amateur silver medallist, showing him the sort of refined work he puts his men through in Thailand.

Moving to work in the UFC has been a sea-change for Hutchinson, but with Yan having stopped Aldo earlier this month to clinch the bantamweight belt, it has certainly been a success.

He said: “I’m loving it. I knew Petr could be a world champion. We’ve been developing fight-after-fight. It’s been a great journey so far. He’s fighting again in October, that’s the plan anyway.”