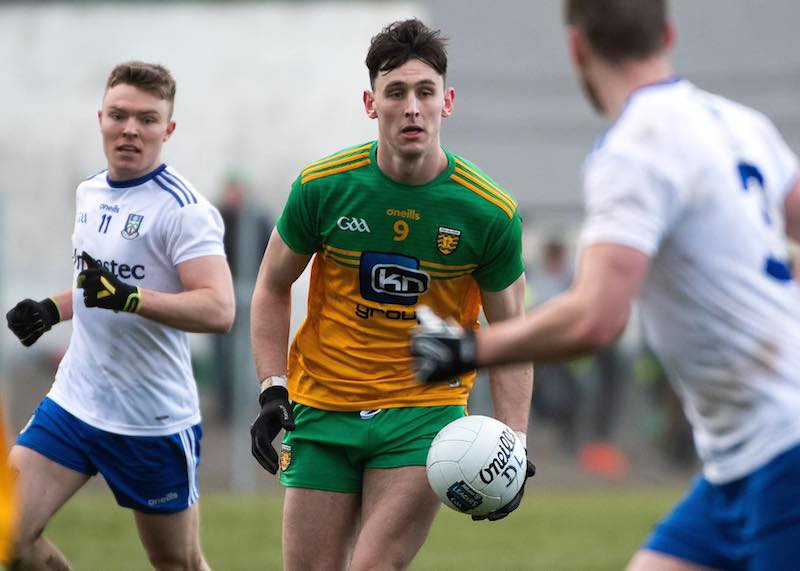 MICHAEL LANGAN provided the dream start with a goal on ten seconds, Oisin Cannon saved a Michael Murphy penalty and Colin McFadden grabbed two goals as an impressive St Michael’s got the better of Glenswilly in the Donegal SFC opener.

In the opening fixture of the Michael Murphy Sports and & Leisure Donegal SFC, it was a well-deserved win for the team from Dunfanaghy, who saw Colm McFadden fire over four points in all as Colin McFadden scored the vital second and third goals to seal it late on.

Glenswilly clung on for dear life and managed to keep in the contest, as St Michael’s clumped up 14 wides, but can have little complaint about the result. The three-time county champions welcome Four Masters next weekend as St Michael’s will be looking to double their money at Milford.

Donegal midfielder Langan claimed the ball from referee Seamus McGonigle’s throw-in and ran straight at the heart of the Glenswilly defence. When he got within range of a pop-over, Langan kept going having opted against knocking over a point, instead smashed the ball past Frank Carberry in the visitors’ goal. Dream start.

St Michael’s had chances to add to their lead against the wind. Five balls went wide as Kyle McGarvey saw an effort at goal blocked by Mark McAteer. At the other end, Glenswilly weren’t firing but they were accurate from the occasional chance they made and despite their poor start, points from Kealan Dunleavy and a Michael Murphy free meant they only trailed 1-0 to 0-2 on 15 minutes.

A Gary McFadden free that dropped short did cause a bit of bother to the home defence before being cleared. Dominating they were, but it took St Michael’s 19 minutes to post a point, which they did through Colm McFadden. Murphy pulled on back at the other end.

With the sunshine subsiding and the evening turning dark and murky, Glenswilly did well to quell St Michael’s rapid forays forward. Colm McFadden added a second point, from a free, to make it 1-2 to 0-3. Caiomhinn Marley put over a fine long-ranger approaching the break – a score which surmised the first half with Glenswilly refusing to buckle. Another soundbite  saw McGarvey fluffing a goal chance into Carberry’s hands as St Michael’s saw another chance come and go.

Leon Kelly then hit the upright with a bouncing shot as Glenswilly belatedly made use of their tailwind. With the intensity level rising, Langan, the half’s best player, hobbled off at half-time.

Both sides had opened their Regional League campaigns with a pair of wins apiece, with Gary O’Neill’s St Michael’s overcoming Termon and then neighbours Cloughaneely. On the other hand, Glenswilly were content with their season opening wins over Milford and Downings.

Langan returned for part two, looking uncomfortable now at full-forward and barely lasted six minutes. Just before that withdrawal, Shaun Wogan, in Glenswilly’s best move of the match with Murphy and Caolan Kelly involved, had been hauled down by St Michael’s goalkeeper Cannon and referee McGonigle signalled penalty. Glenswilly had an opportunity to lead for the first time.

Murphy’s spot kick was struck hard and true but Cannon went the right way and made a fine save to keep the scores level – 1-2 to 0-5. Carlos O’Reilly, on 38 minutes, eked St Michael’s in front and McFadden’s free two minutes later pushed it out to 1-4 to 0-5.

Ten minutes from time came a huge moment when Colin McFadden added a second St Michael’s goal, slotting under the advancing Carberry following an excellent defence-picking pass from Carlos O’Reilly. It put the locals 2-4 to 0-6 in front.

Murphy and McFadden, two-thirds of Donegal’s All-Ireland winning inside line from 2012, swapped scores and Dunleavy’s point meant Glenswilly were still only three down. A minute from time, though, Colin McFadden scored his second of the evening with another crisp shot, having been found in space by Martin McElhinney. St Michael’s made sure they didn’t let it slip.