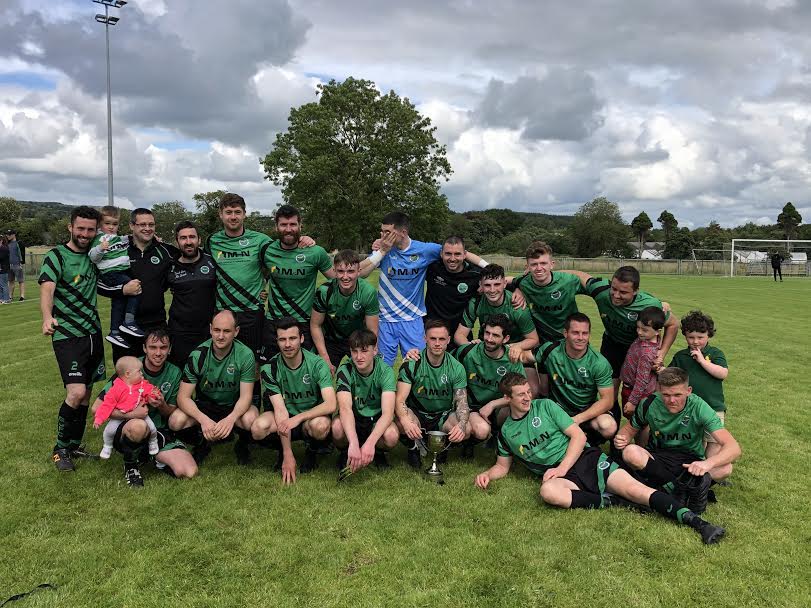 By Chris McNulty at Orchard Park

It was a winner-takes-all clash of the Division’s top two at Orchard Park and McFadden proved the match winner as The Glaserchoo outfit left with the prize.

It was a game packed with incident and yet strangely still devoid of really cutting-edge chances.

Glenea arrived in Convoy knowing that a draw would suffice while the hosts had to win, but Kevin McFadden’s squad certainly didn’t arrive with a share of the spoils in the minds.

Convoy had to play with ten men following the 41st minute sending off of Noah Mailey, just five minutes after veteran striker Darren McElwaine had to go off injured. It was a double blow for Mickey Rodgers’ side.

Glenea sealed the deal eight minutes from the end. Ciaran McGeady, who had been to the fore for the visitors for much of the afternoon, stepped inside Gary Wilson and drew a foul.

Referee Liam McLaughlin pointed to the spot and McFadden – who had come on as a first-half substitute – tucked past goalkeeper Lee Boyd.

It left Convoy needing two goals to turn the tide – and it was too stiff a challenge.

Convoy began with a real purpose and JP Malley shot over the top inside the first minute, although the offside flag would have halted his march in any case.

At the other end, McGeady beat the offside trap to latch onto Kevin Mulhern’s through ball. McGeady went to ground but Liam McLaughlin turned down the appeals.

Glenea full-back Kyle McMullan had a header blocked at close range and an inviting cross from Mailey, whipped dangerously across the Glenea goal face, yearned for a touch that wasn’t forthcoming.

McGeady shot against the post with Boyd getting a vital hand to the effort as Glenea began to press, but Johnny Doherty drilled wide with a reminder for the hosts.

Coll was out well to save at McGill’s feet. McGill was presented with another opening soon after, but as he elected to turn onto his favoured right foot, the chance was gone.

Glenea had big claims for a penalty when Darren McGeever’s shot from ten yards was blocked by Doherty on the goal-line. McLaughlin deemed that the ball had struck the Convoy man on the face, as opposed to a hand, and his call appeared to be the correct one.

Last weekend, former Letterkenny Rovers striker McElwaine scored a hat-trick in a 5-2 win over St Catherine’s. His contribution has been vital to Convoy this season and his enforced withdrawal, owing to a hamstring injury, put a chink in their armour.

A further blow arrived when Mailey was given a straight red card for an over-zealous challenge on John McFadden.

Deep in the first half, Boyd saved from John McFadden after McGeever’s free kick was blocked by the Convoy wall.

In the opening minute of part two, a long kick-out from Coll almost caught Boyd out. A wicked bounce might have deceived the Convoy net minder, but his fingertips averted the danger.

Boyd did well to hold a McGeever free after McGeady had surged from midfield on the hour.

Dean Bonner riffled wide for Convoy as the game opened up, but the wind was taken from their sails when McFadden stepped up to convert from the spot.