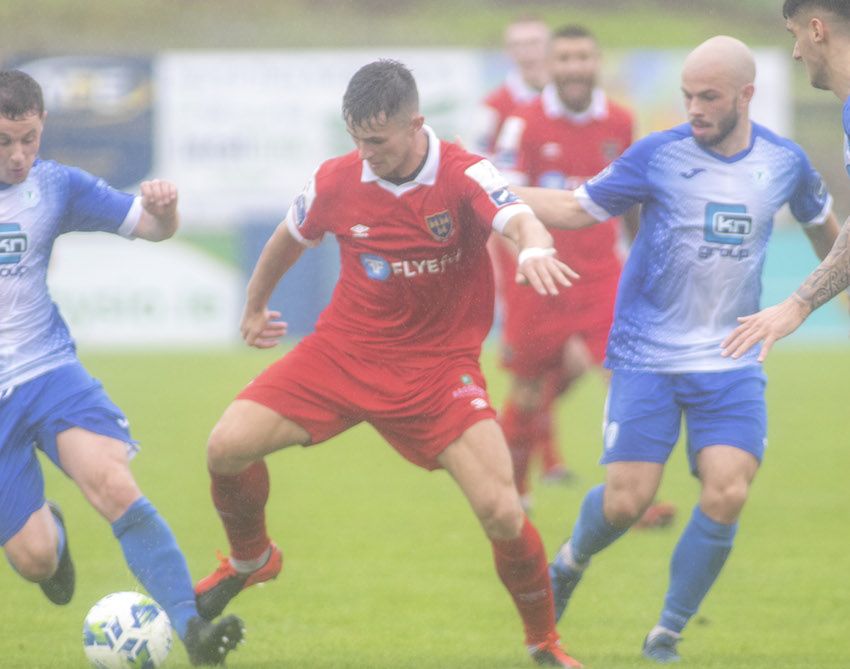 PREMIER Division football returned to Finn Park for the first time in 152 days – but it was an evening to forget as Harps were beaten by ten-man Shelbourne.

A 29th minute header by Ryan Brennan proved the only separator as Shels – who had Karl Sheppard sent off in in the 11th minute -left Ballybofey with the win.

For long spells, Harps’ performance was as lifeless as their surroundings as Ollie Horgan’s men failed to take advantage of their greater numbers.

Owing to the government’s Covid-19 restrictions, only 200 people are permitted at outside gatherings, meaning only 50 of Harps’ season ticket holders were allowed in for this one.

Shels were reduced to ten men when Karl Sheppard was shown a straight red card following a wild tackle on Leo Donnellan. Referee Damien McGraith was well positioned and reached straight for his pocket.

Five minutes later, Aaron Dobbs was cautioned after leaving the boot in on Sam Todd inside the Harps area.

Harps couldn’t make their numerical advantage count, though, and it was Shels who took the lead in the 29th minute. Ryan Brennan rose highest and flicked a header beyond the reach of Mark Anthony McGinley from Alex O’Hanlon’s cross.

Aaron Dobbs blasted into the Town End terrace, the usually popular vantage perch for many Harps followers, with only 12 of the 50 permitted fans opting to watch from behind the goal.

Chances were limited for the hosts, with an off-target attempt by Leo Donnellan as good as they could muster in the opening 40 minutes.

Alex Kogler fashioned a good chance, but the Austrian striker was denied by Shels ‘keeper Colin McCabe after he stepped neatly onto his left foot inside the area.

Just before the break, it took a timely and brave intervention by Sam Todd to prevent Dan Byrne from doubling the lead and, from the resulting corner, whipped in by Dayle Rooney, Luke Byrne headed wide.

Harps returned to action after a near-five-month hiatus on Saturday when they slipped to a 3-1 defeat to pace-setters Shamrock Rovers in Tallaght.

Ruairi Harkin came in for Dave Webster in the sole change made by Horgan for the visit of Shels, the 2019 First Division winners, who included ex-Harps right-back Aidan Friel in their line-up while Daniel O’Reilly – who excelled for Harps last season – came on as a late replacement for the Tolka Park residents.

In a bid to shake his men into action, Horgan sent on Adrian Delap at the interval, while Tony McNamee had replaced the injured Leo Donnellan in the dying embers of the first half.

McNamee shot over 20 minutes from the end, just after Karl O’Sullivan – who scored the Harps goal in Tallaght – drew a strong save from McCabe.

Ten minutes from the end, Kosovar Sadiki fired wide of the target.

In added time, O’Reilly diverted over his own crossbar as Harps slipped to a disappointing defeat, the Donegal outfit falling five points adrift of this evening’s opponents.