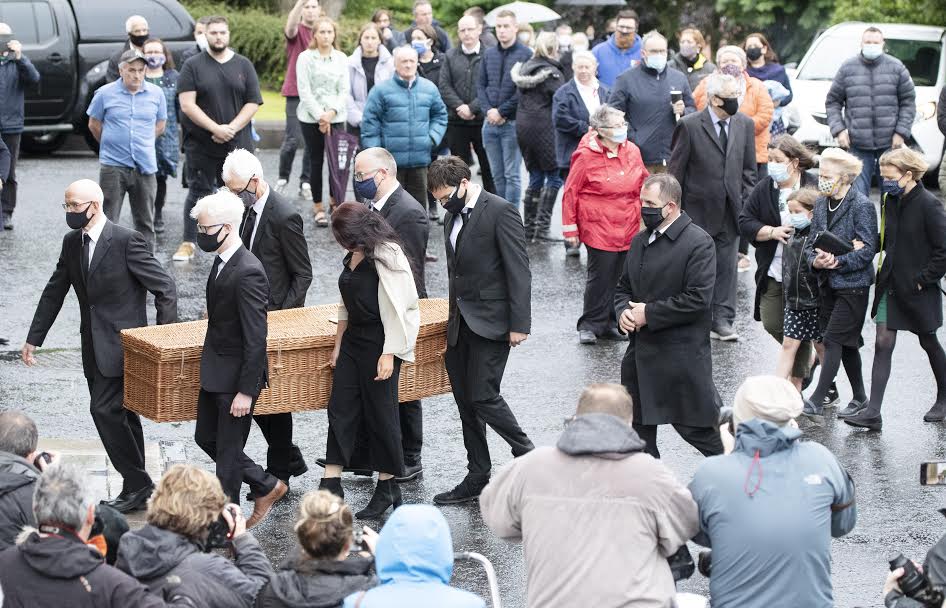 SYMBOLS of hope and flickers for peace – which defined his life and times – pockmarked John Hume’s final journey into his native Derry city tonight.

It was just after 8.30pm in fast-fading light when the wicker coffin carrying the remains of the Nobel laureate were received by the Bishop of Derry, Dr Donal McKeown at St Eugene’s Cathedral.

The former SDLP leader died in the early hours of Monday at the Owen Mor nursing home in Derry.

This evening, he was taken on a journey from the Hume home, outside the Foyle-straddling village of Moville, back into the Town He Loved So Well.

At various points on the route, people lined the roadside to applaud as the hearse passed, many of them holding candles. Among them were the Mayor of Donegal, Cllr Rena Donaghey, and TD Charlie McConalogue.

Candle flames flickered on the sills of windows along the route.

The image of the candlelight on a darkening night felt apt, for John Hume had enabled a generation to see light amid endless darkness.

A small crowd applauds as the remains of Nobel laureate John Hume pass through Moville in Co.Donegal. The coffin will be taken to St.Eugene’s Cathedral in Derry ahead of his funeral mass tomorrow. @bbcradiofoyle pic.twitter.com/nr4D7mmKA8

At the entrance to St Eugene’s Cathedral, a physically-distance guard of honour formed, with those present holding candles.

In 1998, Mr Hume and the then UUP leader David Trimble were awarded the Nobel Peace Prize.

It was his work in bringing about the peace process in Northern Ireland, and his central role in the Good Friday Agreement, for which he is best remembered.

“He was the greatest Irishman ever. He achieved something that no-one could ever achieve before him.

“He ended the Anglo-Irish conflict, the conflict that had gone on for 800 years. And he gave my generation the opportunity to achieve our political goals peacefully and democratically, and that is an enormous legacy.”

“With his enduring sense of honour, he kept marching on against all odds towards a brighter future for all the children of Northern Ireland.

“Through his faith in principled compromise, and his ability to see his adversaries as human beings, John helped forge the peace that has held to this day.

“I’ll never forget our night in Derry in 1995, with the town square and blocks around full of hopeful faces, walking with him across the Peace Bridge nearly 20 years later, and all of the moments we shared in between.

“His legacy will live on in every generation of Northern Ireland’s young people who make John’s choice, to live free of the hatred and horror of sectarian violence.”

John Hume’s Funeral Mass tomorrow from St Eugene’s Cathedral in Derry will be shown live on RTÉ One, RTÉ News Now and on the RTÉ website