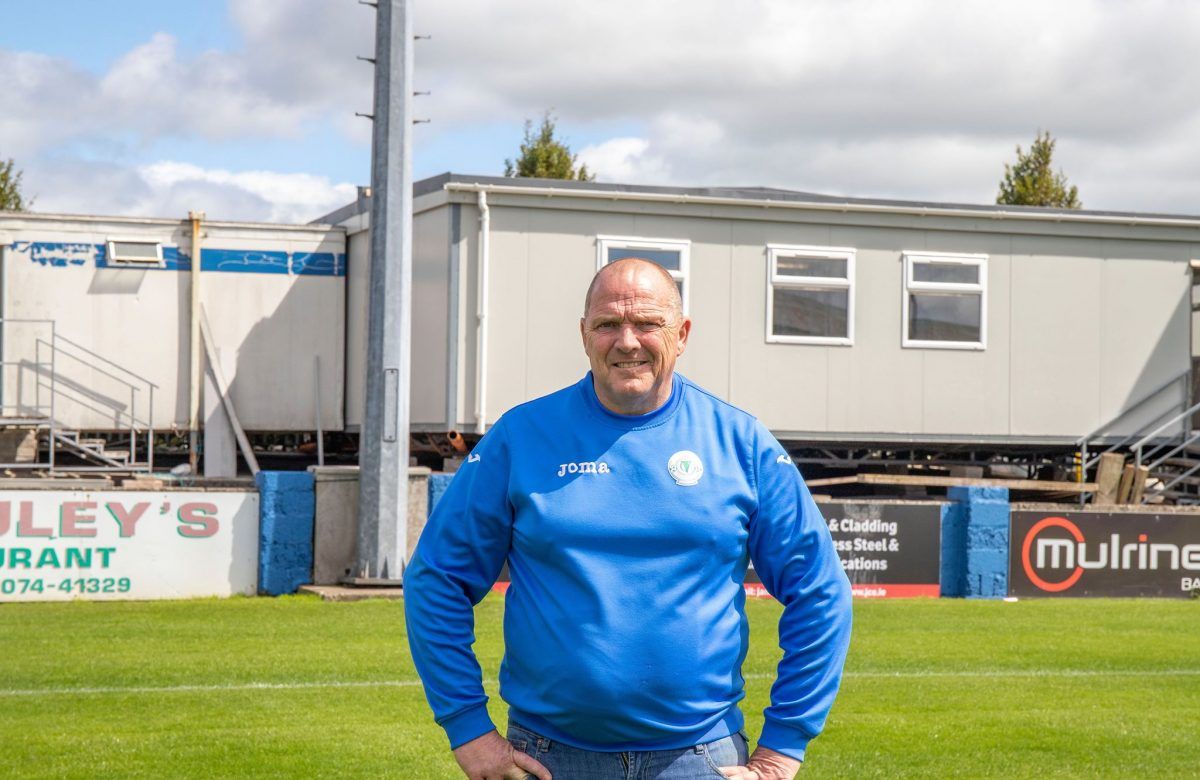 Yearning for The Old Normal as football returns to Finn Park

AS A regular attendee at Finn Park since the mid-1990s, the old place has made the blood pressure soar more often than not.

Football returned to the Navenny Street ground on Monday evening. And Finn Park’s first taste of post-lockdown football, as Finn Harps took on Shelbourne in the Premier Division, was a strange experience.

Picture: Finn Harps director Ivan Harvey with the new dressing room, kitchen and toilet and storage units that have been installed at Finn Park

It’s nothing new for the steps to quicken on the approach – many a night, the floodlights have flickered and a certain sort of ‘magic’ has hung over the Finn when you just know that it’s going to be ‘one of those nights’.

On storied nights of the past – you know the ones: beating Shels in the Cup; Donal O’Brien against Derry; McHugh’s thrilling hat-trick against Longford amid a crushing defeat; bearing Dundalk to win the First Division; BJ Banda and the moment time stood still – Finn Park has heaved to its rustic seams.

Monday, and what ought to have been a titanic tussle between two sides battling for survival, was different.

The mind spun wandering down Navenny Street on Monday. ‘The new normal’ involves a temperature check prior to entry, in line with Covid-19 protocols and guidelines. Couldn’t someone have checked the pressure that Sunday in 2001 when we were (erroneously, of course) informed that UCD had scored against Galway United and weren’t relegated …

Ethan Lee, the club’s media officer, points a gun (well, an infared thermometer) to my forehead. ‘You’re good to go’. 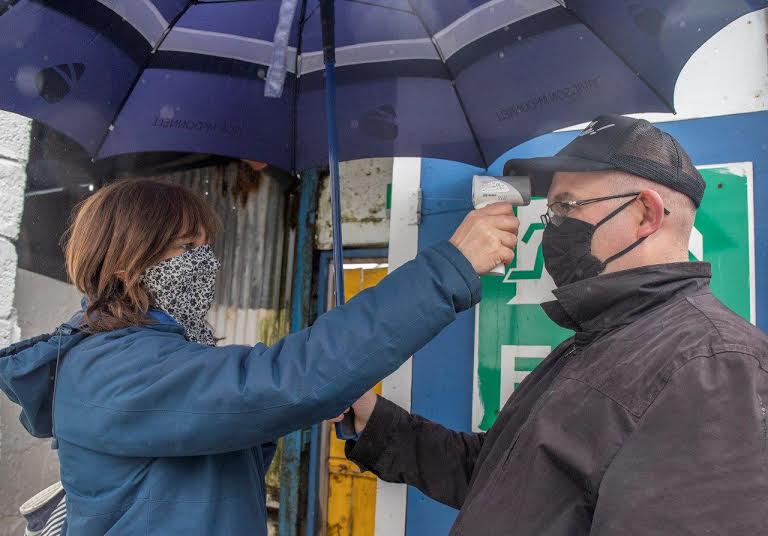 The media enter via the Navenny Street entrance. Face coverings are mandatory and off we go to the press area at the back of the stand. Even the view has changed. The press gantry is being used by RTÉ, who are providing a streaming service for League of Ireland fans not fortunate enough to be permitted into grounds. Once this writer’s regular perch, it now feels curious being back in the stand watching Harps.

With crowd restrictions remaining in place, Harps have been able to allocate only 50 tickets to season ticket holders.

Margaret Gordon is carrying out temperature checks at Chestnut Road as supporters slowly file in through their only entry point.

“We thought that we had seen it all here. This is completely new. The main thing is safety, which is paramount. Everyone is playing a part. There are a lot of protocols to adhere to.” 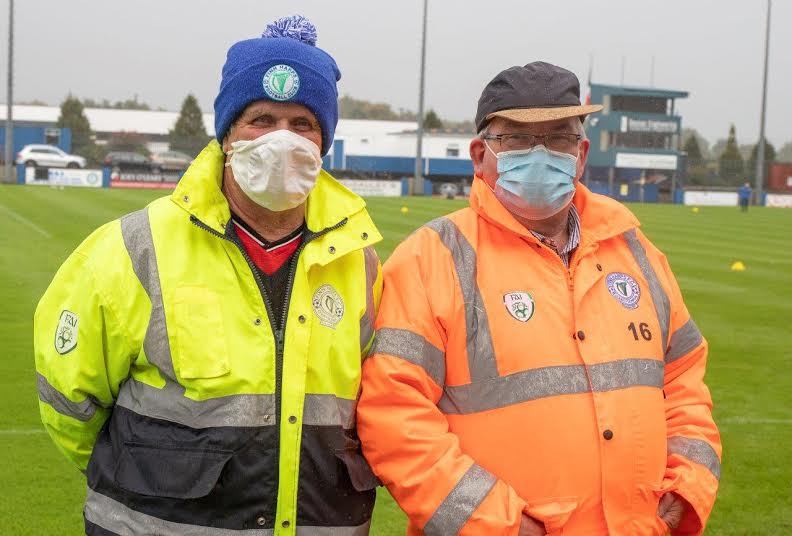 There is no chip van inside the ground today. Pat Floyd and Margaret Patton are still at the tuck shop inside the Navenny Street entrance but, with a paltry attendance, sales of their famous soup are limited.

Harps are highly dependant on match night revenues but everything from soup to programme sales to jersey purchases have taken a pummelling.  The programme in itself is an outline of just how vast life has changed. The front cover depicts Seamus McKelvey, Aidan Gallagher and Frank Larkin – three great Finn Harps supporters who died during the lockdown. ‘Never forgotten’ reads the inscription beneath the wonderfully crafted page, designed by Watercolours By Chris.

There is no half-time draw and, as the mind wanders waiting on the delivery of Pat’s soup, I think of those days when Paddy Breen’s ‘a hundred pound for a pound’ mantra echoed every second Saturday.

The chip van operators have decided that they, too, would be wasting their cooking oils, but half-a-doze or so hardy souls have braved a soaking night to watch from behind the fence at the River End.

League of Ireland fans are a loyal breed for whom the weather matters not. Adrian Ferry and Conor McGlynn are quite content to take in the elements from their perch on the Town End Terrace. 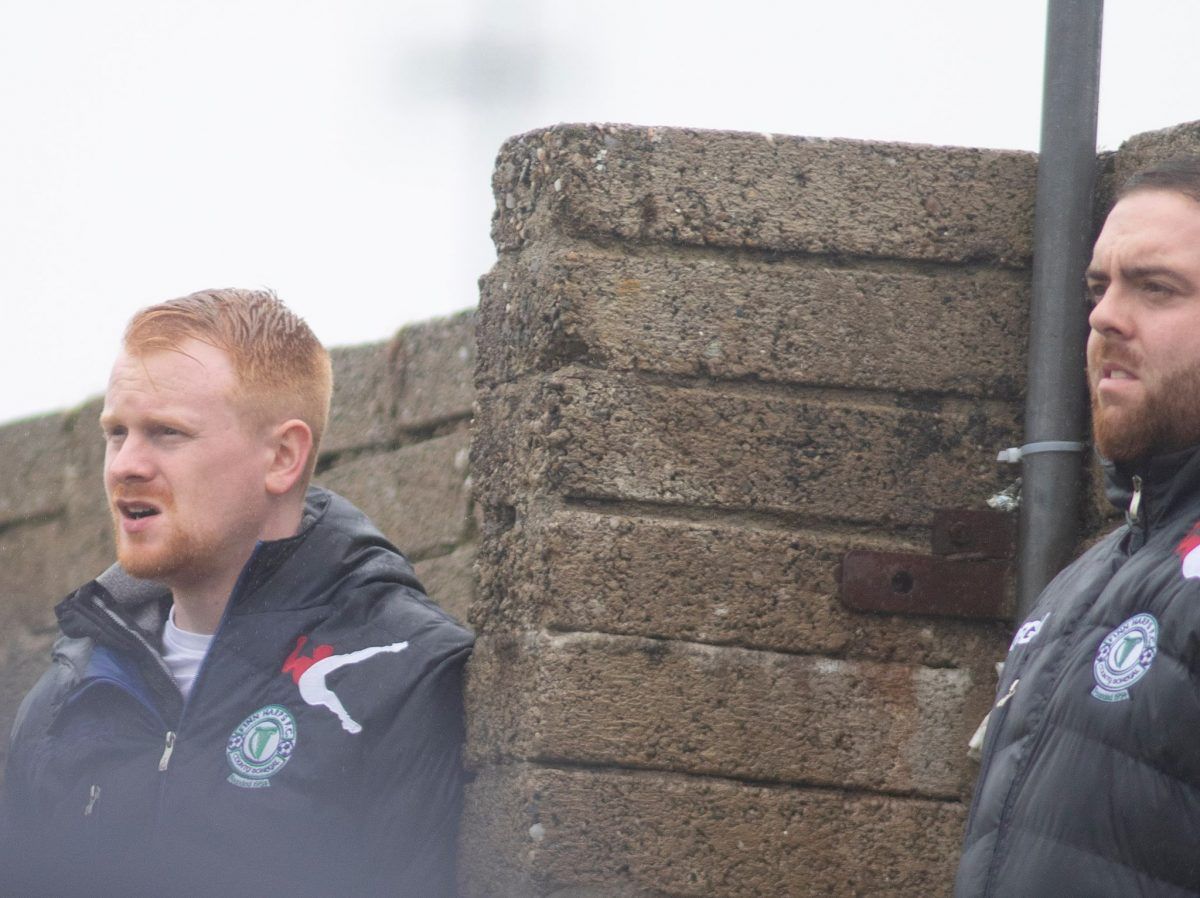 The absence of atmosphere means that every shout of Ollie Horgan and Paul Hegarty are clearly audible.

“Shocking Damian… Aaron Dobbs had a hand on his arm,” Horgan informs Damien McGraith, the referee, after 17 minutes.

By that point, Harps are a man after Karl Sheppard’s 11th minute dismissal, but a Ryan Brennan goal gives Shelbourne the lead on 29 minutes.

Until Monday, Harps had been hopeful of an increase in the permitted crowd numbers. The announcement, confirmed during the first half of the game, that the current restrictions will remain for at least another three weeks comes as a major blow for Harps.

“We need supporters in the gate,” Campbell says.

“With match night staff, the opposing team, the media, you’re up to 150 right away. We have 230 season ticket holders. We just have to work with what we’re given. 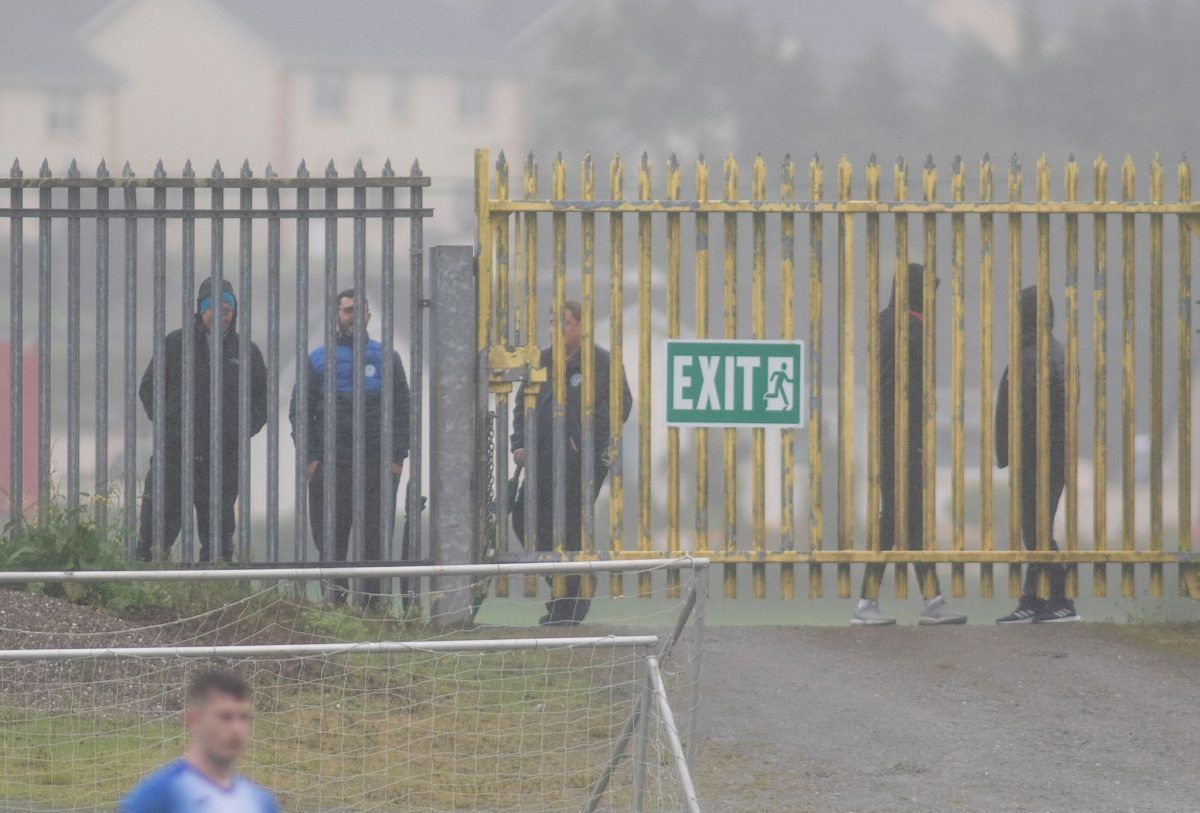 Finn Harps supporters watch from outside the ground

“We were talking to a lot of sponsors and their uncertain futures were about livelihoods. We are a business, too. We were watching the Covid figures, going up, down, up, down.

“At times, we wondered if we could have people in and a couple of weeks back we hoped to be able to have 500 people to this game. That was postponed but we’re hopeful again that we’ll be allowed 500 people in again. That would be huge for us.”

With Harps trailing and attacking the Town End, the scene would ordinarily be much different with swathes of supporters on the terraces urging their team forward. Harps’ performance was flat on Monday, perhaps aided by the eerie surroundings. 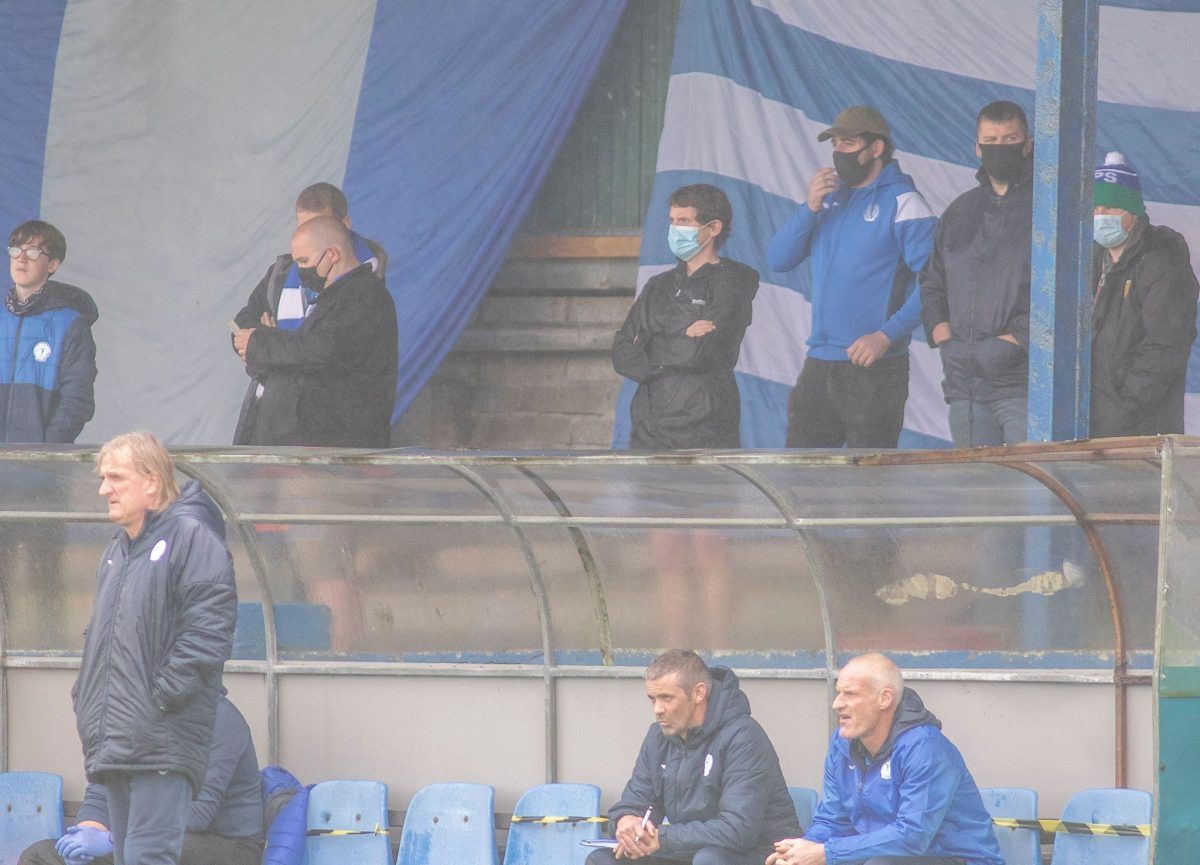 “Especially in the last 15 or 20 minutes, you’d usually have the fans shouting us on if we were a goal down. They’re a big help.

“Every team is experiencing the same, but we’ll just have to get used to it – and quick. There aren’t already many games left.”

When the balls goes out, they are sanitised before being returned atop several training cones dotted around the pitch.

Harps frustrate those watching, in the ground and on the WATCHLOI platform, with a lack of creativity and we leave somewhat unfamiliar surrounds with very familiar feelings!

Finn Park itself has had something of a facelift during lockdown, in order to make the ground Covid compliant. 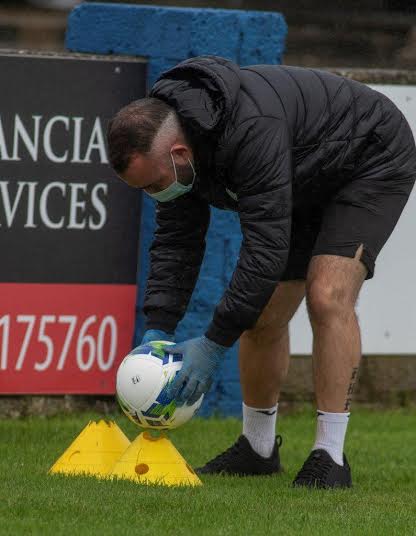 After a successful GoFundMe campaign helped to raise in excess of €30,000, four new portacabins were purchased by the club. A large portacabin, which had been used as a classroom at a school in Ardara, is now the home dressing room. The visiting teams have the use of the two dressing rooms in the Finn Park clubhouse.

Other units, purchased from the Donegal GAA Centre in Convoy, are being used as a kitchen, a medical room, toilets and a storage facility.

Harps Director Ivan Harvey was the engine behind this development. Tuesday was his first Finn Park free day in weeks. 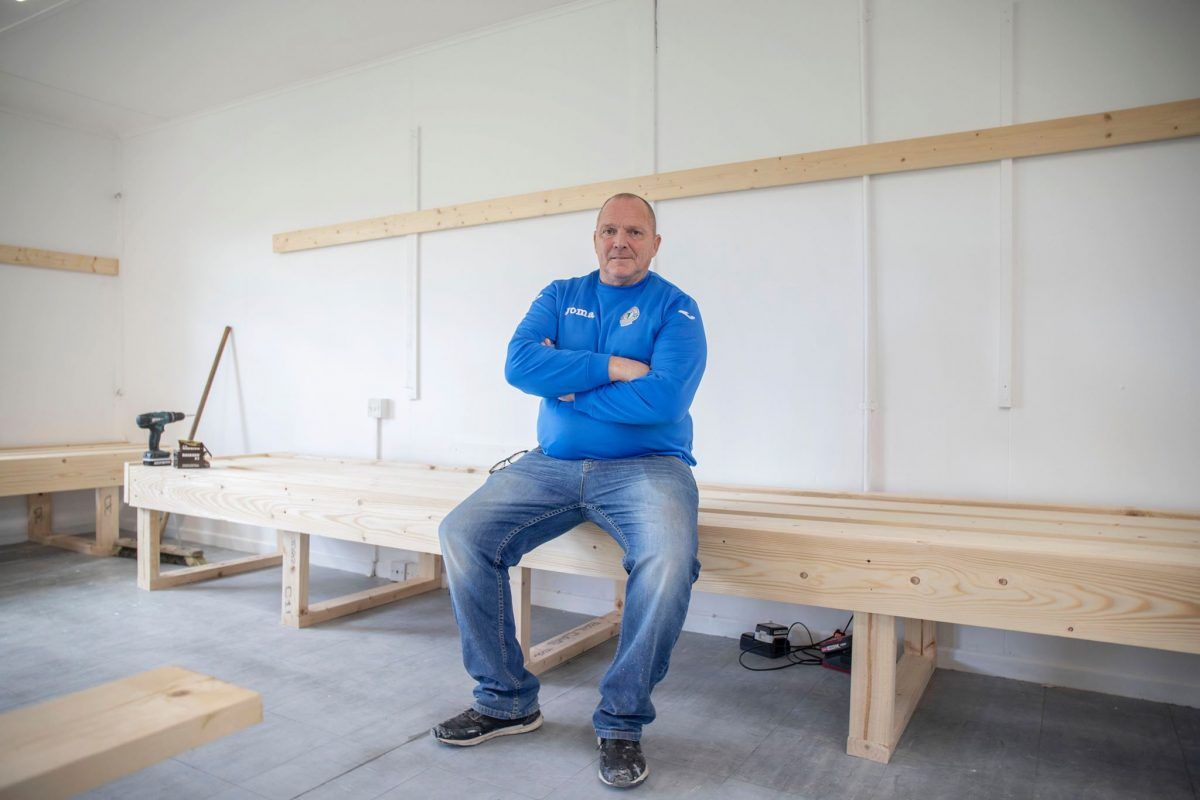 “Finn Park has been more like home than my own home lately,” he says. “But I’m delighted that we can finally say that we have respectable changing rooms here.

“I felt like I’ve never left it. We had the August 4 date and we had to meet that. The place is quality now. We had all the necessary work done. They had to be gutted and done from scratch to get what we need.”

The likes of Ronan Steade, Mark Barron, David Crawford, Seamus Gallagher, Mark McKinney, Dougie McNulty and Michael Grant are name-checked by Harvey as being key to the works in recent weeks.

He said: “People gave up a lot of time for this. I was just around to give a hand with whatever, be it piping, blocks, timber, just what needed done. The whole thing was only finished about 2 o’clock, but we got there.

‘The units are quality and they have facilities where Ollie can have meetings with the squad. Michael Grant installed a TV and a projector so they can do all that work.

“A lot of people might have said don’t spend this, or don’t spend that, but this work was needed or we wouldn’t have been able to play at Finn Park. There was nearly €18,000 of work done before we had anything taken in, which shows just how much this was needed.

“But these units can be lifted again and used anywhere.If we get the new stadium, for example, there is no reason that the units couldn’t be taken over to the stadium for use there or be taken to the academy ground in Killygordon. Yes, they’re a short-term solution but they can be used in the long-term.”

He wasn’t going near Finn Park on Tuesday but, with St Patrick’s Athletic in town on Monday, Ivan has his mind on some odds and ends to add to the work.