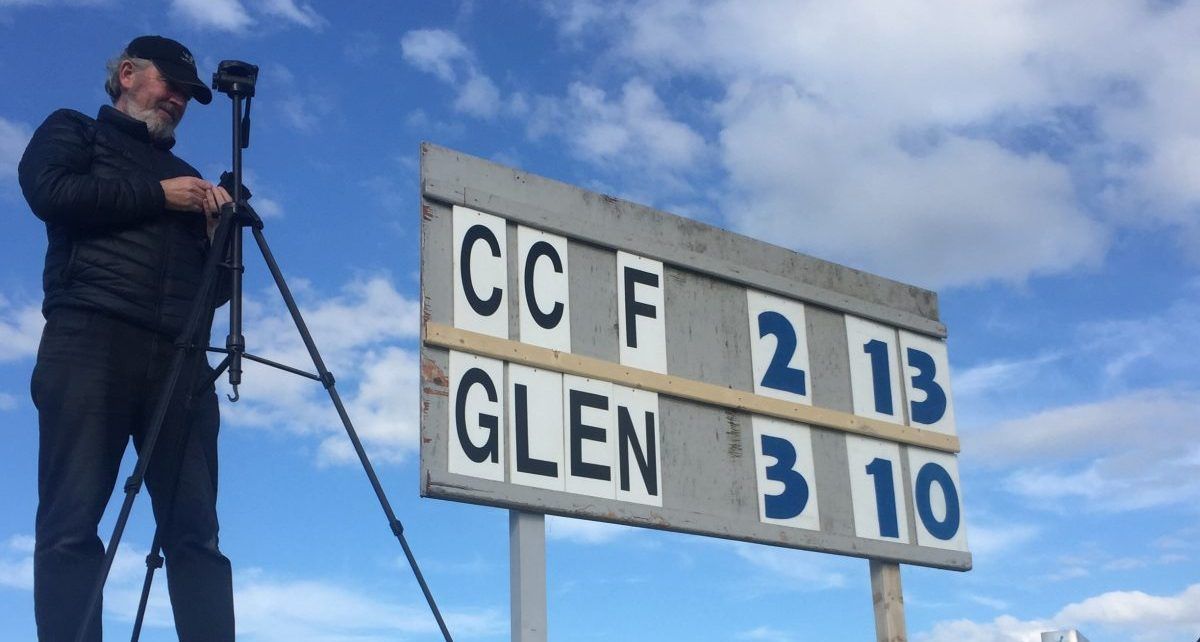 IN THE END, a draw was perhaps the fairest result in a titanic battle at PCC Falcarragh, where Cloughaneely were seven up at one stage and then four down at another in their draw with Naomh Columba.

Both camps weren’t over enamored with a share of the spoils at the end, with the hosts claiming with some justification that John McGarvey had been tugged for a penalty at the bitter end, while the guests had blown a four-point lead with three minutes plus stoppage time to play.

But players like Aaron Doherty – who scored 3-2, two goals from penalties – and Paul Sweeney, who grabbed a brace of goals for the second week in a row, didn’t deserve to lose.

Doherty’s hat-trick came in the second half and Ryan Gillespie in the corner was also a thorn in the Cloughaneely side who were 2-4 to 0-3 up two-thirds of the way through the first half.

Sweeney continued where he left off last week. The full-forward had grabbed two goals eight days’ ago against Gaeil Fhanada in a 2-12 to 1-12 win for Michael Lynch’s team in Portsalon and he repeated the trick closer to home.

Today, Sweeney’s first was a fourth minute effort when he beat Gerry McGill to finish off a move that included John Fitzgerland and Martin Maguire to give the home team a 1-1 to 0-1 lead.

However, the visitors, who got past Naomh Brid last week, hit back with points from Kevin McNern and Ryan Gillespie. But on the ninth minute Sweeney was on hand to continue his hot streak when he slapped home a center from Fitzgerald.

Pauric O’Donnell’s Naomh Columba were guilty of passing up chances but Lanty Molloy and Ryan Gillespie’s scores late in the half to leave it 2-4 to 0-5 for Cloughaneely at half-time.

Aaron Doherty scored a 34th minute penalty for the away team after he himself was fouled and Naomh Columba were just the one down. Shaun McClafferty in the Cloughaneely goal had to get down low to save a Ryan Gillespie shot that was destined for the bottom corner.

Fitzgerald’s free and two points on the run from Kevin Mulhern meant Cloughaneely were 1-7 to 0-6 in front on 40 minutes. Aaron Doherty, though, on 42 minutes, scored a second Naomh Columba goal from close range from a Ryan Gillespie pass and his team were just one down again, 2-7 to 2-6.

Ryan Gillespie was then fouled by Ciaran Scanlon and referee Enda McFeely awarded a second penalty to the Glen side. Aaron Doherty got the better of McClafferty from the spot again and when Ryan Gillespie pointed, it was 3-7 to 2-8 going into the final water break.

Shaun Curran’s two frees in the final quarter brought the home support some hope and then when Conor Coyle scored, Cloughaneely were just the one down, 2-11 to 3-9, with three minutes plus injury time left.

John Fitzgerald brought Cloughaneely on terms with a free only for Ronan Gillespie’s point to sneak Naomh Columba in front in the last minute and the home team were denied a penalty in injury time when John McGarvey appeared to be tugged. Ryan Gillespie was dismissed for picking up a second yellow.

Coyle, though, managed to square it up and although both teams might claim they should’ve won it, they both could’ve lost it as well.