OLLIE Horgan has hit out at the League of Ireland’s busy post-lockdown schedule.

Finn Harps lost for the third time in a week last night, going down 2-0 against St Patrick’s Athletic at Richmond Park.

After defeats to Shamrock Rovers and Shelbourne, Harps are back in action when they host Pat’s in the FAI Cup on Monday night.

“I can’t see the rationale in coming back after five months off to play four games in nine days,” the Harps manager said.

“We’ve had to patch up lads who shouldn’t be playing. It’s madness and it’s wrong.

“The one positive is that we can make five substitutes, which limits the game time.

“The people who made this decision must have a better medical background.” 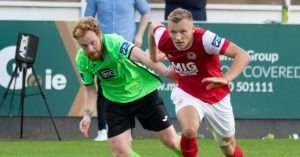 A first-half brace by Tooban native Georgie Kelly – on loan from Dundalk – sealed the win for Pats.

Horgan said: “Pat’s didn’t have to come out of second gear – that’s the most disappointing thing for us.

“We huffed and puffed and dug in, but the damage was done and we did it ourselves

“There wash’’t a wide gap between sides. Yes, there was gap and better side won but let we have a helping hand.

“We’re disappointed that we gave them the head start and couldn’t claw it back.”