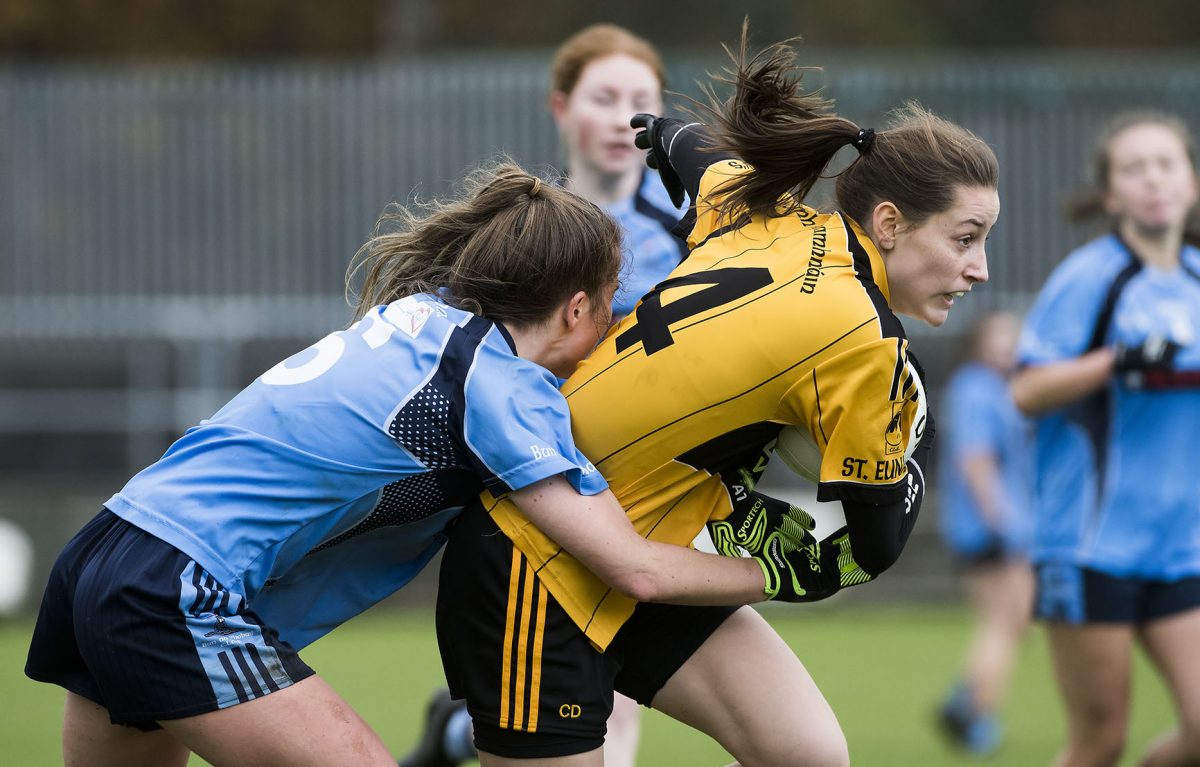 CLAIRE Doherty scored a lethal 4-2, all from play, as St Eunan’s ladies marched to a vital win over Gaoth Dobhair.

In the morning sunshine at O’Donnell Park, Doherty (pictured above by Evan Logan) top-scored for Alan O’Connell’s team, who needed a big win with score difference a possible factor in advancement to the latter phase of the Intermediate Championship.

Doherty netted twice in the first half and Anna Flanagan bagged the other goal as St Eunan’s led 3-11 to 1-1 at the break.

St Eunan’s were in cruise control in the second half and there was still time for the deadly Doherty to add another two goals.

Gaoth Dobhair kept battling to the bitter end, driven by the always-eager Sarah Ní Ghallchóir from centre-back while Etaín Haicéid scored 1-3 for the visitors.

The opening goal of the morning arrived after only ten minutes with Doherty riffling low beyond Gemma Ní Fhearraigh, the Gaoth Dobhair goalkeeper.

That came just after a timely interception by Ní Ghallchóir prevented Shauna McFadden from batting to the net from Doherty’s centre.

By that stage, early scores by Flanagan, Doherty, Clodagh Brennan and Niamh Walsh – who scored seven impressive points for the hosts – had St Eunan’s four in front.

Two goals in as many minutes on 17 and 18 put the game firmly beyond doubt.

A lovely point by McFadden and a good passage that ended with Walsh tucking over from the right extended the advantage before St Eunan’s hit the brace of three-pointers.

Flanagan found the bottom corner of the Gaoth Dobhair net with a clinical finish and Brennan fed Doherty, who made no mistake.

Doherty, fed by a tidy pass by Flanagan, might have sealed her hat-trick, but shot across Ni Fhearraigh and narrowly wide.

Gaoth Dobhair, with their hopes of advancing from the group phase already gone after a trio of defeats to Milford, Naomh Muire and St Mary’s, Convoy, battled gamely and Haicéid registered their opening score of the day on 19 minutes.

Late in the first half, Haicéid engineered a chance for herself and retained the composure to tuck home to the net under the advancing Aishling Nee, but at the break St Eunan’s haas a comfortable 3-11 to 1-1 advantage.

Four minutes into the second half, Naomi McMenamin provided the assist and Doherty finished off the excellent move to seal her hat-trick.

Eleven minutes from the end, Doherty added her fourth of the day, firing home after McFadden’s initial attempt was blocked.