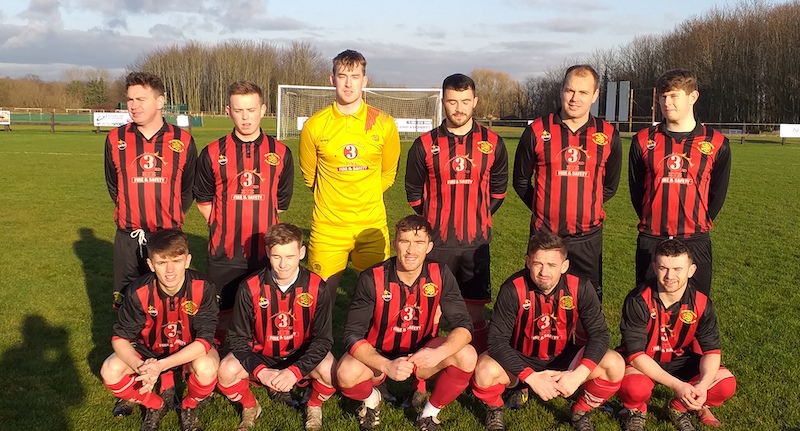 Castlefin’s hopes of retaining the Premier title ended on Sunday when Kildrum beat them 4-1.

Kildrum opened the scoring in the 10th minute with a long-range strike from Kevin Mc Hugh. The home side went close through Shane Gallagher but his shot was dealt with by the Kildrum keeper. Brian Breslin doubled Kildrum’s lead when he received a through ball and chipped the keeper.

Castlefin pushed hard at the start of the second half, trying to get back into the game but the away side struck again in the 68th minute when Mc Hugh converted from the penalty spot after a foul in the box.

Mc Hugh completed his hat-trick in the 81st minute when he broke free down the right and fired home. Castlefin pulled one back in the dying minutes when Lee Kennedy broke down the left and crossed to Rory Dalton who tapped the ball into the net.

Dara Patton brought his Hoops side into Sunday’s encounter on the back of three league wins to put them in contention for the Play-Offs but knew that only a win would suffice and his side duly delivered.

The Hoops opened the scoring on 23 minutes from a fine headed Chris Kemp goal following an inswinging Kevin Doran corner which was deserving after their dominance over the visitors. However, Ballybofey came right back into contention after the water break and equalised in what was their only real attack of the whole game.

Winger Dillon Murphy volleyed inside the area on 25 minutes following a fine United move which was also a wake up call for the Seasiders. From then on, it was a Hoops masterclass with attacking football which saw United keeper pull off fine saves to deny Eoin Sheridan and Reggie Miller. With half time beckoning, Niall Carruthers produced that magic that few can ever dream of on 40 minutes to reclaim their lead.

The wizardry winger picked up the ball in the centre circle before beating the United and unleashing an unstoppable strike into the top right corner of Patton’s goal from 25 yards. Kevin Doran assured the win on 70 minutes when the midfield maestro quickly closed -down United full back John Doherty before calmly slotting past the out-coming Patton in goals. Reggie Miller then saw a thunderbolt strike from outside the area crash off Patton’s crossbar. Alawiye finally got on the score sheet on 79 minutes to complete the victory.