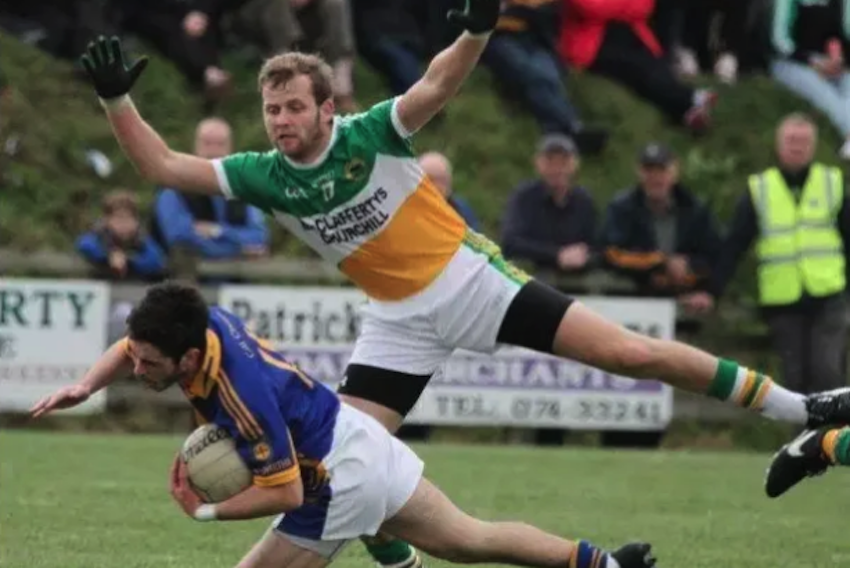 Glenswilly do just enough for win over Four Masters

IT WAS by no means routine, but Glenswilly got off the mark in the 2020 Donegal SFC with a four-point win over Four Masters this evening.

Goals late in the first half by Kealan Dunleavy and Leon Kelly (pictured) – in between a three-pointer by Four Masters’ Jamie Crawford – helped keep Glenswilly far enough in front.

Their nerves might have been tested further had Kevin McBrearty hit the target with a penalty ten minutes from time.

Spurred by seven points off the boot of Michael Murphy, the competition’s sponsor, who also had a hand in both goals, Glenswilly will be relieved to have earned victory here following a defeat at St Michael’s last weekend.

Glenswilly’s guard has changed since last year with the likes of Neil Gallagher, Gerard McGrenra, Joe Gibbons, Brian Farrelly and Ciaran Bonner gone from their ranks.

The Glen men – three-time Dr Maguire winners in recent years – began here with eight players under the age of 23.

The first-half majors gave Glenswillt the breathing space they needed as Four Masters – aided by McBrearty and Crawford – just wouldn’t go away.

A fine ’45 by Murphy. for his sixth of the evening, had Glenswilly 2-12 to 1-9 in front midway through the second half.

Cian Randles, Glenswilly’s young goalkeeper, made saves to deny Killian Faulkner and Jamie Crawford in the second half, while Kevin McBrearty spurned a 50th minute penalty, a golden chance to bring the Donegal town side right back into it. After Caolan Kelly fouled Crawford, McBrearty fired high and wide from the spot.

The big midfielder had just brought his side to within five with a tidy point from play,

Four Masters were down to 14 men right from the start. Only 12 seconds had passed when Cathal Canavan’s foul on Dunleavy earned the Four Masters corner back a ten-minute stint in the sin bin.

Murphy tapped over the free, but Four Masters briefly led when Kevin McBrearty and Faulkner knocked over frees at the other end.

Murphy angled a superb delivery – one that he’d have relished taking receipt of himself – into Dunleavy to fashion a goal chance in the fifth minute. Shaun Wogan was on the end of the move, but Four Masters snuffed the danger.

Caoimhinn Marley, after a one-two with Murphy, levelled things up and Glenswilly hit the next five points to move into command.

A surging run forward from Mark McAteer drew a foul and a free from which Murphy added to his tally, while Marley and Dunleavy were also on the mark during that spell.

The first-half ended in a flurry of goals.

Murphy was at the controls for the opening goal and the impressive Dunleavy – still a minor this year – showed the coolness of a seasoned protagonist as he tucked past Martin Cassidy.

Four Masters hit back and Crawford shrugged off a number of Glenswilly arms before firing past ‘keeper Randles.

With only a three-point deficit, Four Masters would have had new life, but the concession of a second goal in added time took the wind from their sails as they parted ways for the interval.

Murphy’s paws were all over the goal. The Donegal captain laid on the chance with a magnificent lofted pass with his fist. The ball left the Four Masters rearguard for dead and Kelly finished well.