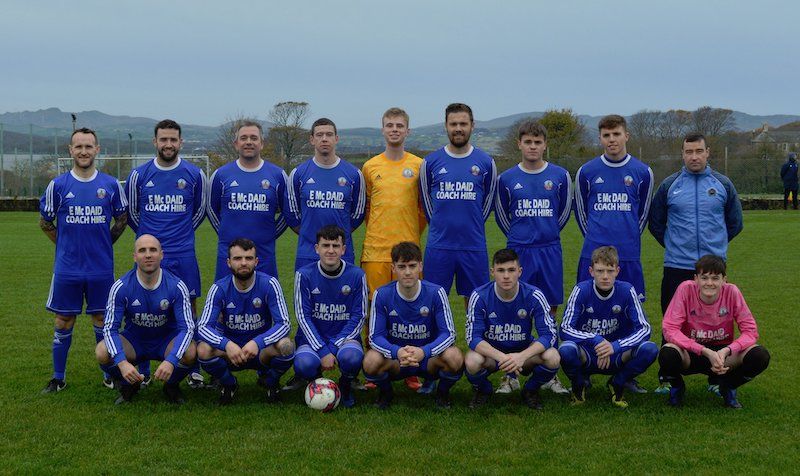 Buncrana Hearts threw the title race wide open and in the process put themselves in the mix for league honours with this excellent victory in Jackie Crossan Premier Division ar Aileach FC.

This game started at a furious pace with neither team getting any time on the ball. Buncrana were the first to threaten on 10 minutes when Bart Wesolowski got away from his marker but his tame effort from the edge of the box was easily dealt with by Kyle Dougal.

Aileach responded when Ethan Canning found space on the left and fired a fierce drive from the corner of the box which Eoghan O Doherty did well to parry it out  for a corner. After 15 minutes Ethan Canning got to the bye line and crossed for Aaron Nash but the number 9 missed his kick with the goal at his mercy. From the same move Dermot Doherty retrieved the ball and crossed for Gavin Doherty to power a header narrowly wide.

The home side would soon pay for those missed opportunities when on the half hour Aaron McDaid pounced on a loose ball and curled a 20 yard effort just inside Dougal’s left hand post. Five minutes later, Aileach broke forward and Darren McMonagle outpaced his marker but his shot could only find the side netting.

It got worse for the home side a minute later when a Shane Dillon free from the corner of the box made its way into the net via a deflection. On the stroke of half time, Aileach spurned a great chance to pull a goal when Darren McMonagle crossed for Aaron Nash but the number 9s header from four yards was somehow pushed onto the bar by O Doherty and scrambled clear.

Aileach started the second half on the front foot and on 55 minutes, Nash crossed for substitute Gareth McGlynn but his header under pressure cleared the bar. Just as the home side were beginning to get a foot hold, they suffered a sucker punch when Eoin Murphy got possession following a defensive mix up and fired low past Dougal’s right hand post.

The home side finally got on the scoresheet when Gavin Doherty latched onto a McGlynn pass and fired an effort which O Doherty could only parry into his own net. As it turned out it was too little too late as Buncrana were able to kill the game and run out comfortable winners in what was a very lacklustre performance from the home side.

They continued to press and when David Doherty burst into the area he was only denied by a superb Darragh Browne tackle. Greencastle came more into the game midway through the half and Nigel McMonagle turned well inside the area but his effort was well saved by Kevin Gallagher, before Jamie McCormick rattled the crossbar with a twenty five yards free kick before he fired another one over the bar. In a swift break Illies went close with Adrian Donaghey Doherty denied by the legs of Dylan Doherty and at the other end McCormick evaded two tackles and found McMonagle  but Gallagher blocked with his legs. On the stroke of half time Illies broke the deadlock in controversial fashion.

The home defence appealed in vain for a goal kick and when a scramble ensued in the area the ball broke to Brendan Doherty who slammed it home. Greencastle started the second half well  with Conor Gillen firing over before McCormick was denied by a fine save from Gallagher.

Illies responded and Donaghey Doherty  raced clear but Dylan Doherty blocked with his legs. The home side  had a good spell then with McMonagle twice denied by good saves from Gallagher. Greencastle equalised on 75 minutes after McCormick shrugged off a couple of challenges and threaded a pass into the path of  Jason Dickson  who calmly slotted past Gallagher.

But Illies responded well and regained the Lead minutes later when substitute Gavin Doherty won possession in the Greencastle half and advanced to drill past the advancing Doherty. The home side salvaged a point on 86 minutes when a long pass from Rowan released McMonagle  who expertly controlled before drilling home from ten yards.

The score line is a little harsh on the home side who were well in the game until the opening goal arrived on 25 minutes and this after Cockhill had a man off getting treatment.

To Glengads credit they took the goal well when Fionn McClure found Joe Doherty in space on the left and his early ball into the box was pounced on by the ever-busy Stephen McLaughlun  who shot low past Liam McGonagle in the home net from eight yards out giving the keeper no chance.

Cockhill responded well and should have levelled matters on 30 minutes when Michael Owen Doherty powered a header wide after a great corner delivery from Adam McLaughlin. McLaughlins deliveries were quality and another delivery from a left-wing corner should have been the leveller but lack of communication from a couple of home players saw the chance go

Glengad always looked for the pace of Stephen McLaughlin in behind with Joe Doherty proving a real handful for the young Cockhill pairing of Odhran O’Brien-Daly and Ryan Downey, at 16, make his first competitive start for the Youths.

Glengad hit Cockhill for a second on 64 minutes when McLaughlin  and Conor Barrow combined well on the right for the latter to produce a great cross for Joe Doherty to power a header to the net from the edge of the six yard box on the left.  After a stoppage of play on 73 minutes Cockhill were not tuned in and got caught from a short goal kick for Stephen McLaughlin to nip in and score past McGonagle. Not what the home side deserved in a game that they performed well in but its Glengad with their experience that win it by three  nil and keep in the hunt for another league title.

Greencastle had the first chance of the game when after a foul on Shea Mclaughlin, Gavin Rowan fired his free kick just over the bar. The visitors took the lead 6 minutes in when after a quick build up, Conor McDaid fired home from  twenty five  yards out.

Mclaughlin for Greencastle then had a twenty yards  yard effort blocked before Jason Dickson broke in to the rasheney box but keeper, Paddy McGilloway, gathered at his feet. Rasheney increased their lead midway through the half after  John Mclaughlin hit a low shot from twenty five  yards with the ball swerving in to the bottom corner giving keeper Seamus Bovaird no chance.

The home side replied with Keenan McClaren seeing a free saved and Darragh Gillen heading over. Greencastle did get  a goal back with 43 minutes of the first half gone after Rowan took possession in midfield before  playing  a lovely through ball to McLaren who skipped past a couple of challenges and produced an excellent finish from the edge of the box. Rasheney pressed at the start of the second half and a dangerous Conor McDaid cross was well gathered by Bovaird.

David Mclaughlin was then well tackled by Shaun Cavanagh as he was about to shoot on the edge of the area. At the other end a Rowan free kick found Dickson who shot just wide of the left hand post.

Dickson then advanced in to the Rasheney box, turned, but had his low right foot shot tipped round the post by replacement keeper, Roger McGilloway. The keeper then saved a Dylan Doherty header from the resulting  Kevin Mclaughlin corner. McGilloway had to be alert as he  raced from his line to gather at the feet of Dickson as the home side piled on the pressure.

That pressure told on 85 minutes when they  got a deserved equaliser . After good build up play the ball broke to the evergreen Shaun Cavanagh twenty five yards out, who took a look up, then hit an unstoppable effort to the top corner giving McGilloway no chance. There were chances at both ends in the closing minutes but both keepers made excellent saves. The final whistle blew with the score finishing two two and the retiring Shaun Cavanagh after a 30 year playing career with Greencastle FC being applauded off by his fellow team mates and supporters.

Despite dominating the game for long periods the visitors failed to convert their superiority into goals and paid the price late on. The home side kept them at bay until the 21st minute when after good work by  John McCloskey in midfield he released Caolan McColgan to fire high past Michael Mclaughlin in the home goal. They almost added a second on 41 minutes with David Healy finding Josh Boyle but his rising effort  was tipped over the bar by McLaughlin. QPS continued to press for that elusive second goal on the restart and  McColgan twice, Healy and Boyle were all off target with efforts from around the edge of the area. Glengad stunned the visitors on 81 minutes after a corner broke to John G McDermott and he flighted a superb cross for PJ McDaid to head past Oisin Burke from ten yards. They almost recorded a shock victory in the 87th minute when Jason Doherty somehow blazed over from point blank range after the ball fell nicely to him from a corner.

This end of season clash was an entertaining affair played in a  good spirit.The game opened very evenly with most the play in the midfield with Dunree on top. On 15 minutes a free kick by Kyle Barrett in a good position was ballooned over the bar.

Then a  great ball by Tommy Mulhern split the Redcastle defence but Conor Barett was denied by the legs of Michael Mc Cole in the visitors goal. A brilliant strike by Kyle Barett shook the crossbar from thirty yards out before the breakthrough came on 35 minutes.

But  against the run of play when a  Redcastle corner by Darragh McConway was turned home by McColgan at the front post following some sloppy defending. Redcastle had the chance to double the lead on 40 minutes when a poor back pass let Darren Harkin in on goal only to be denied by a superb save by Sean Doherty in the home net.

The visitors were well on top and were denied again on the stroke of half by the cross bar following a powerful header from Darren Harkin. Dunree started well after the break and were awarded a penalty in the 49th minute when Ryan Bradley was upended. Jamie Brosnan coolly sent the keeper the wrong way to equalise.

Two great saves by Sean Doherty in succession kept the scores even on the hour mark denying McColgan and McConway. Dunree substitutes Jamie Brosnan and Eoin Doombes combined on the 65th minute with the later missing by a  whisker.The rest of the game was a tight midfield battle with neither side producing enough to seal the points.