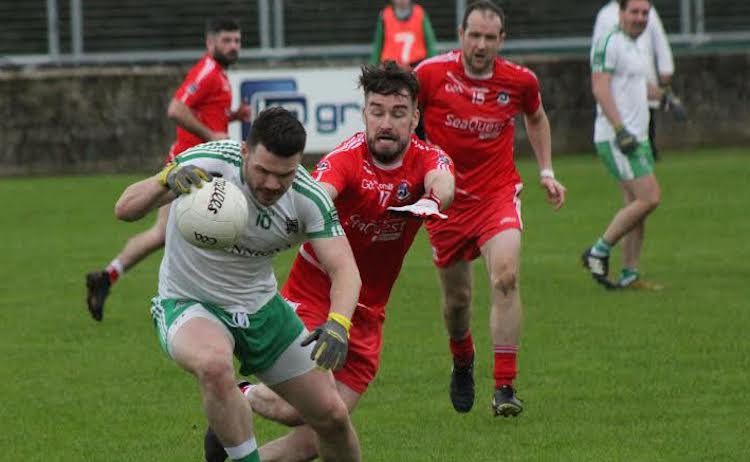 MacCumhaill’s come through fighting to see of Dungloe

A goal by Padhraic Patton was ultimately the difference as MacCumhaill’s defeated Dungloe at Rosses Park, writes Charlie Collins.

The side from the Twin Towns are now two from two following their 1-10 to 1-9 win over Ardara last week, while Dungloe have come up just short for the second successive week having gone down 1-14 to 1-13 at St Naul’s last time out.

It was all square at half-time, 0-5 to 0-5, with the visitors having taken an early three-point lead with Chad McSorley and Oisin Gallen scoring frees and Martin O’Reilly adding from play.

However, they were glad to get in level as Dungloe had come back to lead by one – with Daniel Ward hitting three, Noel McBride and David McCarron also on the mark  – before Gallen squared it up before the break.

Playing down the hill, Paul Rose’s MacCumhaill’s started the second half well with an unanswered 1-2. The points came from Gallen and Luke Gavigan before Patton’s goal on 41 minutes, when he fisted home a long ball in from Steven O’Reilly for a 1-7 to 0-5 lead.

Darren O’Leary came off the bench and his two scores meant that with time almost up MacCumhaill’s went out to six in front, 1-10 to 0-7.

Four successive Dungloe points in injury time, with Ward scoring three and McCarron also raising a white flag, made for a sweat. But Alex McGeehin got one for MacCumhaill’s to confirm the win.

MacCumhaill’s come through fighting to see of Dungloe was last modified: August 9th, 2020 by Alan Foley