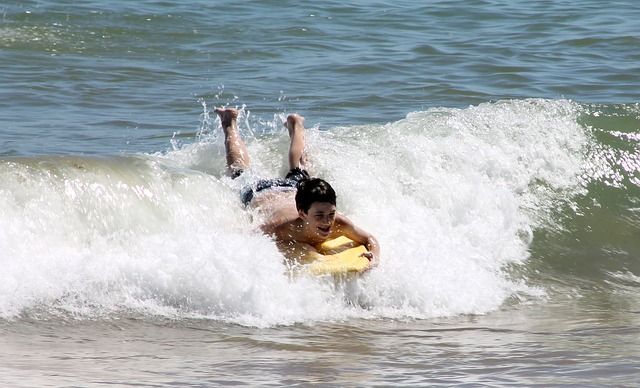 Fears raised over body boarders drifting out to sea

Concerns have been raised about the safety of bodyboarders at a Donegal beach after near-miss incidents in recent days.

The beach at Ballyhiernan Bay in Fanad is popular with surfers due to the swell and exposed location.

But inexperienced people and families taking to the water on bodyboards have sparked fears over the impact of strong currents.

A local beachgoer shared their concerns with Donegal Daily after witnessing two incidents of people being caught and brought further out to sea.

“People need to heed the warnings for strong currents at particular beaches,” they said.

The first event was early last week: “The sea was very rough that day. There were huge swells and strong currents and I could only glimpse the two people as the waves rose and fell.

“Luckily a surfer paddled out and managed to pull one of them in. The other guy managed to eventually get in himself.

“Given the conditions it was a scary situation which ended well thanks to the surfer.”

Another rescue was reported at the beach on Sunday (yesterday).

The beachgoer said: “My daughter was surfing and asked me to make a video with her phone. I was so busy doing this that I didn’t notice the two people on body boards who had drifted out until I saw a man run past me carrying a life ring.

“He was able to wade out until the water was about chest height and then he threw the ring to one of them and pulled them in.

“Three other men who were in the water went over and helped the other person.

“When they came in I saw that it was a woman and a boy, presumably her son. They looked a bit shaken.”

The beachgoer added: “I just think that people should be more careful especially at a beach they don’t know. There are signs for strong currents at Ballyhiernan Bay, maybe people don’t notice them.”

Beach Lifeguards are on duty at 13 beaches in Donegal from Saturday 27th June until the end of August and also for the first two weekends in September. They are: Bundoran, Rossnowlagh, Murvagh, Fintra, Portnoo/Narin, An Charraig Fhinn, Killahoey, Marblehill, Na Dúnaibh, Portsalon, Rathmullan, Culdaff and Stroove.

To ensure your beach visit is a safe one, Donegal County Council encourages bathers to;