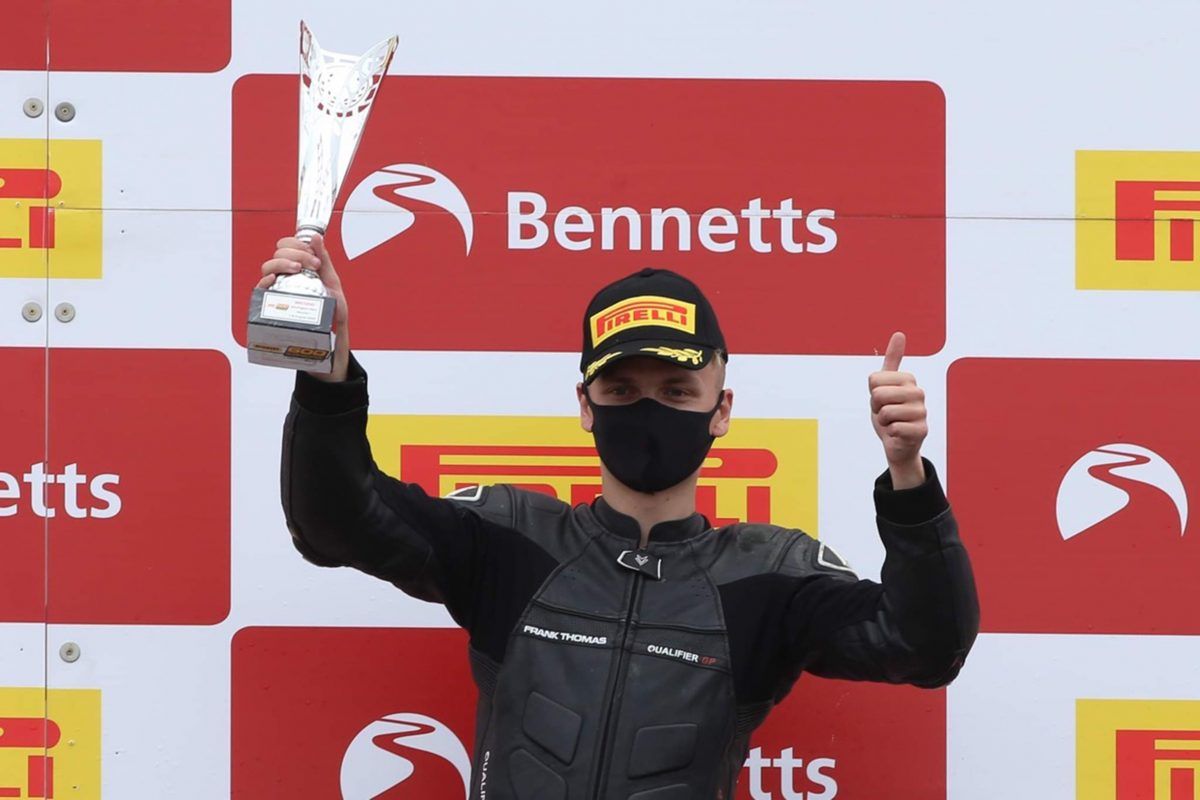 DONEGAL brothers Caolán and Rhys Irwin made up for the long delay to the start of their 2020 British Superstock 600 campaign with an excellent weekend at the opening round of the British Superbike Championship at Donington Park.

Caolán, the older and more experienced of the brothers, began his 2020 title challenge with an excellent second place and fastest lap of the race, while Rhys began his first full season in the championship with a brilliant recovery ride, from eighteenth on the grid, to finish eighth and take his best result in the British Championship so far.

Having tasted victory for the first time last year and run at the front at most events, Caolán Irwin started the Donington weekend as one of the favourites for the 2020 title.

With limited testing due to Covid-19 restrictions the Kilmacrennan based rider used the Donington weekend to acclimatise himself to his new Astro Van Centre Team JJR Kawasaki and built up his speed across Friday’s practice sessions.

Caolán’s first run in Saturday’s qualifying, on old tyres, was good enough for fourth place, but as he started his second run, on new tyres, his bike cut out, robbing him of the chance to go for pole. Despite not getting a run on new rubber, Caolán still lined his Principal Insurance, RK Racing and J&S Accessories machine up fourth for Sunday’s race.

Riding in the same class Rhys Irwin was on-board the Irwin Racing Yamaha that he had used at the end of 2019 to dip his toe in the British Championship water. Continuing to get used to the Oasis Bar and Mondello Park sponsored Yamaha, Rhys was making steady progress up the time sheets until mechanical issues in qualifying halted his progress and left him further back than expected.

At the start of Sunday’s race, Caolán got a good getaway to lie fifth at the end of lap one. Lap two saw him up to fourth before he made it into the top three on the next lap and stayed there till the closing stages of the race.

Rhys too was making progress and by half distance he was into the top ten and running his fastest laps of the weekend.

With five of the twenty laps left to run the youngster grabbed eight place and held on to that spot over the remaining laps, to finish just eleven seconds behind the winner.

Up front Caolán was running in third and he too was setting his fastest times of the weekend. With three to go the Irish rider set the fastest lap of the race, as he mounted a challenge for second and going into the final corner he grabbed the runner-up spot to get his season off to a flying start by taking his best ever finish at Donington.

Speaking after his second place result Caolán said: “From Friday’s practice we were working to get the bike just right as it was my first race weekend with the new team.

“When I was able to take fourth in qualifying on an old tyre, I knew we were going in the right direction and that I would have the pace when it mattered, on Sunday.

“My Astro JJR team did a great job and I have to thank everyone who helped us to get into a position to fight for the podium this weekend especially Wes, Jake, Arny and my Dad. To finish second at Donington, where I have never gone as well before, is a great result and gives me real confidence for the year ahead.”

Happy with his weekends work, Rhys said: “To finish in the top ten on my first proper weekend in the series is brilliant, I didn’t expect to be this competitive so soon. Having not had any testing due to the current restrictions we had to iron out a few problems in practice and qualifying, which slowed my progress, but I’m delighted to have made it so far up the order from such a low starting position. We’ve a long way to go but this weekend was a really positive start.”