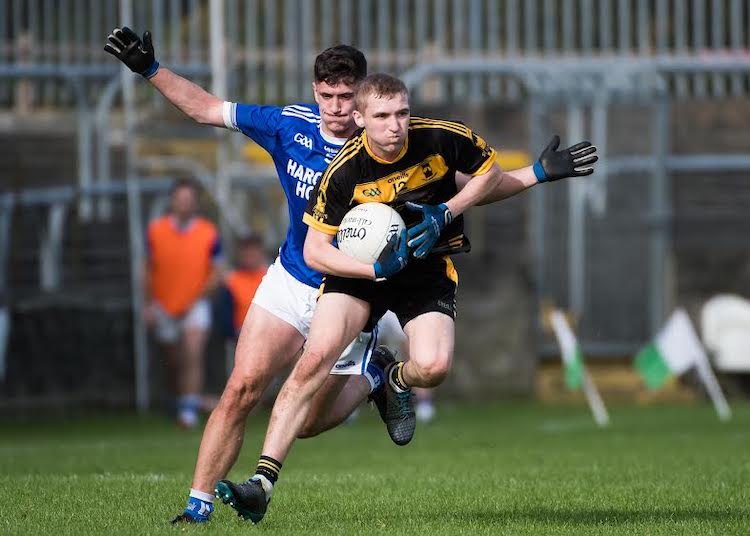 RICHARD Thornton has no problem in thrusting St Eunan’s young players into the glare of the Donegal SFC.

The Letterkenny side, beaten semi-finalists last year, came from seven points down on Friday to earn a home draw with Kilcar.

Picture: Brian MacIntyre, in action against Naomh Conaill in the 2019 Donegal SFC semi-final, is among the young guns who has emerged at St Eunan’s. Picture by Evan Logan

Last year, St Eunan’s were only pipped by eventual champions Naomh Conaill in the last four.

On Friday night, a Patrick McBrearty goal from a penalty sent Kilcar into a big lead – but St Eunan’s hit back.

“We needed a big reaction at half-time,” Thornton said.

“The fellas stepped it up in the second half.  We should possibly have won it at the end. We had a possession, we worked hard to get the ball back several times, but didn’t show the composure we needed to get the final score for the win.

“It took far too long to get the fire in the belly. You shouldn’t have to wait until half-time or the water break in the second half to get that.”

St Eunan’s have won the last two U21 and three out of the last five minor championships and Thornton is encouraged by the black and amber’s young guns.

He said: “We’re learning with a young team, but there is plenty of want, plenty of desire there to get to the quarter-final and qualify through. It’s learning for a lot of them.

“I have no problem putting anyone in if they’re playing well and their form is good. It doesn’t matter what age they are. It’s a very fast game and you need legs and people wanting to play. If they’re going to make a difference I’ll throw them in.”

St Eunan’s had Niall O’Donnell sent off late in a game they might have won had the maintained momentum.

“Happy not to be beat, not happy not to win,” was how Thornton assessed it.

St Eunan’s go to Killybegs this Sunday evening for their latest assignment, a game that brings Thornton up against Rory Gallagher, who first recruited Tyrone native Thornton into Donegal when he the county team manager.