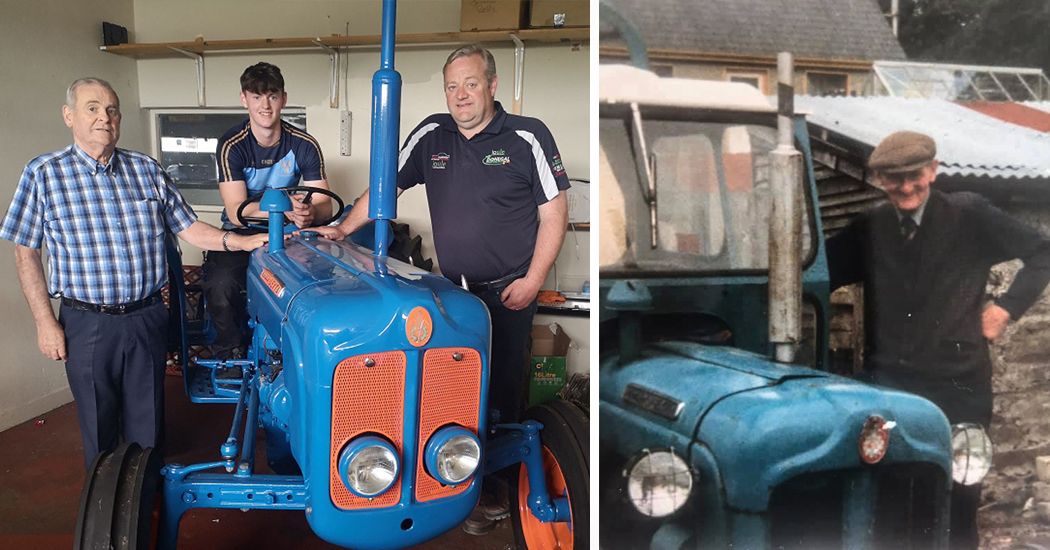 In January next, 60 years will have passed since a wee Fordson Dexta drove out of the garage doors of the Main Ford Dealership in Letterkenny.

A young mechanic sourced the tractor for his father while having a chat at what was one of the biggest meeting points in Letterkenny at one time, The Letterkenny Livestock Mart. Young Thomas Keys had a chat with one of the McClean Brothers from McClean and McLaughlin Main Ford Dealers, who traded in his father’s old grey diesel for a new Fordson Dexta. 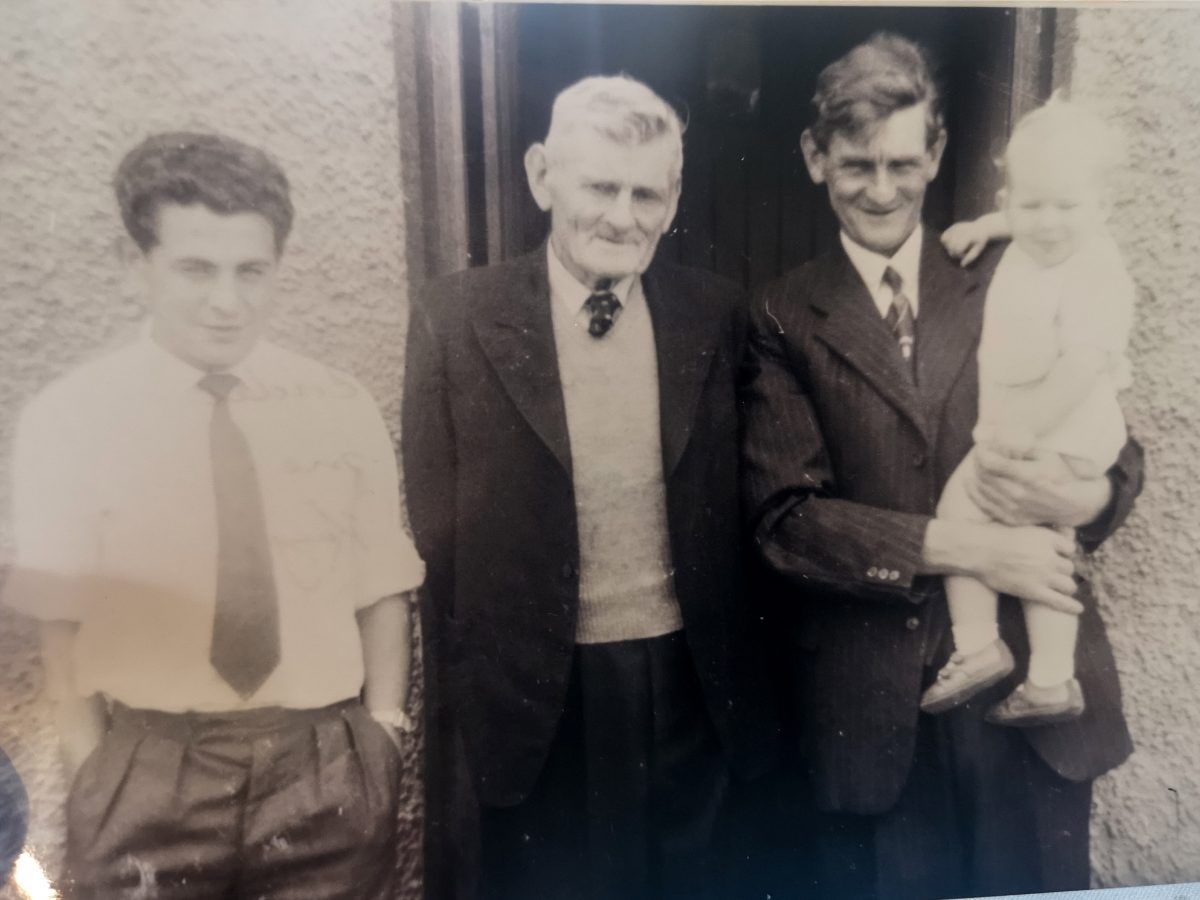 Four generations of the keys family at the from door of the family house at Sentry Hill. From Left Son Edward, Father of Tommy Keys , John, and Tommy Keys holding his grandson Joseph Harte.

This story is a little more local.

‘The hill’ in this is the name that the family affectionately called their home which was built on Sentry Hill in Letterkenny and their wee blue tractor.

Sadly all that era in Letterkenny is gone without a trace and the Cathedral car park has swallowed everything, even if they are never used to their full potential but the wee blue tractor has survived to bring back these memories. 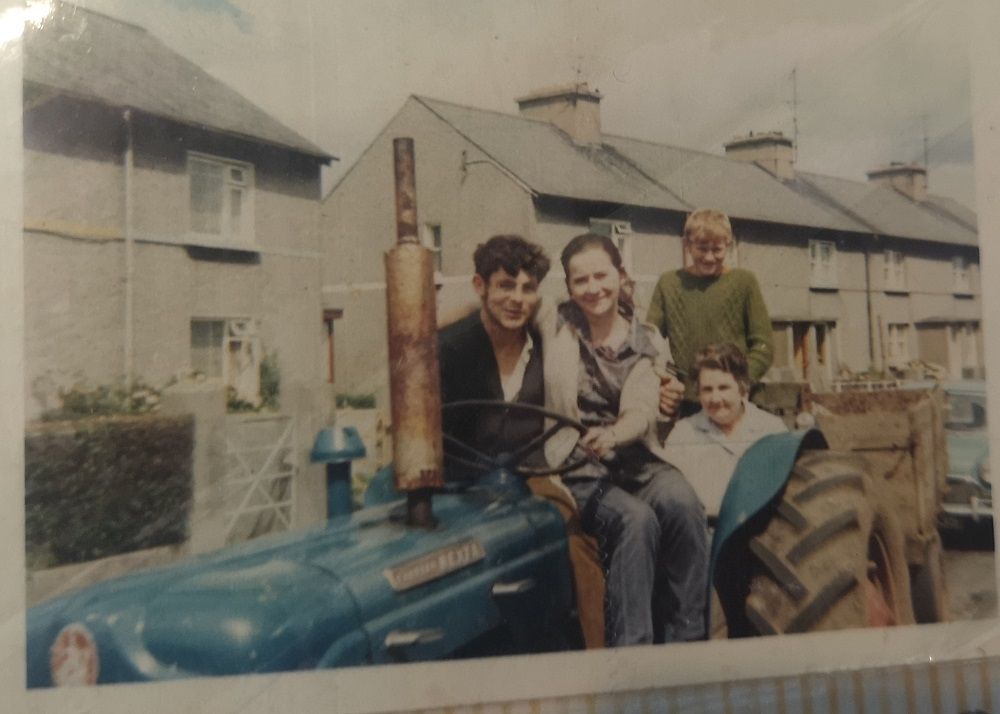 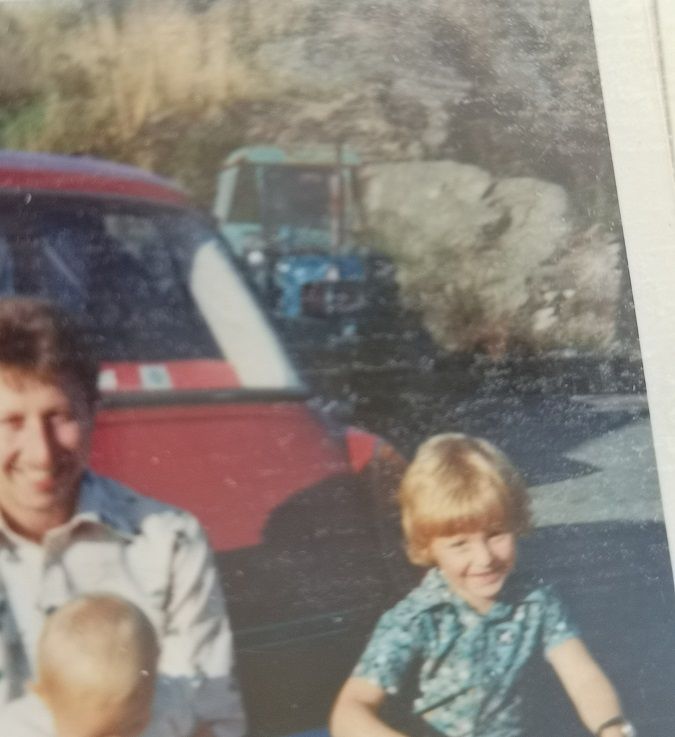 Grandsons Anthony and Gareth Gorman at Sentry hill with their father Tony and in the back gourd Tommy Keys tractor with one of many cabs it had fitted in the background.

Since 1961 that wee blue Fordson was a familiar sight driven by a tall man, always wearing a cap in a small tractor cab coming and going to his home in sentry Hill above St Eunan’s Cathedral.

The Fordson three cylinder engine had a familiar sound to it at idling speed nearly like a heartbeat, and that was the sound that this tractor made all the time as it was driven slowly by Thomas Keys heading up to Lismonaghan to the farm or on a run to the bog. 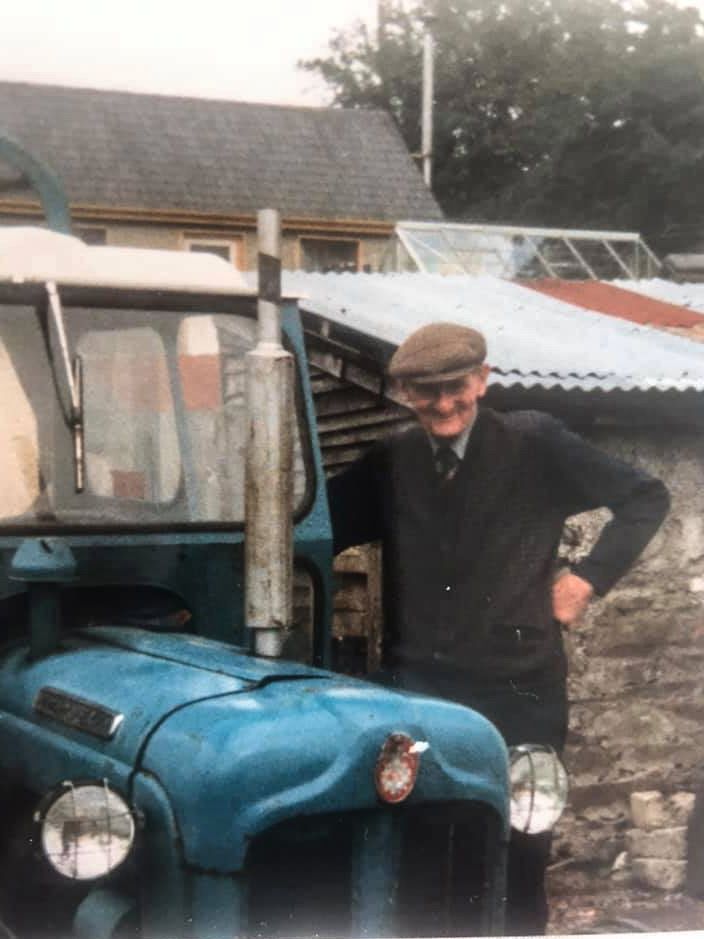 For me, many the day at school break time, when I’d rather be anywhere else than at school, I watched that wee tractor heading off from across the Cathedral car park from my viewing point at the school wall at the old boys school coming and going to Keys’ home which was a working farmhouse on the edge of Letterkenny town. The Keys were recycling long before it was fashionable, taking leftover food (known locally as brock) from the houses in the area to feed pigs and hens in their working farmhouse.

On Thursdays, the normally quiet Cathedral car park became a hive of activity with the mart and the wee blue Ford looked small when big cattle lorries and big tractors and cattle trailers and Land Rovers came to town, steam rising from them on early mornings as they queued to buy and sell Livestock. And still you would see the wee blue tractor manoeuvring its way out from the back of the house through a busy car park. This home house of the Keys’ also made teas for farmers at the Mart in Thomas’s wife Mary’s day. Students from the tech, college and Convent would also call into a small shop that Mary Keys and her family ran and in later years her son Johnny also ran.

Thomas Keys was the tall man from the view as a child that I had of him who drove the Blue Fordson Tractor with the low tractor cab, which looked like a batter space capsule.

He was a familiar sight sitting in juking out past the manual wiper that was attached to the top of the small windscreen as he headed on his way. He lived at the top of the cathedral car park where he raised his family in the former home of his wife Mary nee Doherty, a generation before that her mother whose maiden name was McGlynn lived in a family home was there before the cathedral was built, it was a small thatched cottage which can be seen in an early picture of the cathedral. 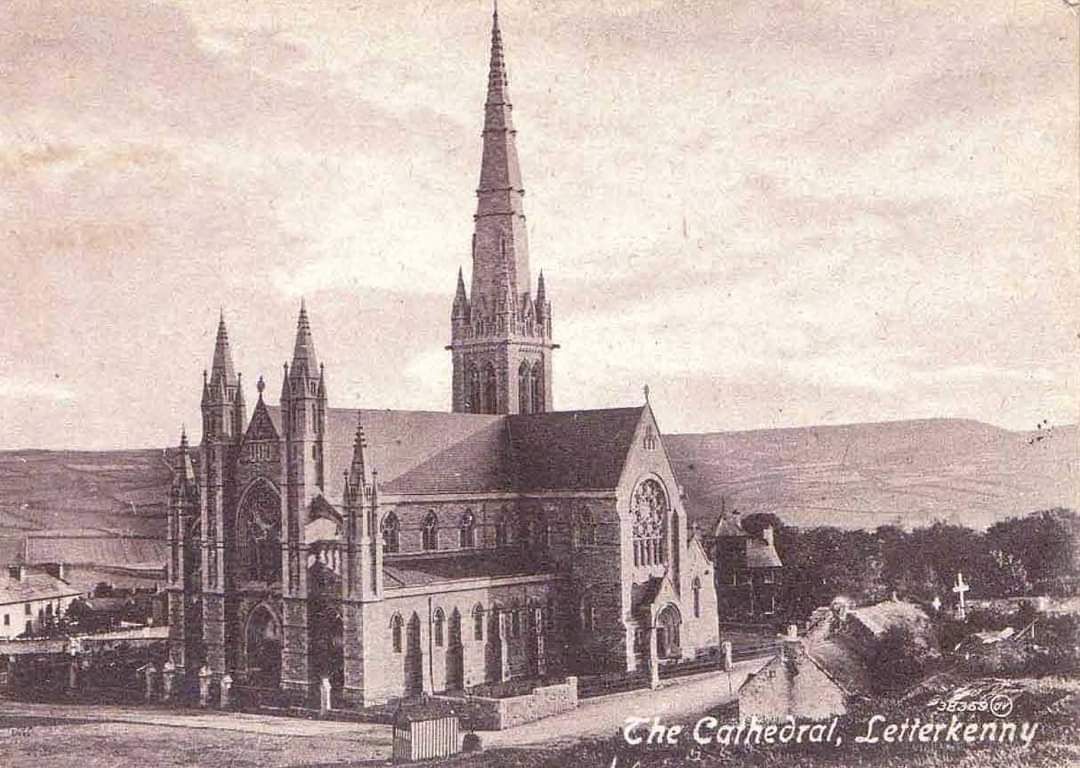 A view of the original family home, a watched cottage facing St Eunans Cathedral which belong to the Keys family on Thomas Keys wife side which was relocated to Sentry Hill in a deal by Cardinal O’Donnell.

The late Cardinal O’Donnell did a deal to relocate the family home 75 yards away from the side of the Cathedral to the top of the car park. The building material for the house was sourced from material originally purchased to build the cathedral. The house was built to fit doors from the sacristy in the chapel, finished in the same grain effect paint and windows that had already been made with rounded tops sashes. The slates were the same as the ones used in the roof of the cathedral. A slaughter house was also built at the rear to cater for Edward McGlynn who was a butcher by trade. 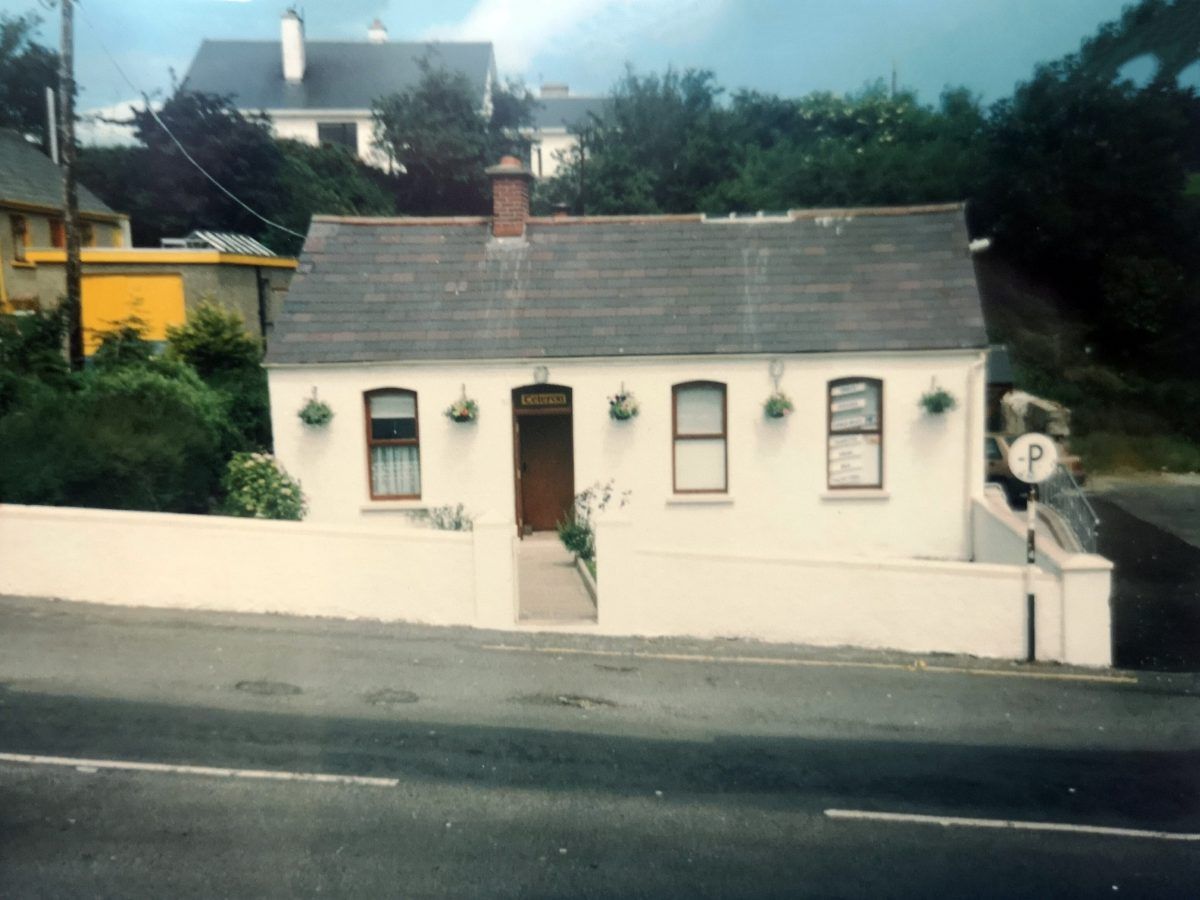 The beautiful farmhouse of Tomas Keys on Sentry Hill which was located at the top of the Cathedral car park but is now just a distant memory. Photo Brian McDaid. 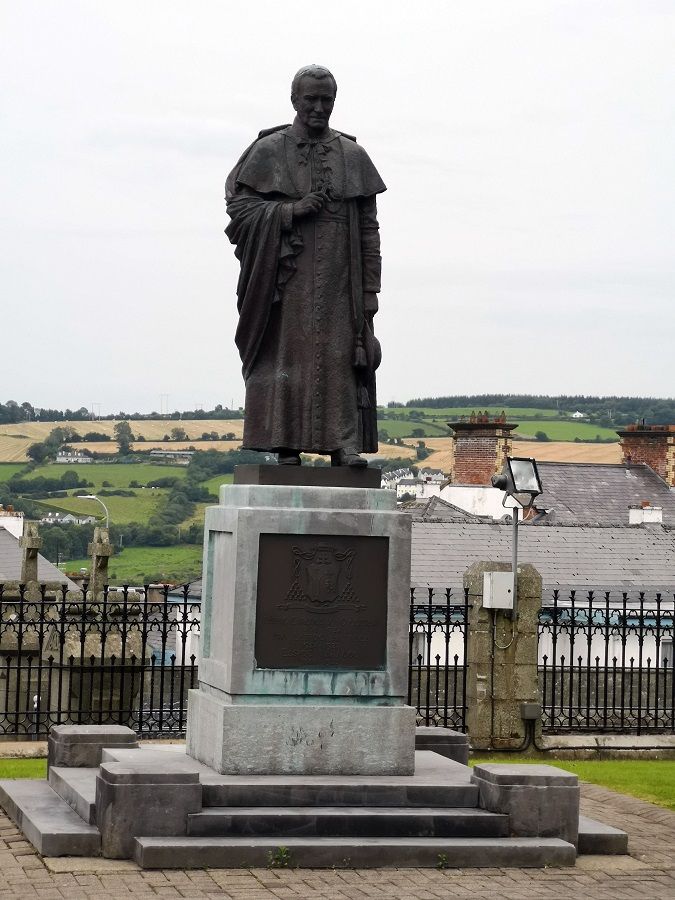 Cardinal O’Donnell who did a deal to relocate and build the house on Sentry Hill that the keys family were reared in. Photo Brian McDaid.

In 1991 Thomas Keys passed away and his wife Mary passed away not long after in the same year, Johnny, their son lived there for a further 5 years running a shop and had plans to develop the property but never got the support or planning permission it needed to get off the ground before finally leaving ‘the hill’ as it was affectionately known to the family as  the old homestead suffered a lot from vandalism in the years it was vacant as did the old Letterkenny Livestock Mart and in the following years both landmarks in Letterkenny disappeared both taking up additional car parking space.

The last link with that old Letterkenny era was Tommy Keys’ old tractor which was a sad sight suffering both the effects of rust, wear and vandalism. When Thomas Keys’ son, who originally sourced the tractor for his father from McClean and McLaughlins, decided to start the long journey of restoration.

Tommy did the mechanical work of rebuilding the three-cylinder engine in his garage workshop in Ballyraine and got the lift operational again.

The big rear wheels were the worst for wear and had to be remade from scratch, which was also done in his garage. The detailing of the tractor was then left to a specialist to bring the finish back to Ford Blue and Fordson Orange before the tractor was put in permanent dry storage in its own section of the family run garage in Ballyraine. 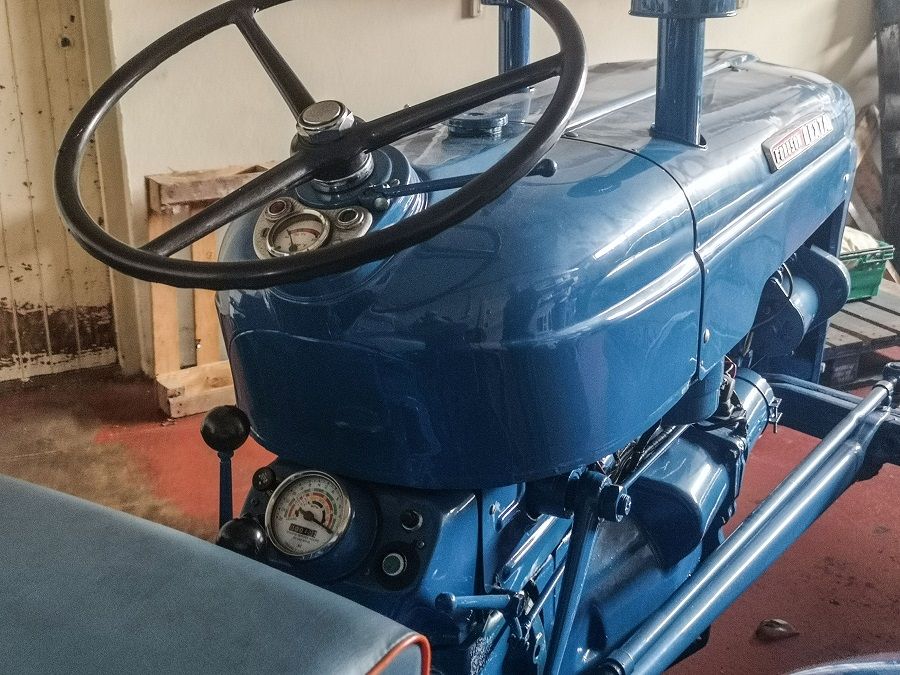 A view from behind the wheel of Thomas Keys old tractor which was lovingly restored by his sons, grans sons and great grandsons. Photo Brian McDaid.

Tommy has the tractor looking as good if not even better than the day it rolled out the local Ford Dealership in 1961 to become a familiar sight around the roads of the town. Over the years Tommy’s father had a few comforts fitted to the tractor like better headlight units which were relocated higher at the front of the tractor.

A few different tractor cab was also fitted which was a bit of a luxury in them days Even the old grills were missing on Tommys old tractor when he would drive around so slowly as I remembered him in the 1970s as a boy driving along the road when I was reluctantly going to school,

The only thing Tommy needs to fit now to his father’s tractor is a roll bar as a safety requirement.

This week Tommy keys stepped around his father’s tractor, moving stuff to let light show this fine example of Letterkenny history. His son, also called Thomas, landed in to have a yarn. 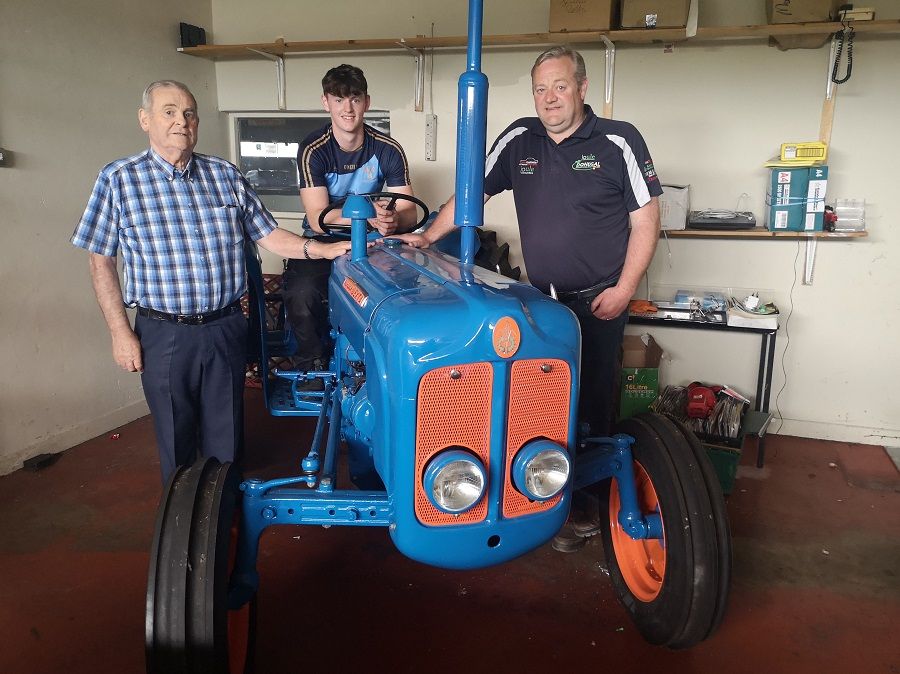 Three generation of the Keys Family from Sentry Hill all called Thomas pictured with Thomas Keys Old fords Tractor which has been restored to what it looked like new in 1961. Photo Brian McDaid.

‘Get the two of you in there for a photo with the tractor’ I suggested, ‘hold on there’s another Thomas Keys here too’ was the reply , a great grandson of Thomas Keys who joined the two generations for a photo.

Wee Thomas as they call him, the great grandson ends up taller than both his father Thomas and his grandfather Tommy,

The thought crossed my mind looking through the lens wasn’t Fordson a beautiful name for a tractor that stood the test of time, longer than the history it created around the Cathedral car park as the wee blue Dexta sitting proudly with all the generations of Keys around it. 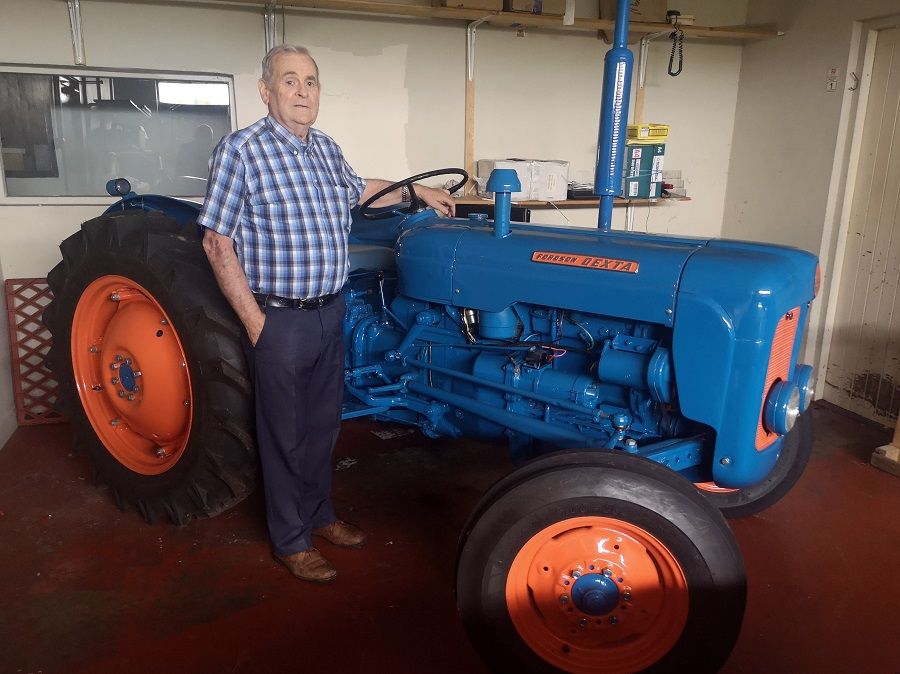 Tommy Keys with his father’s tractor which he refurbished to its original state pictured at his garage in Ballyraine. Photo Brian McDaid.

Big thanks to the Keys family for all the help in putting this together, including Janine McDaid, a granddaughter, Johnny Keys, Monica Murphy, and Theresa Gorman, sons and daughters and Tony Gorman, and not forgetting Thomas Keys, Thomas Keys and Thomas Keys, the three generations of Keys family proudly carrying the name Thomas on in an ever changing Letterkenny.