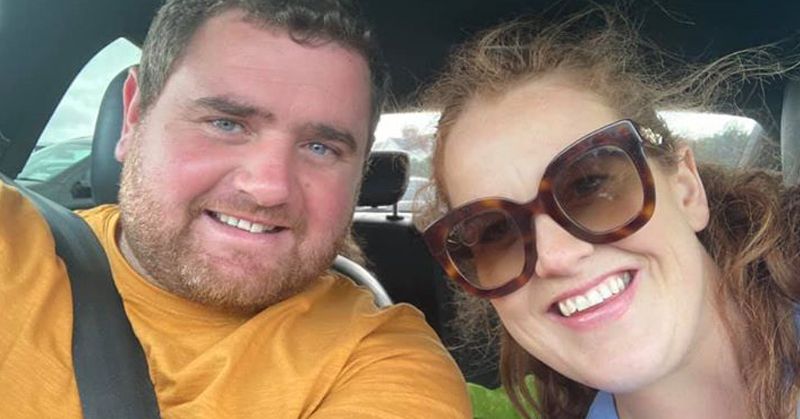 A Donegal couple has been praised for doing a kind act – with a little bit of humour!

Carron and Brendan Boyle were visiting the Giants Causeway last week when they came across a lost phone in a car park. They did the decent thing and handed it into the car park operators, but not before taking a quick selfie for the owner.

The woman who lost the phone was Avril Ní Fhlaithaimh, who had been on a day out with her family when she accidentally left her phone on the roof of her car. It was only after she drove down the road that she realised it was gone – along with all the bank cards in her phone case.

Avril shared her experience on Facebook: “We pulled into the next stop and frantically started calling the visitors centre and my phone. We started to think about cancelling all my cards.

“After the third call to my phone a lovely girl from the car park answered and said my phone and cards had all been handed in to them. I cried with relief and we turned around to collect it immediately.”

Avril made a funny discovery when she got her phone back and looked through her photos of the Causeway. Carron and Brendan’s selfie appeared as a surprise addition to the photo gallery.

“The only explanation is that they are the heroes that found my phone, took this hilarious picture and handed it in, cards and all,” Avril wrote.

That photo sparked an online search to find and thank the ‘legends’ in the photo. The Facebook appeal went viral and reached the Boyles in just a few days.

Carron told Donegal Daily: “I couldn’t believe it when my husband Brendan woke me at 6am to say have a look at Facebook. I never in a million years thought the person would find us. I got a shock to be honest. It is crazy how social media can work.”

Expressing her delight that Avril got her phone back, Carron said the selfie was “just for a laugh” so the owner would know who found it.

The Giant’s Causeway in Antrim

The couple’s good deed is now being returned, thanks to a kind-hearted suggestion from Avril. She wanted to repay them by donating to their charity of choice and has set up a Facebook donate page for others to do the same.

Carron and Brendan were happy to choose Alzheimer’s Ireland to benefit from the donations, as it is a cause close to their family.

“It was very nice of Avril to think of this and we didn’t want to put any pressure on her to donate. She was more than happy and said that it has brightened up her 2020 with everything that is going on in the world,” said Carron.