Tigers bite in second half to leave Milford in the mire

IT TOOK some time for them to break the deadlock, but Kildrum Tigers eventually ran out comfortable winners against relegation-threatened Milford United last night.

It wasn’t until the 56th minute that Toland opened the scoring for the dominant Tigers, who just couldn’t force a breakthrough in the opening half.

Noel Gillespie’s Milford, on the back of a heavy loss against Cappry Rovers at the weekend, defended stoutly until that moment, 11 minutes into the second half, when Toland slotted home.

Toland combined with the evergreen Kevin McHugh for the goal. McHugh unselfishly squared back to Toland, who initially fed him in the penalty area, and the young midfielder tucked past Caolan McGettigan.

It had been coming, you felt, in the opening 45 minutes.

Just five minutes in, McHugh won a free kick on the edge of the D and the ex-Finn Harps hit man cracked the dead ball attempt against the post.

McGettigan held a stinging attempt by McHugh from distance before the Milford number 1 denied the rampaging Barry O’Donnell, who had combined with McHugh for a chance.

McGettigan saved from Toland and Gary Crossan while Conor Crossan and McHugh had efforts blocked down as the Tigers laid siege.

Toland eventually found a way to put Kildrum in front. Matthew Crossan drilled a first-time effort just wide soon after as Kildrum turned the screw while Higgins prodded win when one-on-one with the ‘keeper.

Gary Crossan did have the ball in the net, but the celebrations were cut short by an offside call against the former Harps winger.

Kildrum were reduced to ten men 18 minutes from the end when Jamie McKinney, who had been having a fine evening at the heart of the visitors’ rearguard, was shown his marching orders for a foul on Brandon Wilkie.

The crime itself was questionable but the punishment could certainly be deemed as excessive.

Kildrum momentarily wobbled and sub Ryan Flood headed off the top of the crossbar with a reminder from the home side.

Higgins, however, made the win save when he got on the end of Toland’s pass and applied a neat finish.

Milford remain entangled in the relegation mire ahead of a huge tussle with Drumkeen United on Sunday while Kildrum’s hopes of landing the title are remote in spite of the win. 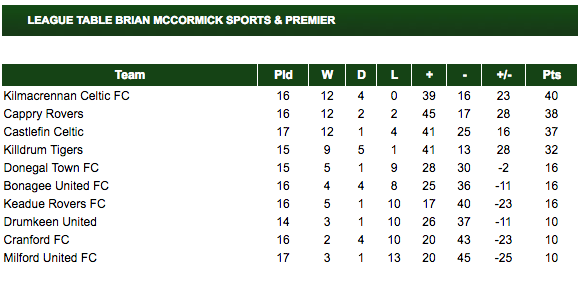