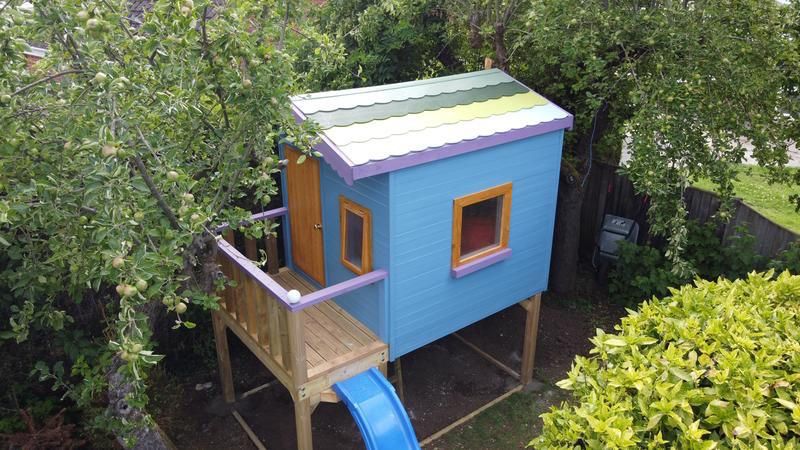 A life-size playhouse based on a miniature doll’s house made by a Donegal company has become a huge hit on Airbnb.

The house, based on a treehouse built by Letterkenny’s Lottie Dolls, was listed on the home rentals site as a joke has been booked by a family of four for a weekend break.

The 8ft (2.4m) by 6ft (1.8m) house was built by Jason Kneen in his garden in Ludgershall, Wiltshire, England in lockdown.

The “unique stay” was listed on Airbnb at £500 a night, as the family “didn’t want anyone” to actually book it.

Mr Kneen said: “I thought the booking was a joke at first but the fact someone’s going to do it is pretty incredible.”

The treehouse has even been wired for electricity, Siri and Alexa

Mr Kneen said the £3,500 playhouse was a full-size recreation of Lottie’s Wooden Doll Treehouse – one the favourite toys of his children Leo, Poppy, Ixia, Rosie and Zebedee.

Marketed as a full-sized version of the toy treehouse, it is described on Airbnb as a “romantic getaway or an adventure with the kids”.

It sleeps four, boasts a balcony, slide, ladder and trapdoor and has wifi access.

“Lavatory facilities” are available in the neighbouring Tardis – a replica of Doctor Who’s time-traveling machine.

A toilet is available in the neighbouring Tardis

“The price was only really picked because we weren’t expecting anybody to actually do it,” said Mr Kneen.

“I thought it would be interesting to put it up there with some photos and last weekend, we suddenly got an inquiry through.”

With their first visitors booked for a night on Saturday, he said it was “going to be an interesting experience”.
Image caption

Mr Kneen said the £3,5000 playhouse is a full-size recreation of one his children’s favourite toys, Lottie’s Wooden Doll Treehouse

“It’s two adults and two kids, the husband said the children hadn’t stopped going on about it since they spotted it,” he said.

“I think it’s amazing and insane, I’m not sure I would pay that much for my kids to stay in one but the fact that someone’s going to do it is pretty incredible.

“So we’re geared up to make the place all look good and nice and make it a good experience.”

Ian Harkin, the Donegal businessman behind Lottie Dolls, told Donegal Daily that he was just as surprised by the lengths Jason had gone to in building the life-sized LOttie treehouse.

“One of the things we try to do with Lottie is to inspire imagination and creativity, little did we know that 46-year-old Jason heard our message.

“We think he deserves ‘Dad of the Year’ for building a replica Lottie Treehouse in his back garden, next to his Dr Who Tardis toilet. Jason was telling me he put it up on Airbnb for a laugh at a high price to put people off, little did he expect he has his first customer coming tomorrow night.

“In Lottie, we try not to focus on domesticated activities or what career you might wish to aim for but instead having fun in childhood and that’s why we chose a treehouse over a doll house. The house comes with a slide, swings, trapdoor etc all of which have been replicated in Jason’s full-sized version,” he said.