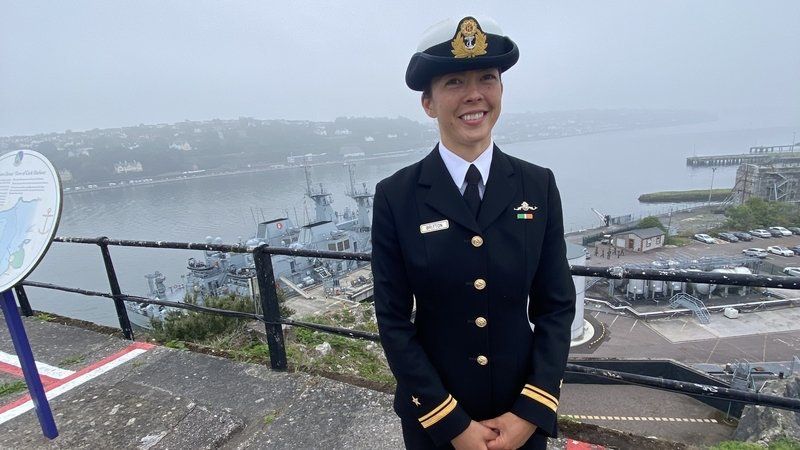 A Donegal woman has made naval history when she became the Irish Navy’s first female diver.

The honour was bestowed on Sub-Lieutenant Tahlia Britton (pictured by RTE) from Rossnowlagh at a ceremony in Cork yesterday.

She and two others, Able Mechanic Rob Mulqueen from Limerick and Able Seaman Emmet O’Hanlon from Cork, received their diving log books in a ceremony at the naval base in Haulbowline yesterday afternoon.

The course has a 70% drop-out rate and the new divers were the only ones of the original 10 to finish this course.

Established in the 1960s, the diving service is an elite unit of the naval service with up to 30 divers.

The unit is responsible for search and recovery, underwater engineering and explosive ordnance disposal.

The three Navy members, unexpectedly but much to their delight, received their prized diving badges on Bere Island following a traditional three-kilometre run to a look-out point on the west Cork island.

Tahlia, 29, said while she is proud to be the Navy’s first female diver, she is prouder still of finishing the course alongside her two colleagues.

Always a keen watersports person, Tahlia knew she wanted to join the military but at her parents’ urging completed a degree at NUIG in Podiatry before joining the Navy in 2014.

She is the current Gunnery Officer on LÉ James Joyce.

From 2004 to 2012 she competed with the Irish surfing team at a number of European championships and also travelled to Ecuador, Costa Rica, and Portugal for world championships.

“I’ve a very competitive nature and I wanted a challenge,” she said about the diving course, which was interrupted by the Covid-19 lockdown.

Normally her training would be conducted during the winter months, so divers experience the coldest sea conditions to test their endurance.

Tahlia, who joined the Naval Service six years ago, completed 100 hours of dives up to 38m deep.

It is expected that Tahlia will be sent on a mine-clearance course to Canada.

Her ambition is to one day become a ship’s captain.