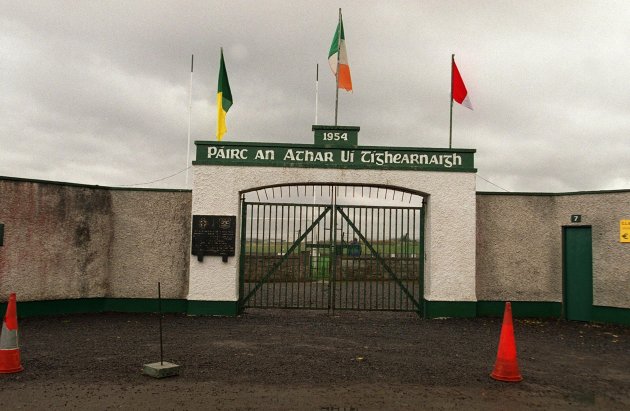 Cloughaneely make most of purple patches to topple Aodh Ruadh

IN A game where both sides had their purple patches, it was Cloughaneey who made the most of theirs for a vital IFC win at Aodh Ruadh.

In the final analysis, the departures of Sean Taylor and David Dolan through injury cost Aodh Ruadh dear.

The visitors started like a tornado drilling a lot of quality ball into an Aodh Ruadh defence which had decided to go man for man. It reaped early rewards when Darren McGeever converted a penalty two minutes in to thrust his side into the lead.

Cloughaneely added two quick points, but a Philip Patton penalty up the other end helped tilt the balance of exchanges in the Ernesiders favour.

Aodh Ruadh started to find openings in the Blues’ rearguard and Johnny Gethins exploited those to the maximum to drive home two quality goals as well as adding a point. That salvo helped Aodh Ruadh to a 3-4 to 1-4 interval advantage.

Michael Fitzgerald netted for shortly after the restart, but Aodh Ruadh continuted to play the better football and by the second water break they lead by four points. Indeed that advantage was extended to five with a Philip Patton free after the break, but then the Gaeltacht men hit an unanswered 1-4, Paul Sweeney with the goal, to propel themselves into what had looked an unlikely lead just ten minutes earlier. Aodh Ruadh tried desperately to claw back the deficit, but by this stage time was their enemy and Cloughaneely saw out what was a hard earned victory.

Cloughaneely got the perfect start when they were awarded a penalty after Sean Taylor pulled across Paul Sweeney. Darren McGeever made no mistake from the spot, slamming his shot to Peter Boyle’s right.

Aodh Ruadh weren’t long in responding, Philip Patton slipping over after a foul on Nathan Boyle on five minutes.

A couple of minutes later the game’s first score from play arrived, John Fitzgerald screwing over well under pressure.

On nine minutes Fitzgerald was on the mark again. This time he had a sniff of goal, but he had to switch back on to his right foot and be content with a point.

A minute later the game had it’s second penalty, Philip Patton being fouled before stepping up to slot neatly to the Sean McClafferty’s right to put a point between them.

Things got dramatically better for Ballyshannon right after that. Cloughaneely lost the ball on the way out of their defence and possession was fed to Johnny Gethins who hared at Sean McClafferty from the right and managed to squeeze his finish to the net from an acute angle.

Just before the water break John Fitzgerald was fouled as he headed for the posts and Sean Curran tapped over from close in to leave the minimum between them.

Aodh Ruadh’s cause then took a blow with the departure of David Dolan with what looked like a nasty calf injury.

They responded well though with Diarmaid McInerney floating over a lovely right foot finish. Then Johnny Gallagher dropped a divine fist past in front of Johnny Gethins and the Finner man made no mistake when one-on-one with the keeper with a cool, low finish on 26 minutes.

Cloughaneely got back up and running with a John Fitzgerald free a minute before the break.

In first half added time Nathan Boyle was fouled for a free which Philip Patton fired over from the 13 metre line. The hosts then turned over the kick out and that man Johnny Gethins again found himself racing in on goal, but this time he elected to fist over.

The goals continued to flow in the second half and just three minutes in Cloughaneely cut through the Aodh Ruadh defence with ominous ease and Michael Fitzgerald had the easy job of palming to the net.

Shane McGrath and Sean Curran exchanged points in the 36th minute as these two evenly matched sides continued to trade blow for blow.

On 38 minutes the gap between the sides was down to two points after a Curran free when Greg McGroary noticed something untoward as Colm Kelly came out to collect the ball.

Darren Drummond finally cancelled that out on 41 minutes after Aodh Ruadh had spurned a couple of decent scoring chances.

Just before the water break Nathan Boyle was fouled for a free which Philip Patton slipped over from the edge of the penalty area to make it advantage Aodh Ruadh heading into the final quarter.

The margin was stretched out to five points not long after the resumption with another Patton free, but Martin Maguire came back with a dead ball up the other end after some sloppy Aodh Ruadh tackling.

Cloughaneely then came with a scoring spurt which took them back level with the hosts by the 55th minute. First Maguire lofted over a glorious shot before Cian Doogan split the posts well and Paul Sweeney fired over. Then goalkeeper Sean McClafferty stepped up to sweep over a levelling 45 to big roars from the travelling support.

Then on 57 minutes it was disaster for Aodh Ruadh. Again the visitors cut through the Ballyshannon defence with too much ease. Paul Sweeney got off a shot, only to be denied by a great save by Peter Boyle. However Sweeney pounced quickest on the loose ball to palm to the net.

With a minute of normal time remaining Philip Patton made it a two point game with a free, but another Cian Doogan score left Aodh Ruadh looking for a goal with time very much against them. Michael McKenna did send over from play, but the Ernesiders were unable to fashion a winner before Greg McGroary’s long whistle.