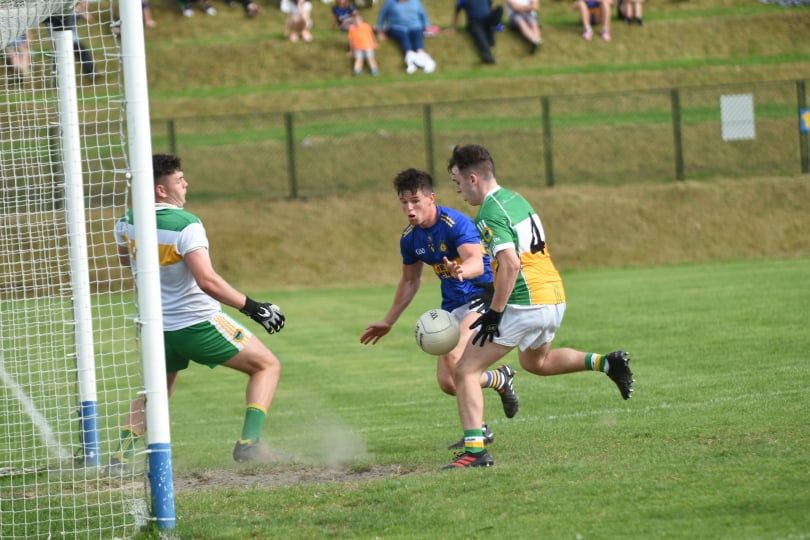 Kilcar and Glenswilly have had plenty of duels in recent years and in Towney this afternoon the balance of power stayed with the team from the south-west.

Goals inside of the first quarter from Mark McHugh and then Patrick McBrearty meant Kilcar wouldn’t miss out in the current sequence of favourites winning and winning big. Conor Doherty added another before half-time.

Matthew McClean bundled home a fourth and it means that Kilcar scored 8-45 in two home championship outings. Today they scored 4-21 from play, the same total they mustered all in against Termon two weeks ago.

It all means that Kilcar are unlikely to be caught for a top eight place and next weekend will want to win away from home to guarantee they’ll be making the tea and sandwiches in Towney. For Glenswilly, they might well need snookers next Sunday.

Michael Murphy almost got in for goal as early as the third minute when he was forced wide by Barry McGinley but still managed to get the shot on target, only for Kevin Campbell to save with his legs.

By the 10th minute, a point from Mark McHugh had edged John McNulty’s team into a 0-4 to 0-3 lead, with Murphy having scored a 45 and a free for the visitors.

The first goal came 13 minutes and although Mark McHugh was the one who finished the move, it was a pass from distance from Stephen McBrearty that broke Glenswilly. Inside, Matthew McClean marked the ball and opted to instantly square to another mark – or Mark – who had the simple task of slapping time.

Two minutes later, there was a second goal for the hosts. This time Kevin Campbell, the Kilcar goalkeeper, was the one who picked his man from a long ball. Stephen McBrearty got in and drilled a shot low that bat Cian Randles in the Glenswilly goal, only for Shaun Gallagher to clear off the line. However, Patrick McBrearty was first to the loose change and drove the ball into the unguarded net.

With a more youthful side, Glenswilly looked like they might wilt, especially with Kilcar adding three points to their streak to move 2-7 to 0-4 in front.

A goal on 22 minutes from the impressive Kealan Dunleavy did give something to cling their hopes on. Dunleavy drove low past Campbell after approach play from Murphy and Conor McGinty. That made their deficit six – 2-8 to 1-5.

Kilcar, four minutes later, put together a flowing move that involved fleet of foot and fisted passes. Conor Doherty was the one on the end of the move, slapping home a pass from Ryan McHugh. In fact, it was the type of goal that McHugh has scored many times before. At the break it was 3-9 to 1-5.

Caoimhinn Marley and Oisin Carr opened the second half scoring, although Kilcar restored their 10-point advantage with Dara O’Donnell and Ryan McHugh replying.

Substitute O’Donnell went on a run in the 41st minute and looking up, spotted Matthew McClean inside, whose punch ended up in the net, perhaps even via Shane McDaid. Kilcar were cruising, 4-15 to 1-8 up by the time of the second half water break in the sunshine.

Cian Randles in the Glenswilly goal stopped O’Donnell from grabbing a fifth goal 10 minutes from time as Patrick McBrearty took the first of four successive marks. Ryan McShane popped over his first scores in SFC football late on, whilst Conor McShane, at the other end of the scale it’s fair to say, also got in on the act.