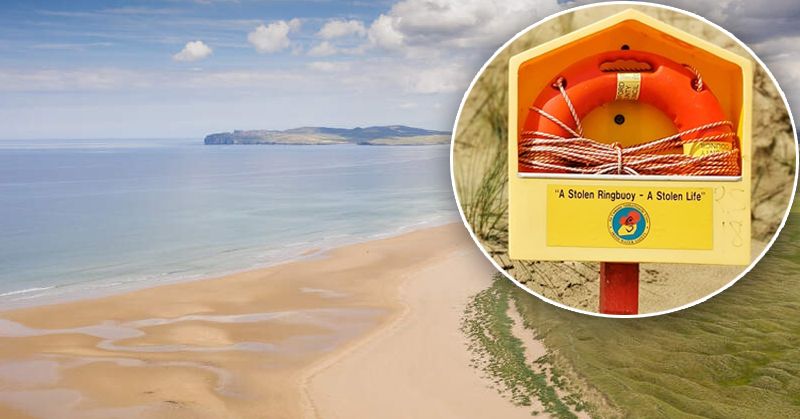 Mother and son saved from treacherous current at Donegal beach

A mother and son were saved from a body-boarding incident thanks to fast-acting members of the public.

The incident occurred yesterday at Drumnatinny beach in Falcarragh, when beachgoers heard screams for help from the water.

A woman and her young teenage son were being swept out to sea on their paddleboards after getting caught in a current.

Mark Dodson was one of the people who rushed to help. The Wicklow man is holidaying in Donegal with his family and was at the beach with his children and parents at the time.

“You could hear the terror in the screams. I was just one of the people who ran towards the water. By the time I got there a man had gone out on his board and a young girl, you could see she could swim properly, had gone out as well. But the waves were high and we were losing sight of the woman and boy,” Mark told Donegal Daily.

“About 20-30 people were standing in the water looking out.”

A fortunate sequence of actions combined to bring the woman and boy to shore:

One person ran for the beach life buoy and gave it to Mark, who edged out on foot as far as possible. The young girl had to swam back, as she was exhausted. The man on the board got the mother and son on a board and brought them close enough to Mark. He got a hand on the board, but lost his grip in the waves. With another attempt, Mark got the man’s arm and a chain of people pulled Mark and everybody into land.

Paramedics were waiting at the beach by the time the woman and child were saved.

Mark Dodson was checked by paramedics after the incident

“It was a combination of events, they were very lucky. It’s a good story but you have to take something from this and make some sort of change,” Mark said.

Warning signs for dangerous currents should be placed at Falcarragh beach to prevent any other incidents or tragedies, he said.

“We couldn’t see any signs. There should be something to say: Danger. These currents will take you out.

“It happened so quickly. Because the woman screamed so early in terror people reacted quickly. If she left it too late, you probably wouldn’t have heard her.

Mark added: “Kids are fed up hearing ‘don’t do this’ and ‘don’t do that’, at least if you had a big sign people might heed it.”