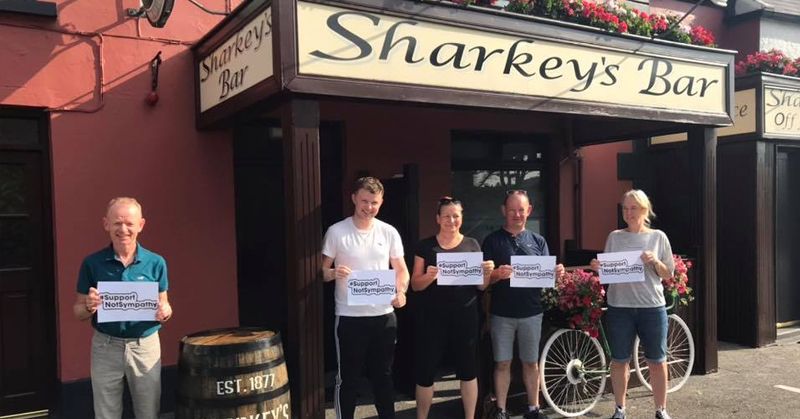 Pub owners in Donegal have been out in force calling for urgent government support after five months of closure.

Publicans took to the streets outside their premises last Saturday to join the nationwide “Support not Sympathy” campaign.

The Vintners Federation of Ireland says publicans need cash, not loans or sympathy, as they remain closed and in fear for their future.

Saturday 15th August was described as a ‘bleak date for the sector’ as it marked five months since Ireland’s 3,500 non-food pubs closed their doors.

Some well-known families and staff teams in Donegal joined the campaign and shared their images on social media. Staff from other pubs that have opened came out as a display of solidarity for their colleagues.

“These families and staff standing in front of their pubs, fearful for their future, is a powerful and symbolic image. There is so much uncertainty in the trade,” said Padraic McGann, VFI President.

The campaign’s message of #SupportNotSympathy emphasised their frustration with a government which has expressed their “sympathy “for the sector. The Vintners Federation of Ireland (VFI) and the Licensed Vintners Association (LVA) are calling for meaningful supports for those pubs that are still closed.

VFI and LVA members are calling for the introduction of a ‘Pub Support Package’ which will provide direct financial aid to pubs that are closed by order of the Government. This grant is calculated on a pro-rata weekly basis, linked to the Re-start Grant Plus scheme announced by the Government.

Ronan Lynch, LVA Chairman, says: “The human side of the shutdown gets lost in all the debate about reopening phases and economic implications.

“This campaign highlights the people behind the trade, families who have been running pubs in some cases for generations.

“These are the people who are bearing the brunt of pubs being cast aside by the Government. Ordinary people going through a period of prolonged and unnecessary uncertainty. Thousands of these family businesses won’t survive if this goes on much longer.  The Government must come to the table with meaningful supports.”