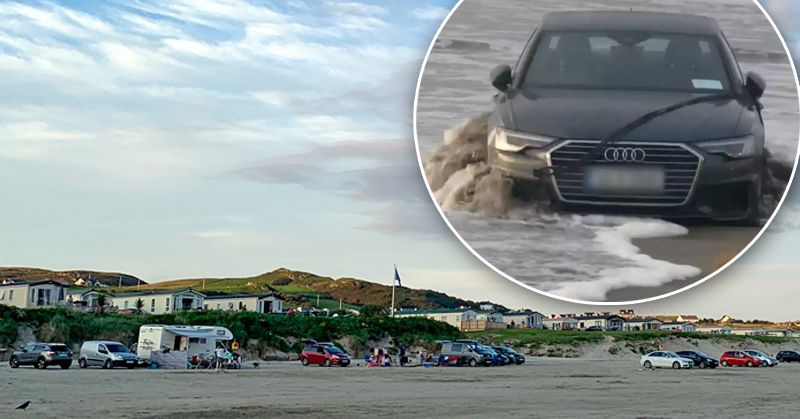 Almost 80% of Donegal Daily readers would like to see car-free beaches in the county, according to our latest Facebook poll.

Out of 9,000 votes cast last weekend, 79% of people said they would like vehicles to be banned from local beaches, while 21% would like to keep measures as they are on selected beaches.

The issue came to the fore again this week as car access to Rossnowlagh beach in south Donegal is closed for roadworks.

Donegal Daily asked readers to share their views – do they want to see vehicle access on Rossnowlagh, Downings and other beaches with car zones?

Comments on the poll raised a number of strong points.

Some readers said beaches should remain open to cars for disabled and emergency access only.

“Apart from those with disabilities and the emergency services no one should have an issue walking to a beach from a designated car park or using public transport.”

A local mother said car access is the only option for her family:

“I’ve a DISABLED daughter so those are the only beaches I can take her, tried other places before but it’s so difficult with the wheelchair, even those made up for beaches requires a suitable pathway to get to the sand, so if ever banned I hope they come up with a way to facilitate and include disabled people.”

Many commenters said extra parking should be provided at popular beaches to cater for the volume of traffic. Without parking on wide open beaches, where else is there?

“All in favour of banning cars but serious investment is needed to provide adequate parking around the beaches.”

“Cars parked on a beach are an eyesore and take away the beauty of the beach. More off-road parking needs to be addressed as these beaches have become more popular over the years and are only going to get more busy in the future and will have a detrimental effect on the environment.”

“I guess there were up to 100 cars on Downings Beach yesterday and the Beach carpark itself was full. Where else would those cars park is the question. Cars parked along the Main Street already cause traffic to move slowly and emergency services struggle to get through as it is. Scatter another 100 cars around the village and it total mayhem. There currently seems to be no real alternative really…”

Another person said they were concerned about safety:

“I’m not from Donegal and I couldn’t believe cars were allowed on the beach. Never seen it before. I think it should be stopped, it makes beaches unsafe for kids”

Those in favour of keeping car parking on beaches highlighted the benefits for families:

“No the best thing about that beach is the fact you can drive all the daily essentials right to where you perch for the day.”

“For God’s sake it’s a huge beach, better to drive to to a quiet part of it,who is going to carry all the swim gear, picnic etc up that far. Half the beach would never be used if cars were banned. More importantly the council should provide some bins!!! Zero bins in Murvagh!!!! and on a bank holiday in Rossnowlagh they arent emptied often enough.”