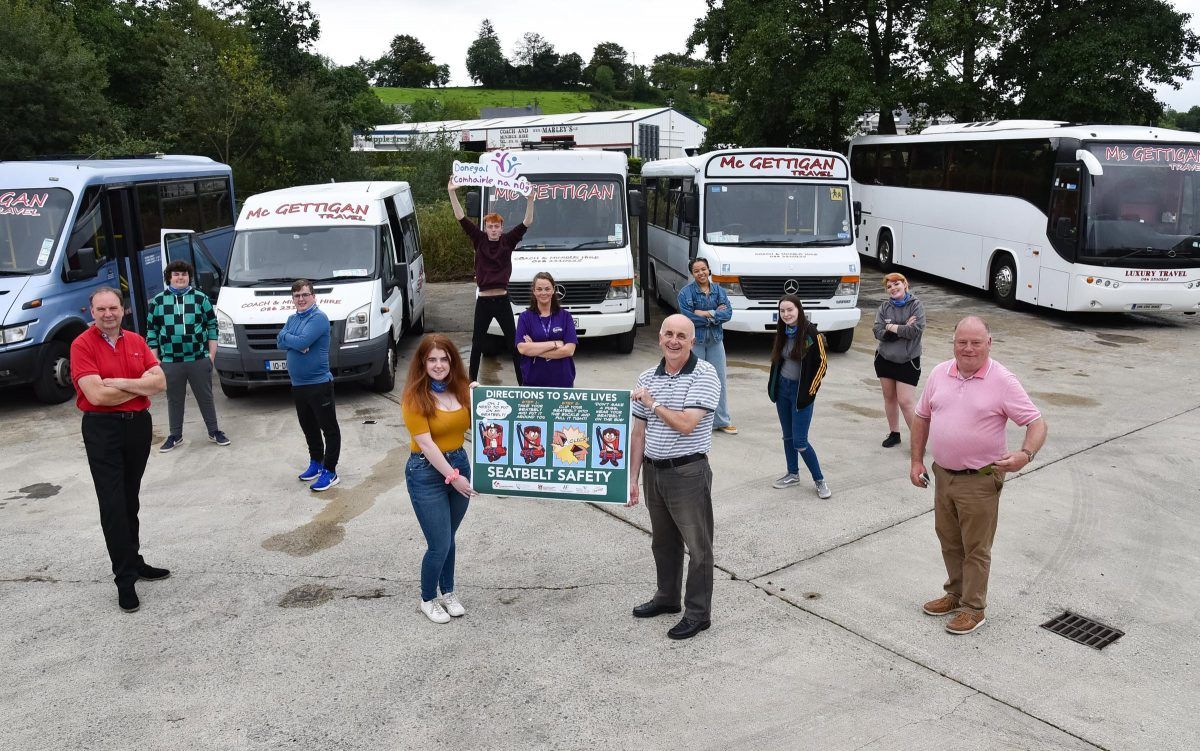 Donegal Youth Council inspiring schoolchildren to belt up on buses

The Donegal Youth Council along with the Donegal Road Safety Working Group have launched a campaign to inform students and parents on the importance of wearing seatbelts on school buses.

The young group have designed Belt Up stickers which will be displayed on school buses outlining a step by step process for school children to wear their seatbelt on buses safely and securely.

All school buses are fitted with seat belts, but it is vital to continue to encourage students to wear these at all times.  As there are multiple journeys made by school pupils by the school transport system annually, safety should remain the absolute priority for all bus companies.

The Donegal Youth Council have combined their efforts to make sure the safety messages are displayed in a manner that is easy for everyone, of all ages, travelling on buses to understand. A number of local bus companies have offered to display the belt up stickers and a pilot scheme has been launched as schools get ready to return with McGettigan Travel, Letterkenny.

Brian O’Donnell, Road Safety Officer said: “This campaign is not just about school children. It is vital that parents, guardians and teachers get on board to highlight the importance of road safety. They play a major role in conveying the message that it is normal to reach for your seat belt once you get on the bus. The seatbelt initiative that is being launched will give an important reinforcement of the messages that parents provide to their children, about wearing seat belts. Together schools and parents will make wearing seatbelts a normal part of travelling for children, and will establish lifelong safety routines.

“The Youth Council is an enthusiastic and dedicated group of young people who have worked closely with us during their term to ensure their views on road safety are taken on board. It was a privilege to be able to work with them and I would like to wish them well for the future.”

Shauna Hoey, Foroige and Donegal Youth Council co-ordinator said: “I am delighted to be involved in launching the campaign. The safety of our school children is obviously extremely important and I believe this initiative is a great way to get the message to ‘belt-up’ across to students and it was a pleasure working with members of the Youth Council as they developed this idea.”

The Donegal Youth Council are due to finish off their two year term in the coming weeks.

During their term the Donegal Youth Council have worked closely with the Donegal Road Safety Working Group to promote road safety and have been involved in scripting and recording road safety adverts which have aired on Highland Radio, focusing on speed, the use of mobile phones when driving, planning a safe way home, and driving while under the influence of drugs – the first radio advert of its kind in Ireland.

The Youth Council have also played a significant role in the “Live to Play Campaign” in association with the Road Safety Working Group and Ulster GAA; the promotion of the annual Road Safety Road Show for Post Primary Schools in Donegal; the “Keep the Race in its Place Campaign” for the Donegal Rally.

The Donegal Youth Council is supported by Donegal County Council, the Health Service Executive and the Department of Children & Youth Affairs. It is delivered locally by Foroige.