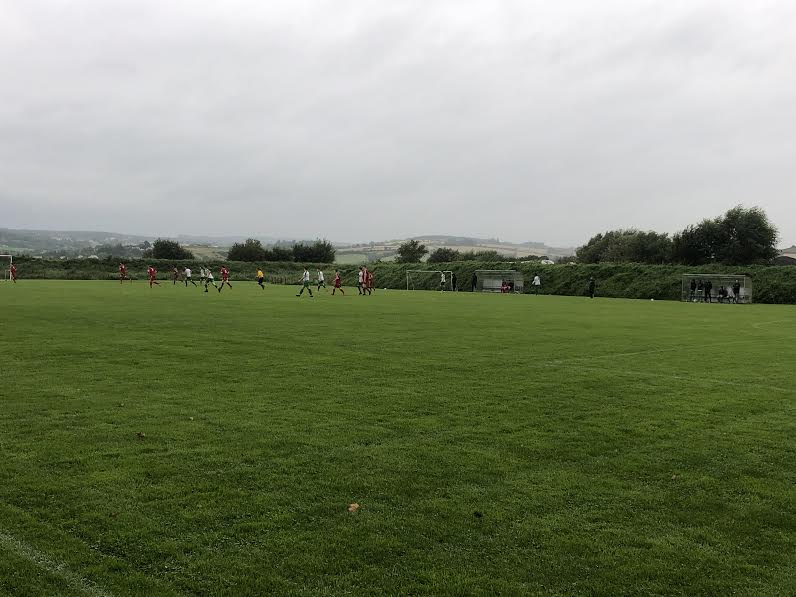 THE GATES were shut, save for essential club personnel and a media reporter, as Bonagee United defeated Swilly Rovers in a high-scoring Donegal Youth League game at Goose Green.

By Chris McNulty at Goose Green

There were eight second-half goals as Bonagee claimed the win.

Swilly, though, were kept in the game by Conor Doohan’s brace, but Coll’s sixth goal secured the win for the home side.

It was a peculiar sort of a surrounding with no spectators permitted, although a couple of Swilly supporters peered over the perimeter fence from next door. Bonagee United committee member Carolyn Maguire was on duty at the gate to ensure the government’s latest ‘behind closed doors’ order was observed and even club personnel were kept to a minimum.

Swilly took the lead when Doohan beat the offside trap in the third minute to beat home goalkeeper Gavin Forde.

Bonagee levelled when McGettigan latched onto a breaking ball to riffle to the net,

Bonagee had the better of the first half with Jack Murphy and McGettigan going close.

Luke Doherty brilliantly teed up Jack Murphy, but he drilled wide, while Burns got out well to save at the feet of Adam Murphy.

At the other end, the ever-dangerous Tyler Durning whipped a free kick wide of the target.

Bonagee hit the front a minute into the second half. Jack Murphy was the architect as his superb pass set up McGettigan. After McGettigan was denied by Burns, Aidoo pounced to convert the rebound.

Aidoo was thwarted by a superb stop by Burns, but he was powerless when McDevitt converted after the Swilly ‘keeper parried Adam Murphy’s shot.

When McGettigan made it 4-1, the home team looked home and hosed, but Doohan’s second of the night, with half-an-hour to go, made a sweat.

Alcorn powered home a header to make it 5-2 on 65 minutes, but back came Swilly and Oisin Coyle, who was only just on as a sub, reduced the arrears further while Durning himself was on target as Swilly set about flipping the deficit completely.

A magnificent block by Jay Maguire, who was steady for Bonagee throughout, prevented Doohan from chancing a hat-trick.

With the light fading fast, Coll found the bottom corner and Bonagee could breathe easy again.