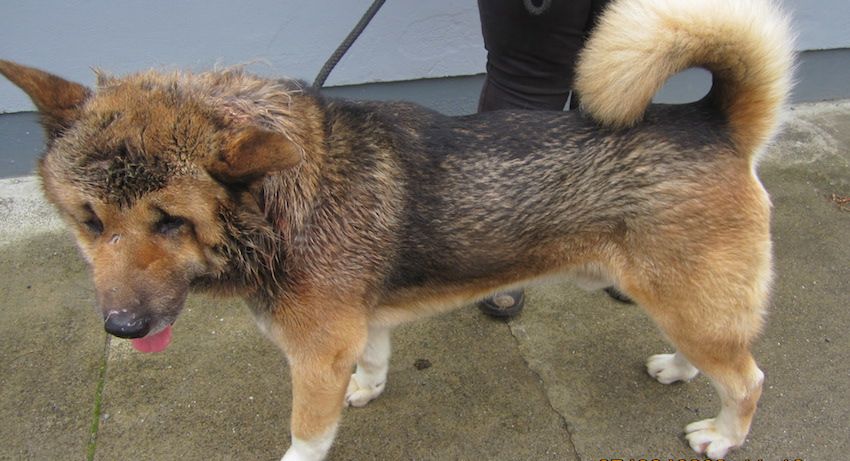 ISPCA search for owner of dog found with horrific wounds

The ISPCA in Donegal are searching for the owner of a dog which was found in horrific conditions at the side of a road.

The expensive Akita cross dog was found by a shocked member of the public on the Coravaddy to Drumkeen road outside Letterkenny on August 6th last.

The dog had horrific injuries to its neck and face.

ISPCA officers said they suspect the dog suffered for a number of months was most likely dumped before being found.

The person who found the dog took it to Smyth’s Vets in Convoy who immediately contacted the Donegal branch of the ISPCA.

Senior ISPCA Inspector Kevin McGinley said he suspects the dog was tied up for a number of months using a “spike” collar.

Bob is now recovering well after his ordeal.

He said the dog had a very good temperament and happily jumped into his van and was comfortable around people.

He added that the person who found the dog did the right thing and encouraged anybody who finds straying dogs to bring them to the ISPCA or to their local vet.

Inspector McGinley said “It is so sad to see such a lovely dog in this state of pain and neglect.

“This injury was most likely caused as a result of the dog been restrained in a manner which caused abrasion to the neck. The extent of this injury would have been caused over a number of months.

“I could see the injury was infected and there was also an open wound in the side of the dog’s neck.

A close-up of the horrific injuries received by the dog after it was found wandering near Drumkeen.

“The ISPCA is appealing to the public who may have any information as to the origin of this dog to make contact with us in confidence.

The dog, which is a seven-year-old male and not micro-chipped, is now recovering and undergoing rehabilitation with the ISPCA and recovering well after its ordeal.

Anybody with any information on the dog, which has now been called Bob, is asked to contact the ISPCA helpline in confidence on 1890 515515.