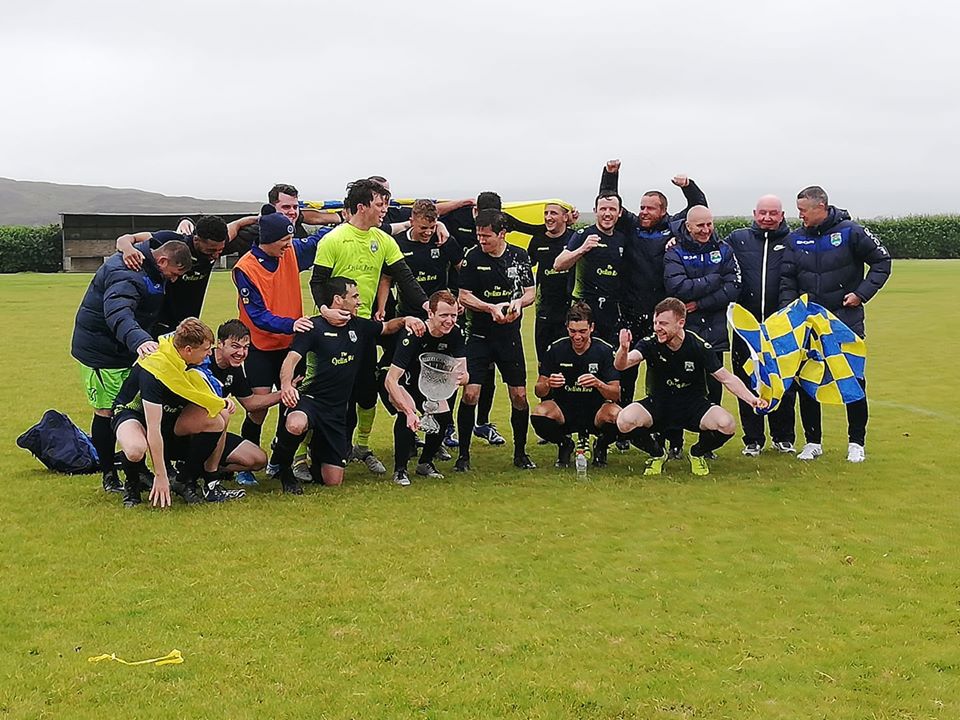 AILEACH clinched the point they needed to win their second league title at a rain soaked Crua on Sunday afternoon in an entertaining game.

Aileach started well and on 6 minutes a quick diagonal Gareth McGlynn free was headed wide by the unmarked Gavin Doherty from eight yards.

Glengad responded and a Seamus Doherty cross shot was well held by Kyle  Dougal in the visitors goal.

At the other end a Dermot Doherty ball inside the area was met by the head of the arriving Gavin Doherty but Daniel Mullarkey made a superb save to push the ball away for a corner. There was a period of defensive prominence at both ends until Matthew Byrne advanced from towards the edge of the Aileach area but dragged his effort wide.

Glengad’s best chance of the game then came on the stroke of half time. Terence Doherty broke into the left hand side of the area and played the ball back to the advancing James McKinney  who met the ball in his stride but Dougal made the save of the season to tip the ball onto the post and the danger was cleared.

It looked all over a goal but an unbelievable save by the young keeper. Glengad dominated the second half with Aileach seemingly playing a dangerous game in trying to hold on to what they had.

A short free to Byrne on the edge of the area saw his effort deflected narrowly over.

On 55 minutes a good move saw McKinney’s pass dummied by Dillon Ruddy to substitute John McDaid on the left hand side of the area but he drove across goal and wide.

Aileach went close minutes later when McGlynn released Aaron Nash on the left and from the byeline his low cross saw Dermot Doherty nip in front of Mullarkey but from his overhead kick from a very tight angle flew over.

Glengad then broke on the right hand side and a driven Conor Barrow cross deflected off a defender and onto the crossbar before being cleared.

Glengad continued to press and forced a number of corners but Cathal McElhinney and Dean Curran stood firm and Dougal made some superb catches under pressure to keep the home side out.

The last chance for the home side came on 85 minutes when after McDaid’s free from the left fell to McKinney his curling left footed goal-bound shot was headed away by McElhinney.

Aileach played out the remaining minutes and secured the point needed to clinch the league title for the first time since 2012.