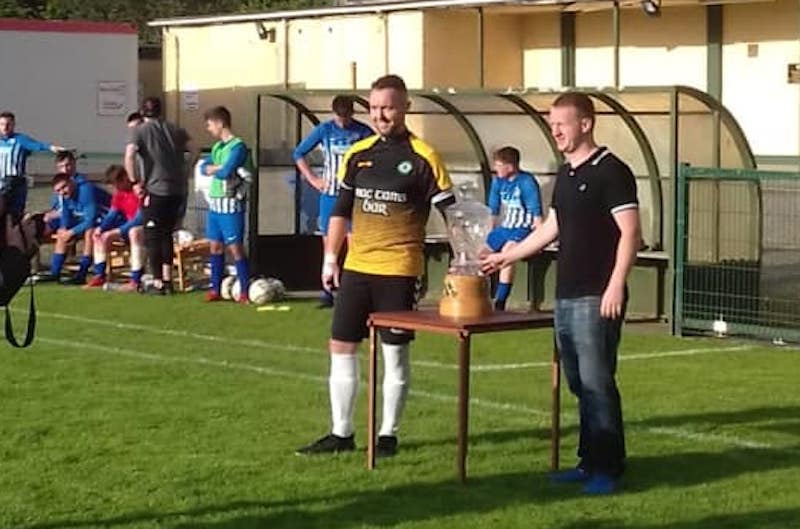 In an even opening half hour David Healy headed a Darragh McIntyre corner over the bar  before at the other end Shane McCaul controlled a Dean Harkin cross but Deaglan Bown blocked superbly.

A superb Jason Devlin cross-field ball found McCaul on the left before he cut in and saw his deflected effort turned round the post by Oisn Burke.

An in-swinging Damien Duffy free saw Jake Harkin just fail to get enough on the ball to score.

The Point replied and Healy fired a free just over before Sean McClgan s free fell to John McCloskey but from a tight angle he fired wide.

The deadlock was broken on 36 minutes after a long Gareth Bradley ball over the top found Duffy and he lifted the ball over Burke and into the net.

Minutes later Jason Devlin got in behind the defence and opted to lay the ball back but McIntyre made a vital interception.

The Point then saw Caolan McColgan turn sharply on the edge of the area but he fired over the bar.

Clonmany dealt the Point a killer blow on the stroke of half time after great work by Hession  released Harkin who advanced and unleashed a stunning 25-yards effort to the top corner giving Burke no chance.

Six minutes into the second half substitute Fionnbar Harley released Caolan Harkin on the left and his superb cross saw Patrick Harkin collide with his brother Fergal but Gareth Bradley cleared the danger.

Harley then had a snapshot deflected wide before in a quick break Devlin was denied by the advancing Burke.

The Point’s best chance came on 58 minutes after McIntyre’s superb cross from the left was  missed by Healy but fell to McCloskey at the back post but he hesitated and his effort was blocked.

Clonmany substitute Pearse McCarron made an instant impression when he beat two defenders inside the area but drilled over the bar.

Again at the other end McColgan worked an opening on the edge of the area but fired over. Clonmany all but sealed victory on 79 minutes when McCarron collected the ball on the left and played a superb lofted pass into the middle for Harkin to head the ball past the advancing Burke to make it three-nil.

The Point battled to the end and got a consolation when Harley got on the end of a Ross Nicholas free to fire home at the back post with the Clonmany defence static.

Clonmany had the final chance after  Hession stole possession high up the pitch and released McCarron but his low shot was saved by the legs of Burke.