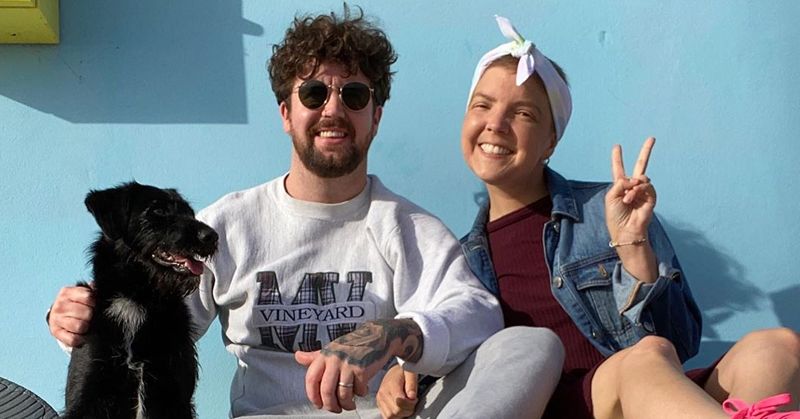 Young couple helping others as they face cancer head-on

A young Donegal man and his wife are giving the middle finger to cancer with their punchy accessories company.

Luke Skinnader (aged 28) from Ramelton and Amelia Page (31) from Essex are spreading cancer awareness and supporting young people with their ‘FVCK CANCER’ brand.

Amelia has been fighting stage 4 stomach cancer for a year and a half. At first, she was told she had only months to live, but she has beaten the odds to experience some of the best moments of her life with Luke.

It was love at first sight when the pair first met in Dubai in 2018.

“We fell head over heels for each other,” Luke tells DonegalWoman.ie

“It was that Donegal accent!” Amelia adds.

“We connected straight away, it’s bizarre because you only read about it in fairytales,” she says.

The dream romance was hit with a bombshell when Amelia became sick with severe stomach pains. Tests uncovered terminal cancer. They decided to move home to Amelia’s family in Wales as she began treatment.

“Obviously that was heartbreaking at the time,” Luke says, “but if you know Amelia she is exceptionally positive. We took it head-on, in terms of sorting treatment, moving to the UK and in that time we came up with the idea to set up our own business.”

Amelia and Luke embraced her hair loss with a quirky idea to design headwear accessories that reflected her style and personality.

After trying and failing with other bandanas, Luke came up with the idea to make their own. Out came the sketchbook and together they worked on building a business.

In the meantime, there was also an exciting matter of planning a wedding.

Luke and Amelia tied the knot last September in a beautiful ceremony at Glenveagh Castle, followed by a party at Luke’s family home in Ramelton. The wedding was remarkable in itself, as doctors didn’t think Amelia would make it so far.

“At the start they said you’ve only got a couple of months to live, that was only two years ago but I think they might have been a little bit wrong there,” she says.

Their journey hasn’t been without its setbacks. Amelia has braved over 30 rounds of chemo and pioneering treatment. Another “hiccup” came this month that has her back on chemo for six months. In spite of everything, she faces her fight with a positive outlook.

Where do all the positive vibes all come from?

Amelia says: “It’s naturally ingrained, there are so many people who do things to try and be positive. I don’t really try. Luke and my sister are amazing and I’ve got so many amazing people around me.

“I never feel like I’m on my own, we’ve got the business to focus on, I’ve been having some really good news, we get hiccups now and again. I’m just grateful for all the experiences I’ve had in life, the people I’ve met. With Luke around me, it comes easy.”

Cancer has transformed their lives, but Amelia and Luke are using their situation to help others. They have turned the FVCK CANCER online store into a community for young cancer fighters, and a portion of sales are donated to the Teens Unite Fighting Cancer in the UK.

Luke says: “During the pandemic charities have been hit quite hard, but because we’ve quite successful in the last few months we have been able to donate a much larger amount than anticipated. It helps our passion, giving back to our community and do what we love in the process. The more we grow they more we can support.”

Another rewarding element is the feel good factor their brand gives to other young people who gain confidence from the vibrant headpieces.

“We love to see people buying them in support of their friends or family. We sold one to every member of one family in Dubai, all these Emirati lads bought them after their sister was diagnosed. That was in the early days and it went on a nice trajectory after,” Luke says.

Now, their baseball caps and bandanas are being worn all over the world. The biggest support base comes from the UK and Ireland.

The Skinnaders’ links with GAA have also been a major support in Ireland and in the Middle East.

Amelia says: “I used to play GAA and they really came together as a community and supported us. They bought our bandanas, they’ve done events, wore ribbons to support us, it’s been amazing to watch how the Irish community have supported us.”

Luke adds: “While we’re here, can I give a shout out to Letterkenny Gaels?”

More exciting plans are in store for FVCK CANCER, as they team up with Converse Head Office in Boston – Amelia’s favourite brand and collaborate with Letterkenny’s Mask Your Face start-up. They are about to announce another charity partnership and a “very exciting upcoming project” soon.

Keep an eye on their social media for more updates or visit the store on  fvckcancer.co.uk