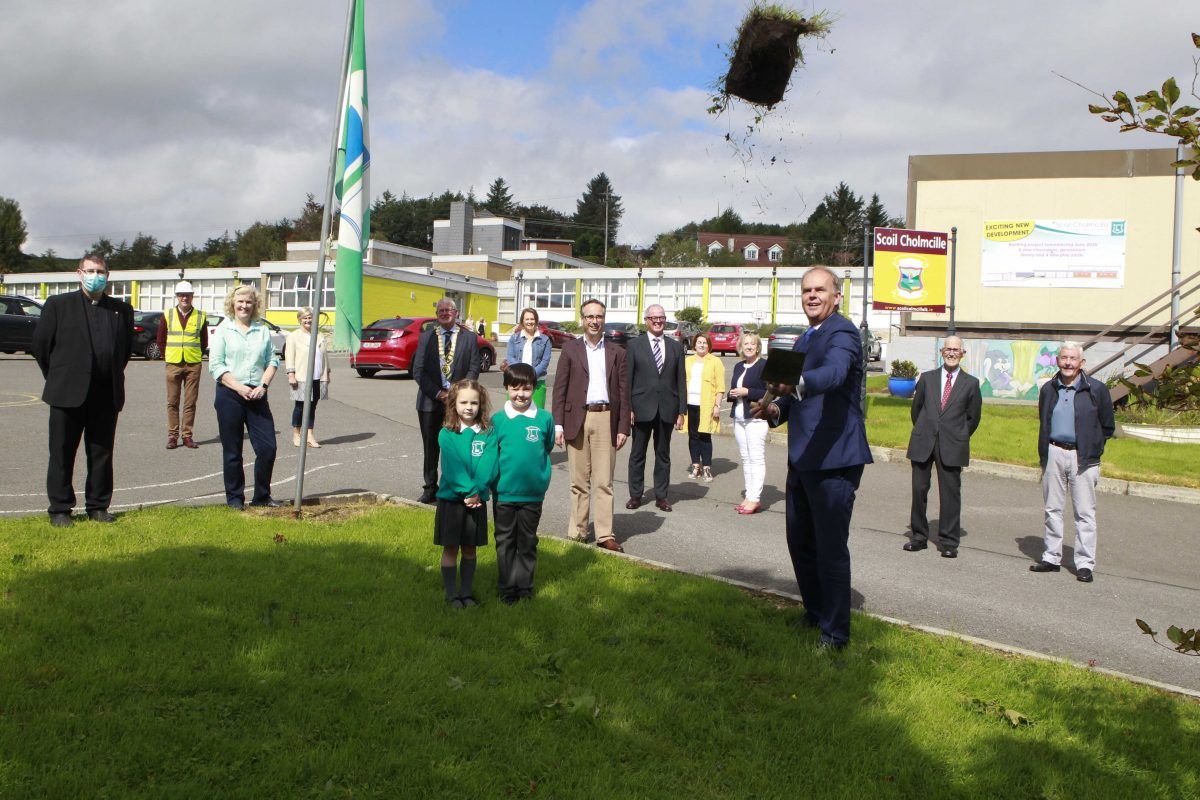 A major extension of Scoil Cholmcille was officially launched with a “groundbreaking” ceremony today.

Former Minister for Education Joe McHugh turned the sod at the site of the new buildings of the Letterkenny primary school.

Principal Paraig Cannon, staff, two students, members of the school board of management and chair of the school board Fr Philip Kemmy were joined by local representatives including Cllr Jimmy Kavanagh and Letterkenny Mayor Donal Coyle for the socially-distanced ceremony.

The turning of the sod to officially start work on the extension of Scoil Colmcille. Photo Brian McDaid.

The event marked the beginning of the large-scale construction project, however work is already well underway by Dorrian Construction.

It was a particularly momentous day for Mayor Donal Coyle, who is a former teacher at Scoil Cholmcille, and for many of the contractors who are former pupils.

Letterkenny Area Mayor Cllr. Donal Coyle and former teacher at Scoil Cholmcille pictured with Paddy Dorran (centre) with his son Harry, (Left) and brother Johnny all from Dorrian Construction – contractors for the school extension and all former pupils of the school. Photo Brian McDaid.

Investment in Scoil Cholmcille will see eight new classrooms, a gym, library and four new play yards added to the grounds. Prefabs will be removed from the school grounds and a new car park and set down area will be added in the future.

Energy efficiency will be at the heart of the project, as the school is set to be built to the highest standard to have a near zero energy rating.

Plans for the extension and refurbishment were designed by MH Associates Architects & Surveyors.

Joe McHugh TD speaking at the turning of the sod to officially start work on the extension of Scoil Colmcille.

Speaking at the event, Joe McHugh TD said: “I am delighted to be at Scoil Cholmcille this afternoon for my first ever socially distanced Covid-19 turning of the sod on their new school project.

“I am so pleased to see the works underway and I wish local contractors Dorrian Construction all the best in the months ahead.

“Scoil Cholmcille is set to get eight new classrooms, a hall, ball courts, removal of prefabs and works on the grounds.

McHugh TD added: “Comhghairdeas mór to Pauric Cannon and all the team at Scoil Cholmcille for their determination and dedication to ensuring they have reached this stage with these school works.”

The turning of the sod to officially start work on the extension of Scoil Colmcille.