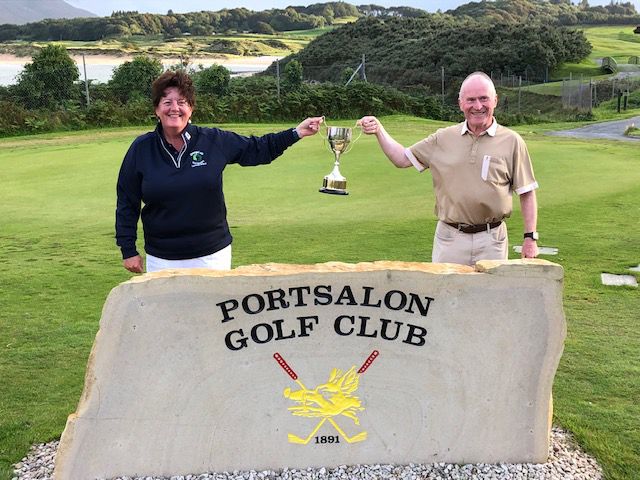 Tommy Greally is Donegal ETB Golfer of the Year

THE DONEGAL ETB Golf Society has been busy over recent weeks as it kicked back into gear after the Covid-19 lockdown.

With three outings remaining, Letterkenny GC, Cruit Island GC and our Captain’s prize at Portsalon GC, it was all to play for at the top of the rankings for this year’s Golfer of the Year prize.

A healthy turnout of 25 members were in attendance in Letterkenny GC at the end of July in monsoon like conditions. Winner on the day was Letterkenny member, Tommy Greally with a very commendable 34pts.

Two of our lady members, both also from Letterkenny Golf Club, followed close behind on 33pts with Elaine Russell pipping Kate Gallagher courtesy of a stronger back nine. With Letterkenny members occupying the top 3 slots, Ballybofey & Stranorlar members collected the remaining prizes. Rory White on 30pts b.o.t. squeezed into the last of the prize slots in 4th, our retired member’s prize went to Alex Harkin on 30pts while Eamon McDonnell won the Category 4 prize, again with 30pts.

After the round, when everyone had dried off as best they could, members gathered in the clubhouse where we were joined by our former long time CEO, Seán Ó Longáin, and his wife Eileen for a very important piece of business – the presentation of the Seán Ó Longáin Cup for our annual Team Event.

This year’s event had taken place way back before the beginning of lockdown in Greencastle Golf Club where a new name was etched onto the Cup. The Donegal ETB Head Office team – composed of Marcel McCafferty and Mr Donegal ETB Golf Society himself, Jim McGlynn ran out impressive winners by three clear strokes, with Jim carding a hugely impressive 42pts to top the individual standings on the day. Runners-up on the day were last year’s winners representing Gairmscoil Chú Uladh, Ciarán MacRuaidhrí agus Éanna Ó Mainín who just pipped one of the Finn Valley College teams comprised of husband and wife duo Mary and Alex Harkin on break of tie.

Cruit Island was next up two weeks later on a beautiful afternoon to be on the Donegal coast and the picturesque course was in magnificent shape on the day.

There was a familiar winner on the day and someone who has been known to mention once or twice about a record score he once shot around Cruit many moons ago!

Éanna Ó Mainín triumphed with 36pts at a happy hunting ground for him and posted 3 birdies including repeat birdies at the par 3, 6th and 15th.

Runner-up on the day with 33pts was Jim McGlynn with another steady showing.

Paddy McDaid took 3rd place on 32pts courtesy of a superior back nine with Tommy Greally in 4th.

The category 4 prize went to Breid Kelly on 30pts who holed a wonderful birdie on the famous 6th.

Completing the prizes was Alex Harkin who collected the retired members prize with 28pts.

Portsalon proved to be a fitting venue for our final event of the year, our Captain’s Prize hosted by Ms Deirdre O’ Toole at her home course. Going into the final round, Tommy Greally had a commanding lead over a chasing pack made up of Rory White, Jim McGlynn and Deirdre O’ Toole and, as is customary in the Society, these four were paired in the Leader’s fourball.

Also up for grabs was the annual Magnificent 7 Signature Hole trophy with Tommy Greally again at the head of affairs. With the weather proving to be very kind and the course in immaculate condition, the stage was all set for the drama to unfold. Captain Deirdre O’ Toole claimed the first of the main prizes when she holed a raker of a birdie putt on the Par 3 15th hole to claim the Magnificent 7 trophy with playing partner Tommy Greally having to settle for runner-up this year.

With all groups back in the clubhouse, the arduous task of checking the cards and collating the scores began in earnest. On the day, with a fine score of 37pts and winner of the Captain’s Prize for 2020 was Éanna Ó Mainín who continued his late season surge. Runner-up on a break of tie with 33pts was Eamonn McDonnell and Paddy McDaid also returned to the prizes in third place on a break of tie with 33pts. Fourth place went to John Bosco Gallagher, also on 33pts. Category 4 prize was won by Breid Kelly on 32pts, the retired members prize went to Alex Harkin on 31pts and the Past Captain’s Prize was won by Rory White with 31pts.

Rounding off the presentations, Deirdre presented her Captain’s Guest prize to Noreen McConigley who carded an impressive 36pts on her home course.

Deirdre thanked all the officers and members of the Society for their support during her year as Captain which she enjoyed immensely and also thanked Portsalon Golf Club for hosting her Captain’s Prize Outing and for the excellent food served on the day.

All that was left to do was announce the winner of this year’s Golfer of the Year and what a close battle it proved to be. He may have been disappointed with how his round went on the day but he had plenty of money in the bank already with his very fine form throughout the season which saw Tommy Greally come out on top with 100 points to be deservedly named Donegal ETB Golfer of the Year 2019/20, just pipping Rory White into 2nd place by two points. Jim McGlynn finished in third place on 90pts. Huge congratulations to Tommy on a fine achievement and a reward for some great golf.

So that is that for the wonderful Donegal ETB Golf Society for another year and thoughts will now swiftly turn and look forward to the 2020-21 renewal with none other than Mr Jim McGlynn taking the reins as Captain!