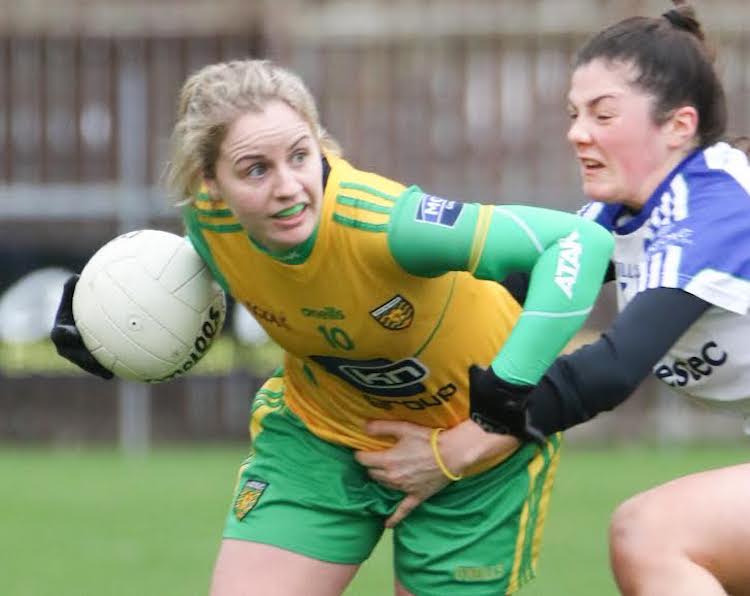 ROISIN Friel hobbled on the sidelines as Termon’s ladies returned to the top of the Donegal football tree last year and vowed to get back to the big days herself.

Friel suffered a bad achillies tendon injury during Donegal’s 2019 Ulster campaign, but has been back on song for Termon as the Burn Road brigade have marched back to the county final.

A win over Naomh Conaill in last Sunday’s semi-final has fired Sean O’Donnell’s team into Sunday-week’s final, where they meet the winners of this weekend’s second semi between Glenfin and Moville.

Friel clipped three hysoints in the 3-14 to 1-3 win over Naomh Conaill and now dearly wants to make up for lost time.

“It’s taken me 14 months to get back here so I’m definitely glad to be in the final,” Friel told Donegal Daily/Donegal Sport Hub.

“Mentally, it was very tough. I had no job, I was on the dole in the end up. It was a lot of pressure personally, but the team here in Termon was a great support.

“I can’t overestimate the benefit of the likes of Olive and Roisin McCafferty, who are physios. When you’re coming back into the squad form an injury, these girls here have your back.”

Friel’s way back into the team has not been straightforward with the Covid-19 lockdown delaying her return by a few months.

She had felt ready to return in the weeks before the pandemic took its strange and uncertain grip. As the weeks passed, waiting turned to wondering before finally she was back on a championship stage again.

Friel said: “I was ready mentally at the start of the year and Covid flung me. I was probably more ready back then.

“I had 15 minutes against St Eunan’s in early March. The boys (O’Donnell and Nathan McElwaine) gave me time to come back in and it’s great to be back.”

Termon overcame Glenfin in last year’s county final before continuing the odyssey all the way to an Ulster final in which they were pipped by Donaghmoyne.

The 2014 All-Ireland champions have added some new blood to their cause and Friel is encouraged by the likes of young Ciara McGarvey, who netted a crucial penalty at the start of the second half last week.

Friel said: “Ciara stepped up and finished the penalty well. Their ‘keeper had made a couple of great saves. The penalty put the energy and the power behind us to drive on and close the game out.

“Ciara has that ability. You see what she is like in training and she has been a great extra asset to have. It’s always nice to have an extra inside forward to get a few scores.

“We have a bit of new blood in the last while. Aibhe McDaid had a great first half ’til she got injured and Chelsea Gorman, if she had a GPS on it would show she covers serious ground.

“It’s great to have that and it puts pressure on us older ones to step up and keep the places. That’s what you want.”

Termon were shaken a little by Naomh Conaill’s defensive set up on Sunday. Indeed, they were held scoreless for the first 17 minutes before Friel opened the scoring.

Termon pulled away in the second half, but Friel admits they have work to do.

She said: “Naomh Conaill didn’t come to let us tramp over the top of them – and credit to them for that.

“We were shaky at the start, there’s no denying that. They were well set up and we weren’t able to handle it for the first 15 minutes. After that, we got into a rhythm, stuck to the system and went at it.

“They were hard to play against. The defensive set up threw us. To completely find a team inside the ’45 was hard to deal with. You have to be very patient, but we got a couple of points to set us on our way.

“The game was never out of our control.”

St Eunans vs St Nauls  – In MacCumhaill Park at 1pm

Urris vs Malin – In Carndonagh at 11am