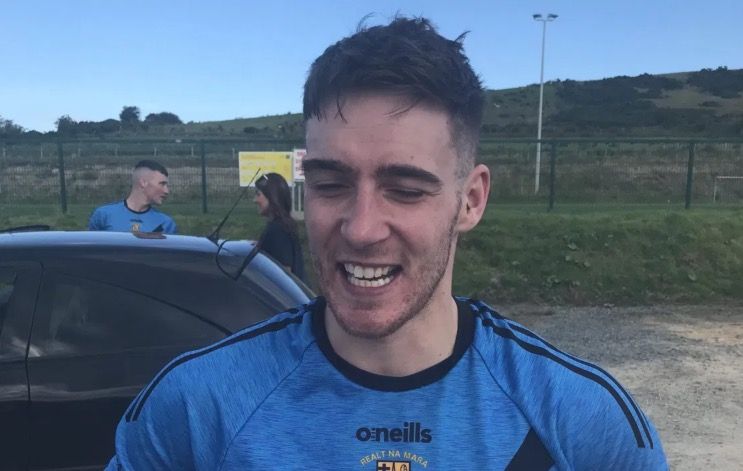 written by Alan Foley August 29, 2020
Facebook0Tweet0LinkedIn0Print0
Bundoran and Glenfin both have their minds firmly focused on next weekend’s Donegal SFC quarter-finals but in didn’t stop them from serving up a very entertaining match it the Regional League on Friday at Gaelic Park.
Bundoran 1-18  Glenfin 2-13
Bundoran will  head to Letterkenny next weekend whilst the Glenfin lads have the small matter of a date with current county champions Naomh Conaill to look forward to, the two sides got a more than useful runout. In the end it was the Seasiders who came through by two points, thanks in no small part to Alan Russell’s penalty.
Adam McGlone hit the home side’s first score after two minutes but three unanswered points from Ciaran Brady Ross Marley and an Odhran McGlynn free had the visitors 0-3 to 0-1 ahead on five minutes.
Glenfin should  have went further ahead but a Ross Marley effort cannoned off the crossbar and Alan Russell went up the other end to point for Bundoran. Brady hit Glenfin’s fourth point and Ronan Carlin soon added to the total with a fine effort.
A Gary Dorrian effort put four between the sides before an excellent Alan Russell  point stemmed the tide. An Odhran McGlynn strike was cancelled out by Cian McEniff on 14 minutes to leave the visitors ahead 0-7 to 0-4.
A Cian McEniff free was replied to by a mark from Kyle O Meara on 21 minutes. Bundoran dominated the closing stages and hit three points in a row from McEniff Timmy Govorov and Shane McGowan from a quick free.
Conor McBride edged Glenfin back in front before McEniff hit the final score of the half to leave the sides level at halftime 0-9 apiece.
Karl McGlynn got the second  half scoreboard ticking with a well taken shot before McEniff levelled matters again from a free.
The first goal of the game arrived courtesy of Kyle O Meara on 34 minutes after some great work and quick thinking from his fellow forward Ross Marley. Glenfin should have rattled the net again seconds later but Marley blasted the ball into the side netting with the goal at his mercy.
Diarmuid Spratt pegged one back for the Seasiders and the same player was upended soon after to give Bundoran a penalty which Russell calmly  converted to put them 1-11 to 1-10 ahead.
Three further points from Russell Darragh Hoey after a brilliant parry from goalkeeper Walsh and Spratt put 4 between the sides before half time sub Matthew McGinley replied for Glenfin.
Two further scores from Oisin Walsh and Govorov left it 1-16 to 1-11 on 56. Glenfins Kyle O’Meara reduced the margin before a Hoey free left five points in it entering injury time. An exciting finish ensued when a Brady point was quickly followed by a well worked Glenfin goal by Daniel McGlynn to leave only a point between the sides.
But it was the men in black and amber who would hit the final score a free from Timmy Govorov to give them a first league win of the season. Bundoran will be pleased with the strong midfield performances of Peter McGonigle and Cian McEniff as they head to O’Donnell Park next weekend whist the Gaeltacht men will also look to improve for their visit to Glenties.
Bundoran: Conor Carty; Barry McGowan, Diarmuid McCaughey, Niall Carr; Oisin Walsh (0-1),
Alan Russell (1-3, 1-0 pen), James Stewart; Cian McEniff (0-5, 3f), Peter McGonigle; Shane McGowan (0-1), Timmy Govorov (0-3, 1f),  Adam McGlone (0-1); Daragh Hoey (0-2, 1f), Diarmuid Spratt (0-2) James Keaney. Subs Jamie Jacksie Gallagher for Spratt (50), Jack Delaney for Barry McGowan (56).
Glenfin: Andrew Walsh; Jack Marley, Odhran McGlynn (0-2), Darren Marley; Gary Dorrian (0-1),  Martin O’Donnell,  David Carr; Ciaran Brady (0-3), Frank McGlynn; Kaine McGlynn, Ross Marley (0-1),  Ronan Carlin (0-1);  Kyle O’Meara (1-2),  Karl McGlynn (0-1), Conor McBride (0-1). Subs: Daniel McGlynn (1-0) for O McGlynn (half-time), Gavin McDermott for O’Donnell (half-time), Matthew McGinley (0-1) for K McGlynn (half-time), Gary Herron for Frank McGlynn (39), Shane McGinty for R Marley (47), Kyle Doherty for D Marley (56).
Bundoran pip Glenfin in entertaining Regional League encounter was last modified: August 29th, 2020 by Alan Foley
Facebook0Tweet0LinkedIn0Print0
Tags:
2020 Regional Leaguebundoranglenfin