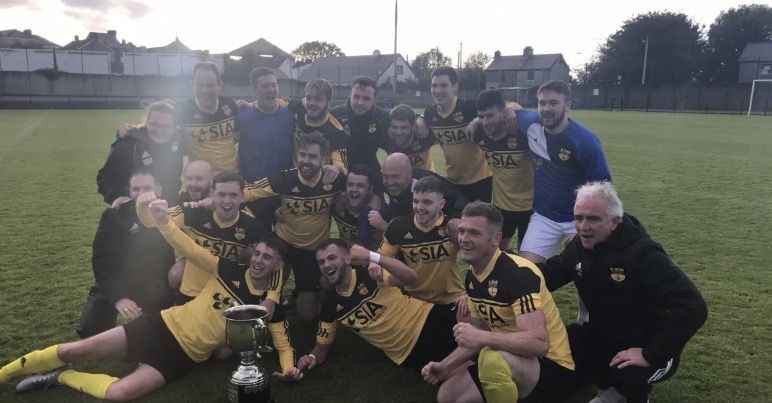 This clash of the new Premier Division champions Aileach FC and the team they pipped for the title Glengad United produced a lively encounter in tricky windy conditions but on a super playing surface at Maginn Park in Buncrana with extra-time required to decide it, writes Charlie Collins

Glengad had much the better of the opening half and could have been further ahead than their 1-0 lead. Aileach did improve after the break and got back into with an Aaron Nash goal following a error in the Glengad defence.

Aileach FC were forced to make an early change when Shane McMonagle , who had been doubtful , had to be replaced by Paddy Slevin in the fifth minute.

Glengad Utd has the better of the early stages in windy conditions and in the 10th minute should have taken the lead when John McDaid’s corner found James McKinney but despite having time and space he headed over from six yards.

Eight minutes later McDaid was again the provider, heading Conor Barrow’s cross into the path of Stephen Fildara , his shot was pushed onto the bar and was cleared by Cathal McElhinney .

Glengad went close again in the 21st minute, the lively Barrow setting up Dillon Ruddy who’s shot from 20 yards was just over. Aileach finally threatened in the 25th minute when Ethan Canning popped up on the edge of the Glengad box and his cracking shot was brilliantly saved by Daniel Mullarkey .

In the 38th minute Glengad could have increased their lead, Stephen Fildara having his first piledriver blocked and his follow-up straight at keeper Kyle Dougal. Glengad’s game-plan of three at the back, Conor Barrow wide on the right and Stephen Fildara up front with Doherty caused plenty of problems.

Just before half-time it could have been 2-0, Fildara’s corner found it was to Matthew Byrne but on his weaker right foot he blasted over the bar to leave it 1-0 in Glengad’s favor at the break.

Aileach started the second-half much better and looked more dangerous going forward than the had. But again they needed help to get back on level terms in the 56th minute. Glengad’s defence looked to have an Aileach attack under control but Matthew Byrne’s attempt to pass to Fionn McClure didn’t come off as the full back slipped allowing Aaron Nash to race clear on goal and although keeper Mullarkey got a foot to his shot it still had enough power to trickle over the goal line , 1-1 and game on.

Glengad were finding it difficult to create but finally did when Stephen Fildara set up Conor Barrow but his angled shot was well saved by Daniel Mullarkey. In the 72nd minute Darren McMonagle forced another good save from Mullarkey and two minutes later Aaron Nash also had a shot blocked as Aileach continued to hold the upper-hand.

The longer the game went the more likely extra-time looked as chances dried up and so it came to pass between these two so evenly matched teams.

Glengad regained the lead in the 96th minute , Sub Joe Doherty was fouled 25yards out , Fionn McClure’s super curling free was brilliantly saved by Kyle Dougal but Stephen Fildara reacted quickly to get on the rebound and when he pulled the ball across the six yard line for Joe Doherty to hammer it into the roof of the net, 2-1 to Glengad.

With tiredness becoming a big factor both teams understandably found it difficult put much good football together and Glengad comfortably protected their precious lead to add another piece of silverware to their impressive trophy cabinet. Disappointment for Aileach FC but the League champions did achieve their main goal of the Premier League’s title.