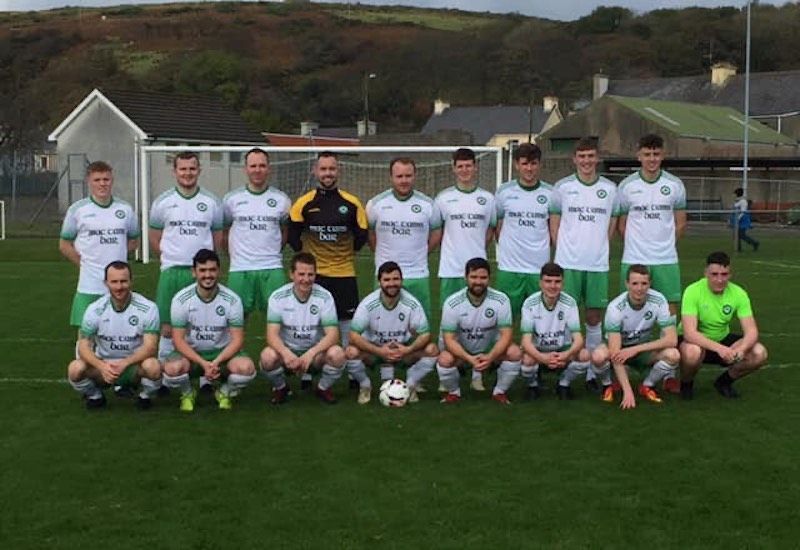 Neighbouring Clonmany Shamrocks and Rasheney FC will battle it out for the Fr O’Gara Cup next week after both came through their semi-finals in Inishowen.

Three second half goals were enough for Clonmany to seal a win that looked comfortable in the end against Dunree United – who certainly had their chances.

The game started at a good tempo with Dunree pressing Clonmany high up the pitch.

The first chance fell to the home side after the ball broke on the edge of the area to Jamie Brosnan whose volley was brilliantly saved by Patrick Harkin in the Clonmany goal.

Dunree thought they had broken the deadlock after Kyle Barrett had finished Brosnans cross but the referee had blown for an infringement. Clonmany responded and Pearse McCarron dragged an effort wide before Jason Devlin had an effort blocked by the legs of Sean Parker.

At the other end  Cathal McNutt slipped a pass into the path of Brosnan but again Harkin saved.

On the stroke of half-time Dunree were out of luck when Barretts effort came off the crossbar. Dunree hit the bar again following a corner with Caolan McBride’s effort hitting the woodwork on 52 minutes.

On the hour mark Clonmany  substitute Mark McLaughlin broke the deadlock when he pounced on defensive indecision and drilled past Parker.

They doubled their lead soon after with Shane McCaul finishing well from the edge of the area.  The shamrocks were well on top at this stage and further extended their lead when Jake Harkin coolly finished past Parker in the home goal to set up a local derby against Rasheney in the final.

Danny Grant’s Rasheney showed tremendous resolve to some from two down at the break and win 3-2 to advance to the final next week where they will meet parish neighbours Clonmany.

The home side had the first chance but David McLaughlin fired over from a good position. The Point then took the lead on 10  minutes after Fionbhar Harley collected a through ball and advanced to drill a low shot past Paddy McGilloway.

McGilloway then collected a long range David Healy shot at the second attempt. Rasheney responded and Conor McDaid blazed over from ten yards before the  same player saw an effort come off the bar to Caylum Long whose  follow up effort crashed off the post.

McDaid then skied another effort over the bar  from the penalty spot before the point responded. Firstly Ross Nicholas had a goalbound effort headed away by John McLaughlin.

Then they increased their lead on 29 minutes after the home defence held a high line allowing John McCloskey to race clear and drill past the advancing McGilloway from twenty five yards.

Rasheney continued to create chances and McDaid miscued from close range before heading a Charlie Doherty cross over the bar. Rasheney started the second half the better and reduced the deficit when a corner broke to John McLaughlin and he guided a superb shot inside the right hand post.

At the other end  after a defensive slip Healy shot past McGilloway but McDaid got back to clear of the line. Play was going from end to end and a Charlie Doherty free was well tipped over by Oisin Burke.

Rasheney then got back on terms on 81 minutes when Doherty brilliantly converted a penalty to the top right hand corner after David McLaughlin was upended. In a crazy finale both sides had chances to win it.

McGilloway advanced outside the area  but only cleared the ball straight to Healy whose effort towards an unguarded goal came back off the post. Rasheney broke to the other end and great work by David  McLaughlin on the right saw him cut in and square the ball for  Declan McLaughlin  to wrongfoot defenders and keeper and slot home from close range.