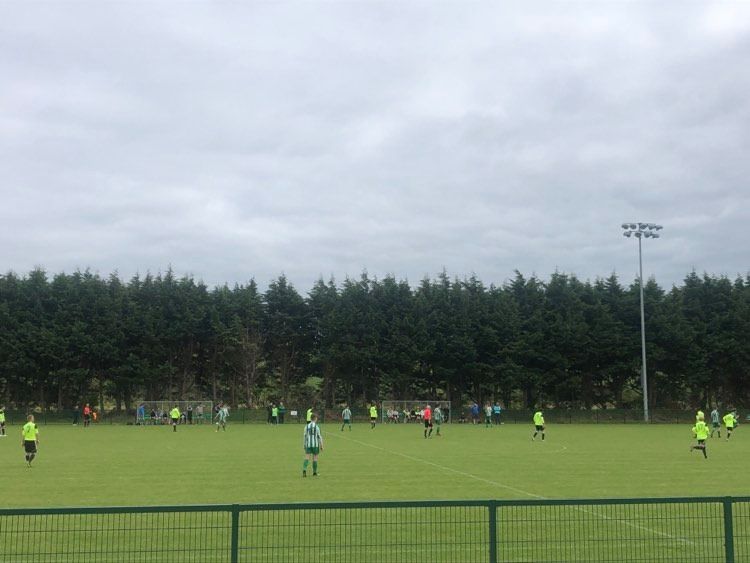 ST CATHERINE’S preserved their place in Division 1 of the Donegal League as the Saints saw off Division 2 Whitestrand United in this afternoon’s play-off at Ballyare.

Niall Campbell and Ryan Cunningham netted the goals as St Catherine’s claimed victory from the latest game played in a strange and forbidding behind-closed-doors environment.

The main gate was barred, the stand cordoned off and unfortunately only a sparse few officials and media present to see an exciting tussle.

St Catherine’s got off to a perfect start, grabbing the lead just four minutes in, Campbell coolly tucking past the advancing Kyle Burns after being put clear by Evan Broderick.

A Cunningham penalty in the 58th minute sealed the win and prevent the Killybegs men from falling through the trapdoor.

This fixture had originally been fixed for Sunday, August 9, but was called off late in the day due to a suspected Covid-19 case relating to the Whitestrand club.

‘Strand were irate at the three-week delay in re-fixing the game and during the week manager Brendan Callaghan accused the Donegal League of ‘sporting gerrymandering’ over the scheduling. In a statement issued by his club, Callaghan questioned whether the fixing of the game was ‘to satisfy Gaelic football players’.

The arrival of a St Catherine’s squad whose starting XI was boosted by no fewer than six players – Michael Mullin, Jon Ban Gallagher, Evan Broderick, Ryan Carr, Christopher Murrin and Campbell – who had featured for Killybegs in their Donegal SFC defeat by Dungloe last Sunday will surely have fuelled the Whitestrand fire further.

Midway through the first half, Campbell and Barry Cannon linked on the edge of the D with Cannon’s shot rising just over the top.

Burns superbly kept ‘Strand in it on 34 minutes. Cannon robbed Michael Herrity of possession and his centre was perfect for Ryan Cunningham, but Burns was equal to his attempt.

Whitestrand – who had struggled for chances with Shaun Kerr skewing off-target early on – began to search and Kevin McCarry, after being teed up by Paul Ferry, fired wide.

The McGarvey Park men were inches from a leveller late in the first half. James Kerr combined with Kevin Loughrey in a well-rehearsed corner routine with Kerr’s right-footed effort grazing Michael Mullin’s post.

In added time, St Catherine’s almost hit a second, but Niall Trearty blocked on the line when Campbell seemed set to turn in from Ryan Cunningham’s cross with ‘keeper Burns recovering to gather the pieces.

The afternoon had a little needle at times with referee Mick Lagan showing four bookings inside the opening instalment. Another two followed in part two.

St Catherine’s made safe the win 13 minutes into the second half. Herrity was adjudged to have fouled Campbell and Cunningham stepped up to slot the penalty into the bottom corner.

Christy Cunningham might have added a third but a 71st minute chip, after he picked up an attempted clearance by Burns, fell the wrong side of its intended target.

Cannon tested Burns from the edge of the area after a sweeping St Catherine’s move, but the ‘Strand goalkeeper was able to hold onto the shot.

Whitestrand almost pulled one back four minutes from the end, but Darren Ferry’s goal-bound shot was headed up and over by Ryan Carr from the chalk of the goal-line.

The Saints were Premier Division champions as recently as the 2014/15 season, but almost found themselves in Division One’s quicksand. This win ensures that Division One football will return  to Emerald Park next season.