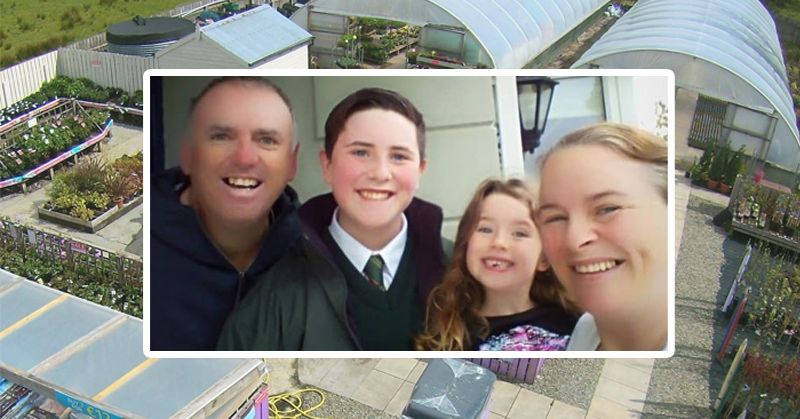 Heartbroken mum Geraldine’s plan to honour family in their garden

Heartbroken Geraldine Mullan plans to plant four apple trees in the garden of the Moville home she lovingly shared with husband John and her children Tomas, 14 and Amelia, 6.

The three died following the horrific car crash at Quigley’s Point on August 20th as they returned from a family day out.

The cancer nurse revealed in recent days that her wish for her family’s memory is that other people cherish eachother and to tell eachother how much they love one another.

Geraldine, a cancer nurse at Letterkenny University Hospital, told how her late husband John showed Amelia and Tomás how to use the pits in apples to grow apple trees.

She told how the four apple seeds planted by Amelia, Tomás and John have grown to be 12 inches high in their pot.

When Geraldine has a cast removed from her hand, she will plant the four saplings in a corner of the garden.

In a wide-ranging interview with the Sunday Independent, Geraldine said she hopes the love she feels for her lost family will sustain her.

And she repeated her wish that people do not take love for granted – tell people they are loved.

Recalling that fateful day she last spent with John and the children, she said: “Probably on three or four occasions during the day, John turned to me and said, ‘I love you, sweetheart’. And I said, ‘I love you too, darling’.”

Geraldine’s courage at her family’s funeral moved the nation last Monday when she spoke in Moville, and urged the congregation to “hug and kiss” their loved ones when they arrive home and to tell them how much they mean to them.

She said she is receiving care at her home from relatives and friends, including her parents, Mautie and Margaret Connaughton, who travelled from Williamstown, Co Galway.

Geraldine told the Sunday Independent: “Cherish every moment you have with your loved ones because in a minute all that can change. That would be the essence of my message.”

John and Geraldine first met when she was nursing his mother Philomena, who died on August 19, 2010, almost 10 years to the day that John and the children died.

Geraldine feels so grateful for the day John entered her life. They would chat for seven or eight hours and she did not want the conversation to end.

“John was my true love and my soulmate and my best friend… I’m very lucky. John showed me what love was,” she said.

“We loved writing notes and cards to each other. There was a box I gave John on Valentine’s Day in 2017. On the box was written: ‘Cherish each day because I love you.’ When he opened the box, he found I had written notes for him to read every day of the coming year so there were 365 notes of love for him,” she said.

“John was a big, strong man but he didn’t care if there were 20 people in the garden centre – he would always tell me he loved me and gave me a hug and a kiss.

“People would laugh and joke and say: ‘Oh, you auld romantic.’ And John would say: ‘Well, she is the love of my life,'” she said.

Geraldine opened her husband’s garden centre last weekend in his honour to sell off the stock and will continue to do so over the next two weekends.

Now she faces into life without her three most precious loved ones.

“If there is a legacy from John, Tomás and Amelia, it is there is plenty of love out there,” she added.