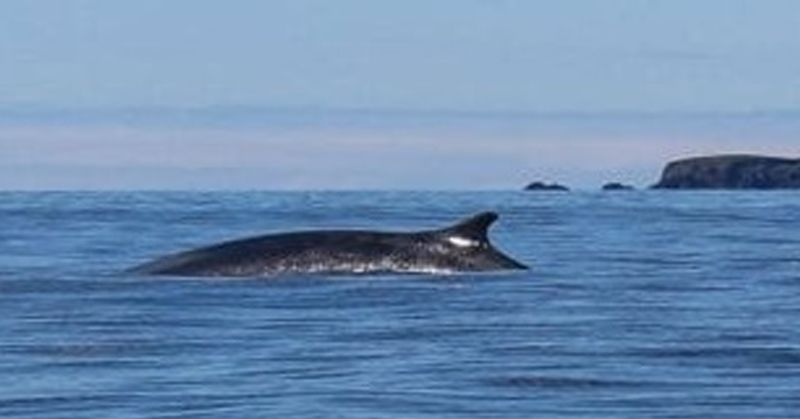 The Irish Whale and Dolphin Group has announced the first validated sighting of a fin whale off Co Donegal.

The huge creature was pictured in Donegal Bay, close to Slieve League on 8th August.

While the fin whale is commonly spotted along the Celtic Sea area and in southwest waters, the IWDG said the sighting in Donegal Bay is a remarkable event for the entire county.

The fin whale is the second largest mammal in the world after blue whales and they are the largest whale that can be seen in inshore Irish waters.

“On 8 August Liz Morrow was on a boat trip in Donegal Bay when they encountered a single large whale off Slieve League that was about 2.5 – 3 times larger than their 6.5 metre RIB,” the IWDG reports.

“The sighting was reported to IWDG with images as a “probable” fin whale and on viewing all the images, we are satisfied that this was indeed a fin whale Balaenoptera physalus.”

It is possible that the fin whale was seen again off Teelin five days later, as the IWDG received a report of a “large whale species”.

The group has shared a guide for anyone who is hoping to catch a glimpse of the impressive creatures.

“This could be an interesting time for local IWDG members in Sligo looking north across the bay from places like Mullaghmore or for Donegal members watching from the many superb vantage points from St. John’s Point west towards Rathlin O’ Beirne.

“Any large whales that simply look too large to be a minke or humpback and produce a powerful columnar ” blow” on surfacing, should be considered as likely candidates. They will often be accompanied by common dolphins who hunt the same sprat and herring shoals and they rarely lift their tails before diving.

“If you think you may have fin whales with you, best to approach them from the right side and photograph their head and rostrum, which should reveal the diagnostic lower white right jaw (which is dark on the left side).”

The IWDG is celebrating this positive development for Donegal following the sad stranding of seven Northern bottlenose whales on Rossnowlagh beach two weeks ago.