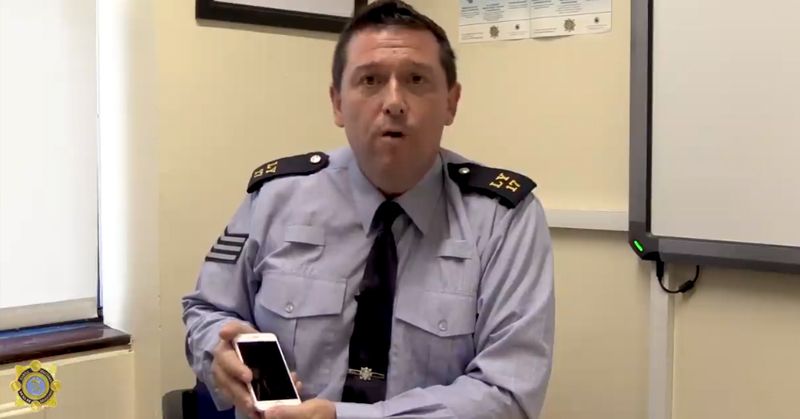 Gardaí urge all smartphone users to get ‘Find My Phone’ app

Gardaí are appealing for smartphone owners to be ’Streetwise’ by downloading a trusted app to improve the likelihood of finding lost or stolen phones.

Smartphone users are being asked to get the ‘Find My Phone’ app and adding an emergency contact number to their phone.

The appeal follows the release of figures by the Garda Síochána Analysis Service which show that 11,488 mobile phones have been stolen since the beginning of 2019. Of those, only 1,176 (10%) have been recovered.

Speaking at today’s campaign launch Crime Prevention Officer for the Meath Division, Sergeant Dean Kerins said, “The price of mobile phones makes them a clear target for criminals, so let’s try and deter them by increasing phone security. If you a have a smartphone, we recommend downloading a trusted location finder app so if it is lost or stolen, you have a better chance of getting it back. Some phones already have a feature like this already so have a look in the security settings on your phone.

“We also highly recommend that you add a family member or friend as an emergency contact in your phone. If we receive a lost or stolen phone, we will be able to contact that person. Our property stores throughout the country receive a lot of stolen and lost phones that we cannot trace the owners for. Adding the emergency contact will help solve this problem.

“Other preventative measures you can take include enabling the PIN Security feature, keeping your phone locked at all times, and property-mark it with unique personal letters or numbers.

“For those who do not own a smartphone, call *#06# on your keypad and note the IMEI number that comes up. This is a 15 digit number that is unique to your phone. If your phone is lost or stolen, call your service provider immediately so they can block the phone.

“If you believe your phone has been stolen, you should call Gardaí immediately. Do not follow the person via your tracking app”, warned Sergeant Kerins.

The most commonplace for phones to be stolen is out in public or in a licensed premises, so Gardaí are also advising the following:

In July of this year, whilst cycling the Gap of Dunloe in Co. Kerry, Valerie Nohilly had her phone stolen. She left her backpack and bicycle on the roadside as she took in some of the scenery. The opportunistic thief took her backpack and was gone before Valerie returned.

Luckily, Valerie’s son had helped her install a tracking app on the phone and she was able to trace the phone to an area of Portlaoise.

She reported the matter to Gardaí in Kenmare who reviewed CCTV from the area and liaised with Gardaí in Portlaoise. A possible suspect was identified and he was arrested and brought before the courts. Valerie’s phone was recovered during this search and returned.

Speaking today, Valerie said, “It was a great relief to be reunited with my phone as it contained many photos and videos of happy times spent with my family during the COVID lockdown, as well as all my contact numbers.

“I was astonished that my twelve-year-old son Tom had activated a tracking device a few weeks earlier. Within one hour of the phone being taken, he used my laptop to deactivate the phone and put a message on it asking whoever had it to phone my husband’s mobile number.

“We were so fortunate that the staff in Mace in Kenmare were kind enough to put us in touch with Garda Seán Twomey who could not have been more helpful. Thanks to his fast actions and those of the Gardaí in Portlaoise, I was reunited with my phone less than 48 hours after it was taken.

“I am so grateful to everyone who helped to reunite me with my phone and would recommend everyone to activate a tracking device on their phone.”

In this instance, Gardaí would have found it difficult to investigate the theft because it occurred in such a rural location. The tracking app and the quick actions of the woman was the key to the investigation.

Gardaí urge all smartphone users to get ‘Find My Phone’ app was last modified: September 2nd, 2020 by Rachel McLaughlin