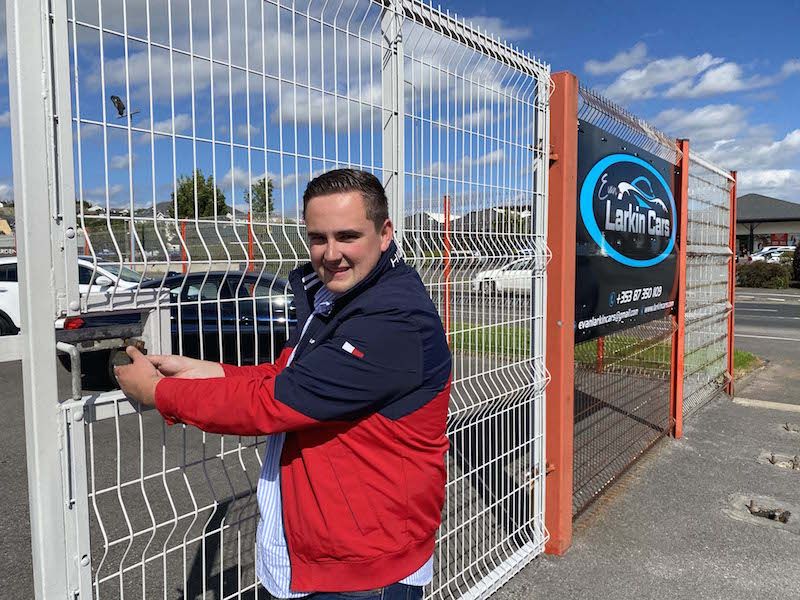 Out of the ashes of one of the recent break-ins in Letterkenny local people have come together to help a young businessman back on his feet.

The generator at the back of this new secure lock-up portable cabin nearly tells you everything. There was nothing planned about this.

Just as it wasn’t planned, over a year ago following his father’s health scare that Evan Larkin took the wheel of his father Ciaran’s business selling used cars and small commercial vans on the Pearse rd in Letterkenny.

This young likeable Letterkenny lad was working well as the third generation of the Larkin family to work in the motor trade in Letterkenny.

His late grandfather James, who was also an urban district councillor had a filling station selling Burmah petrol at the side of his home at the foot of the town opposite the old Dunne’s stores.

His father Ciaran started selling cars in the same location before moving to the Pearse Rd twenty years ago located between the old part of Letterkenny and the newly developed retail park area. 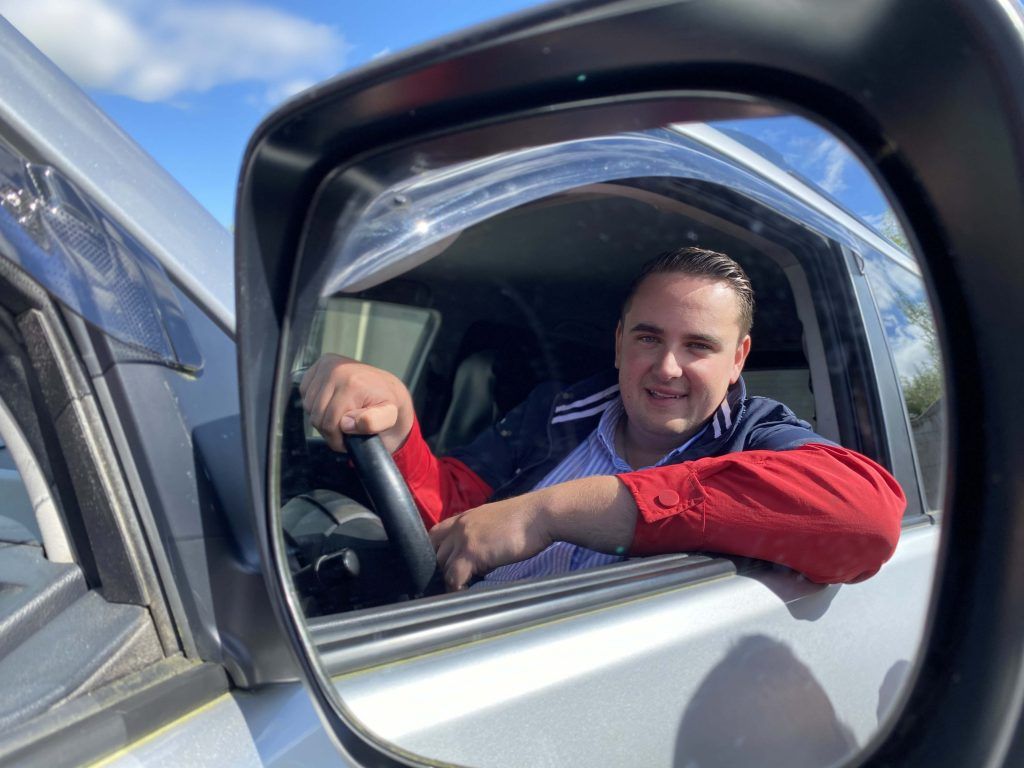 Local Letterkenny business man Evan Larkin back on track this week and back in business following a break in at his business. Photo Brian McDaid.

Evan, who took over the business a year ago, went through the impact of the lockdown at the start of this year and opened up again as soon as it was safe to do so.

He sold his first new “202 DL” car in July this year and sold three more new cars since along with a range second-hand cars and light commercials.

Evan said the business was really taking off again when the Larkin business was one in the area to be hit with a spate of break-ins that ended up with a fire in the middle of the night.

That did a lot of damage gutting their sales office, gutting two cars completely destroyed a lot of the other cars suffering smoke damage.

The biggest damage was done to a container holding all the keys for the cars in the forecourt. A replacement key for any car, as anyone will know that had to replace them, is very costly, but all of the keys of the cars in Evan’s forecourt were destroyed in the fire.

Evan was away in Galway when he got the word that his business was destroyed by fire. He came up the road with a knot in his stomach thinking what was he going to do.

“It would have been very easy for me to just lock myself in my room both physically and mentally but Letterkenny didn’t let that happen,” he said.

Local businesses and friends in Letterkenny were great. A secure lockup office and generator was offered by John Watson from Watson Hire, a company that was only too well aware of the damage that fire can do to their business, losing everything earlier this year. 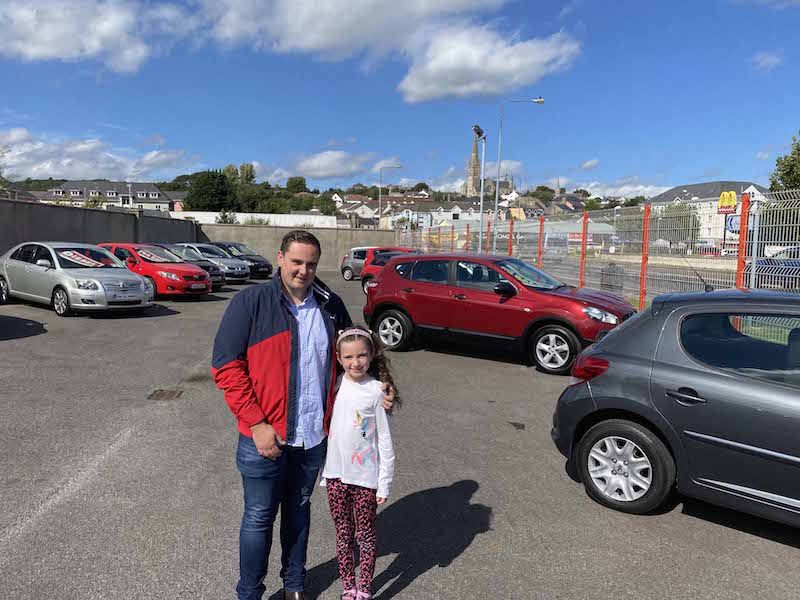 Evan Larkin and his sister Lexi pictured at the new premises he move to this week to get his old premices sorted. Photo Brian McDaid.

Businessman Tony Kelly offered Evan the use of a compound across the road from where they were to get themselves organised with a sales office of their own.

Evan said “So many landed at the weekend to both give us a hand one boy landed with a kettle and another boy landed with a TV which we are using to monitor the premises. Others just called with a few words of encouragement as we try to recover from this break in and fire damage to our business.

“We have no power on site here but that’s not going to stop us. We have a generator on site providing electricity thanks to John Watson. We got our broadband up and running again and the card machine was set up again.” 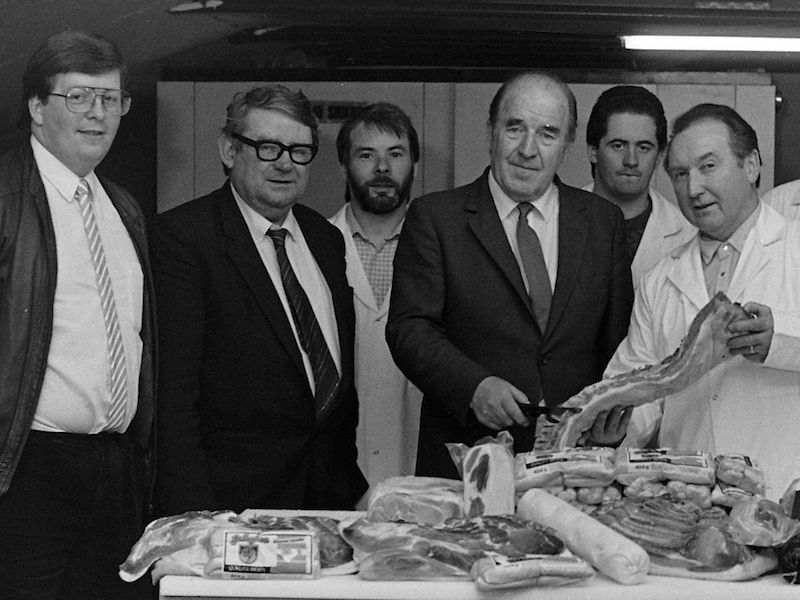 Evan was looking up the Eircode this week, and it’s the first time he knew what the actual name of the road was that goes round the retail park was called.

“We are on the Paddy Harte Road now. I wonder what my late grandfather James Larkin would think of that?” Evan joked. James Larkin was a big Independent Fianna Fáil and Blaney man. “What was that saying” he joked “Don’t take it to Harte, take it to Blaney, or in my case better still take it down to Larkin if it’s a second hand car you’re looking to get sorted.”

On older maps of Letterkenny, Evan’s new home for his business is actually on the old road that was once a part of Larkin’s Lane where his great grandfather Frank started a bakery in the 1930’s.

History kind of repeated itself because on a summer night in 1942 also at around 1am in the morning a fire was also discovered at his business.

Back then great work by the local community and fire services from Letterkenny and Derry brought the fire under control. The community rallied to support the bakery and its family and nearly 80 years on that same old Letterkenny spirit was on hand in the last few days to get another businessman back on his feet after a fire.

This week the cars are looking fantastic in the new temporary home. There is a great wee buzz at the foot of the town this week Evan’s phone is hopping again both with calls of good wishes and support and most importantly calls relating car sales enquiries about what’s available in the motor trade.

This week when I was ringing Evan to get a few words about his relocation when he answered the phone I thought I was chatting to his father. Their voices are identical, and I was going to ask Ciaran to put Evan on the phone so I could chat to him. Over the years as a news photographer, I had the pleasure of knowing Evan’s grandfather James and covered the events as he represented the town as mayor and councillor. 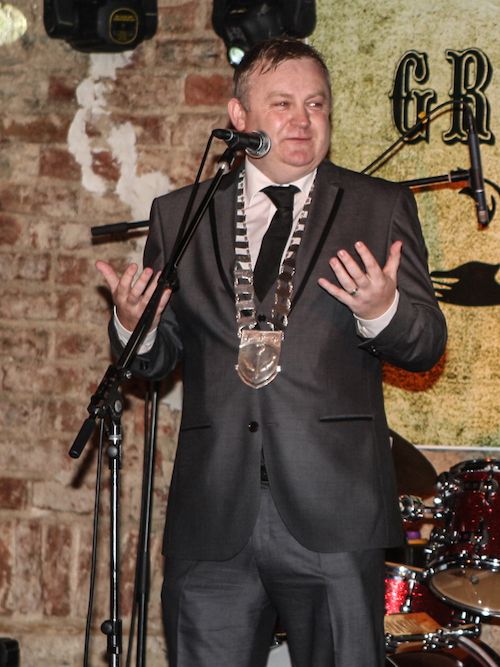 2012. The late Cllr Dessie Larkin at the function to celebrate his position as Mayor with Letterkenny UDC for the incoming term. Photo Brian Mc Daid.

A great footballer in his day, he was the Town Mayor who welcomed the Sam Maguire and the Donegal team and manager Brian McEniff to Letterkenny in 1992. I also had the pleasure of knowing Evan’s late uncle Dessie, also a councillor and Mayor of the town and Mayor of Donegal County Council who sadly passed away suddenly on the 18th of March a year past, missed by so many. 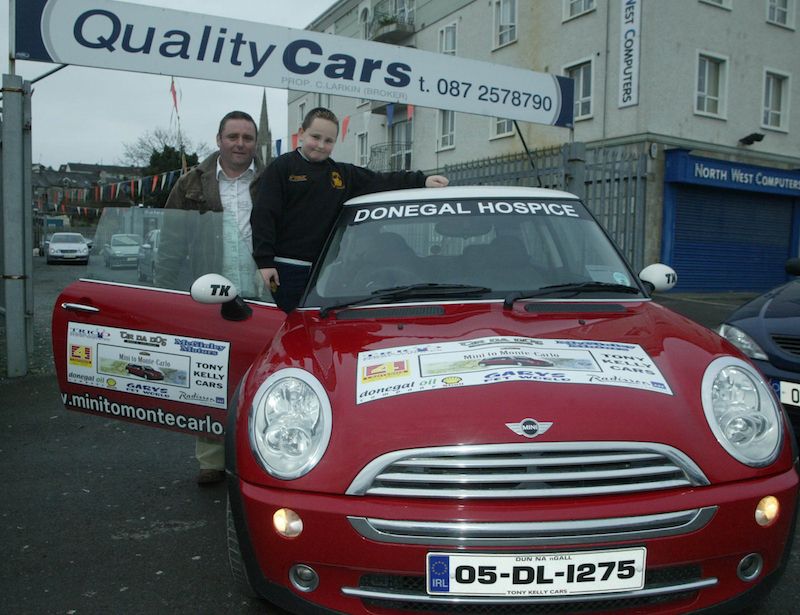 2005 HOSPICE BOOST
Ciaran Larkin ,proprietor of Quality Cars on the Pearse Road Letterkenny Co Donegal pictured with his son Evan as they donate 500 euros to the Mini to Monte Carlo in Aid of the Donegal Hospice. Photo Brian Mc Daid

Looking at a photo I took 14 years ago following a call from Evan’s father Ciaran in 2006 when we did a charity run for the Donegal Hospice in a Mini Cooper to Monte Carlo, Ciaran was on hand to give us a very generous donation to our fund.

On that day a young Evan stood up on the door sill so we could see him behind the door of the mini. Now 14 years on and young Evan is the present generation to be in business at the foot of the town and here’s wishing him every success in the future.