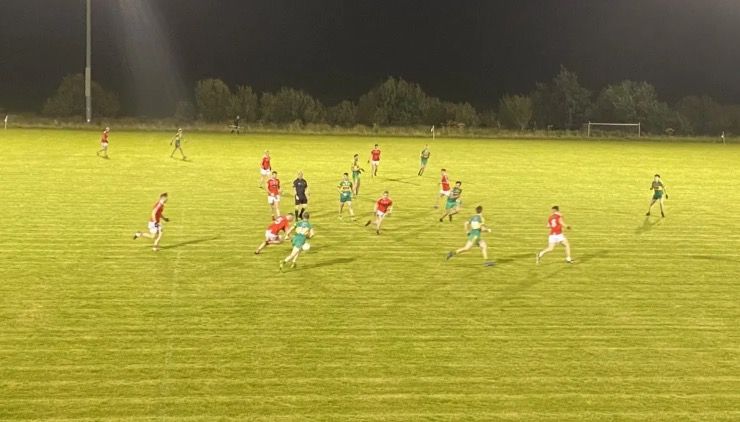 Convoy’s Centre of Excellence played host to a Donegal SFC match for the first time this evening as Ardara preserved their status and Dungloe remain in the dog fight.

Robert Weherly’s side will now have to take on the losers of next weekend’s rearranged semi-final between Termon and Milford, with the plank creaking beneath them.

Although the supporters both teams were forced to watch from home on the official County Board stream, those who did tune in were treated to an entertaining spectacle – possessing a rawness that these relegation play-offs tend to.

Both teams had been whitewashed in their opening four fixtures of the competition. That though, did not inhibit them in the vast open spaces of Convoy. Dungloe have been right in the mix in all their fixtures this season but alarmingly, having nothing but hard luck tales to tell.

They started badly, made their way back into it, flirted with the thoughts of levelling only to fall back again – that was the trend of the game. Ardara racked up the scores when they had to and will be glad to close the book on the 2020 SFC. They can thank Stefan Boyle for five points and Kevin Whyte with 1-3.

It was the side from Pearse Park who made the early running and suddenly and having only scored three points in their trimming by Bundoran last night, were a much more potent force from the off.

Inside of 10 minutes, they were 1-3 to 0-2 in front and looking good. The goal on seven minutes came from Kevin Whyte, when he ran onto a ball from Tomas Boyle to shoot past Danny Rodgers in the Dungloe goal.

Stefan Boyle and Ryan Malley also added a couple of scores, with Daniel Ward and Ryan Connors on the mark for the team from the Rosses.

A free from Noel McBride bought Dungloe back to three down, 1-3 to 0-3, at the water-break. Then, after it, when Daniel Ward cut in and saw his pop at goal tipped over the crossbar by Ciaran Gildea, Dungloe were starting to make their move.

Ardara had been economical to begin with, but in the second quarter saw Johnny McHugh and Stefan Boyle shoot wide, while Tomas Boyle got in on goal and could only hit the side-netting.

Stefan Boyle, though, added two frees to settle things again so by 20 minutes, Ardara were 1-5 to 0-4 ahead. McBride’s two frees for Dungloe meant it was 1-5 to 0-6 for Ardara at half-time.

When Barry Curran opened the second half scoring Ardara’s lead was down to one and Johnny McHugh’s reply for Ardara was a welcome one. From then on till the three-quarter mark it was all Dungloe. Stefan Boyle added two more, while Tomas Boyle and Kevin Whyte scores made it 1-10 to 0-8 at the second water-break.

Dungloe needed a goal and although they managed points from Daire Gallagher, David McCarron and Matthew O’Donnell late on, they were still two down, 1-11 to 0-12, with time as thin as the autumnal air. Noel McBride had a late chance from a free with the entire Ardara panel on the line but drive wide.

Ardara shine under the lights at Centre of Excellence as Dungloe move onto last chance saloon was last modified: September 5th, 2020 by Alan Foley