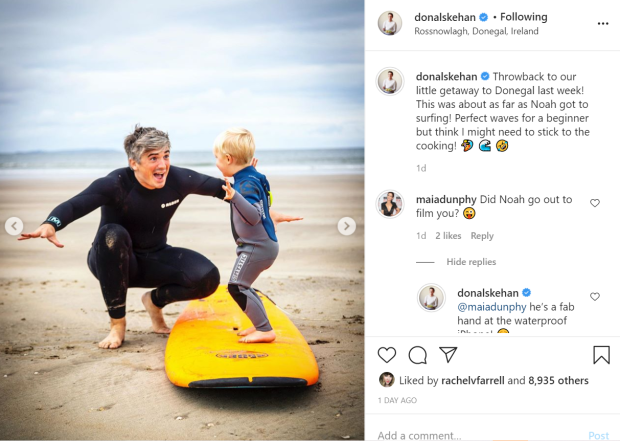 Another celebrity says the surf is up in Donegal!

Another Irish celebrity has praised Donegal after spending his staycation here.

In recent weeks lots of Irish stars have backed Donegal as THE place to holiday.

The latest star is celebrity chef RTE star Donal Skehan has shared some adorable snaps from his families staycation as he surfs with his young son.

The celebrity chef and his family recently spent some time together in Rossnowlagh on their second staycation.

Donal decided to take to his Instagram to share some adorable snaps with his son Noah as the pair went surfing.

The first picture he shared was of him and Noah both smiling to the camera while Noah stood on the board.

He shared some snaps of him trying to teach Noah and of himself holding the surf board on the beach.

Finally, the RTE star decided to share a hilarious video of himself surfing and he was even able to stand on the board.

“This was about as far as Noah got to surfing! Perfect waves for a beginner but think I might need to stick to the cooking!”

Another celebrity says the surf is up in Donegal! was last modified: September 5th, 2020 by Staff Writer