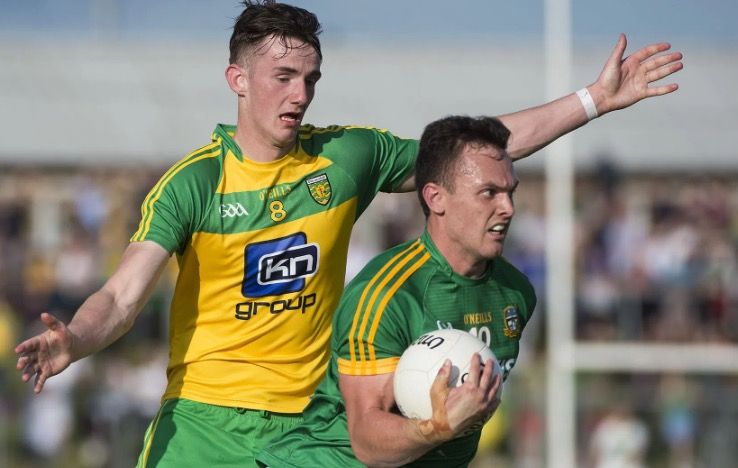 JASON MCGEE returned as Cloughaneely showed they are on the march in the Donegal IFC once more and have a semi-final to look forward to having beaten Red Hugh’s at PCC Falcarragh this evening, writes Charlie Collins

Another decent performance from last year’s beaten finalists could be best summarized as a match in which they didn’t reach the heights they can, although they didn’t look like losing it either. McGee has been blighted with a hip injury for over a year and made the most of one of his sporadic appearances, with two late points.

A four-point interval lead of the 2018 Ulster JFC winners meant arm’s length and Michael Lynch’s team maintained that in the second half.

Ciaran McGeady, John Fitzgerald and Paul Sweeney all scored points in the first eight minutes to set the tone. Calvin Bradley, though, would score six in all for the visitors.

By half-time it was 0-7 to 0-3, with Shaun Curran, Michael McHugh and a John Fitzgerald brace making up the hosts’ scores, while Bradley and a 45 from Peadar McGlinchey made up the visiting total.

Early second half scores from Conor Coyle and John Fitzgerald pushed the lead out to six, before Bradley and Tim Callaghan brought it back to four at 0-9 to 0-5.

Cloughaneely spurned a decent goal chance on 38 minutes when Curran shot wide from 14 yards following a set-up from McHugh and then substitute Jason McGee saw Luke Kelly save well.

McGee did manage the score a 45 and then one from play to put his team 0-12 to 0-6 ahead with nine to play. Bradley was Red Hugh’s best hope and he saw a goal chance come and go as Shaun McCafferty saved. It was probably what Red Hugh’s needed then.

However it never arrived and Cloughaneely go forward to the semi-finals and hope they can go one better than last year, when they went down to St Naul’s in the final.