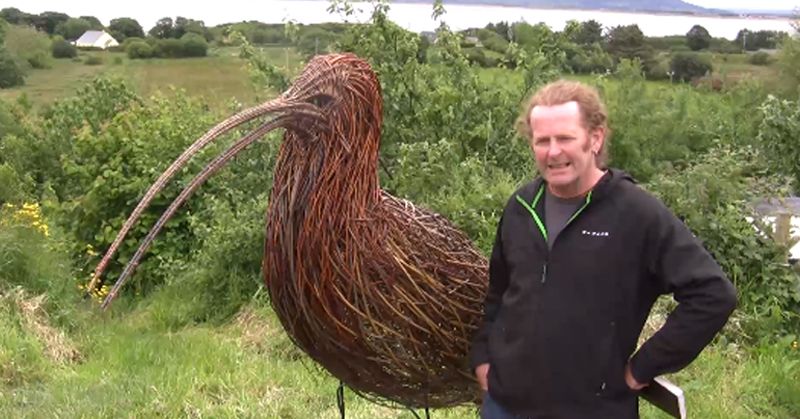 Three structures by Donegal artist Brendan Farren have been unveiled to celebrate the iconic Irish curlew.

The curlew, which can still be found in Donegal, remains under threat of extinction.

Inishowen-based artist Brendan Farren was commissioned by the National Parks and Wildlife Service and the Department of Agriculture, Food & the Marine to create three curlew structures from willow.

The structures were unveiled this week in Roscommon town, Ballyhaunis in Mayo and Drumshanbo in Leitrim as part of the Curlew Conservation programme.

Farren is the director of Big Green Art. A native of Co. Down, Farren said he counts himself lucky to see the curlew on the shore of the Atlantic near his home in Donegal.

The latest progress report from the Curlew Conservation Programme shows that this familiar and much admired bird, which has declined by 97% since the 1980s, is being helped by the actions of local landowners and local communities, in collaboration with local Curlew Action Teams.

The report shows that a total of 25 young birds were reared by 42 pairs, meaning a breeding productivity of 0.60 fledglings/breeding pair – which is above the threshold proposed as necessary to maintain a stable population.

The Curlew Conservation Programme engages with local communities, clubs, farmers and landowners. Over the past four breeding seasons, direct assistance and support from the community has allowed the programme to progress in these local areas allowing the Curlew Action Team and relevant parties to work as a collective with one common goal.

“If we don’t work together now, we may be the last generation to hear the Curlew during the summer mornings and evenings across our countryside and children growing up today may never experience what we know as part of what makes our countryside what it is,” said Malcolm Noonan, Minister of State for Heritage and Electoral Reform.

Records of Curlew throughout the breeding season (March – July) can be submitted to agri.ecology@chg.gov.ie