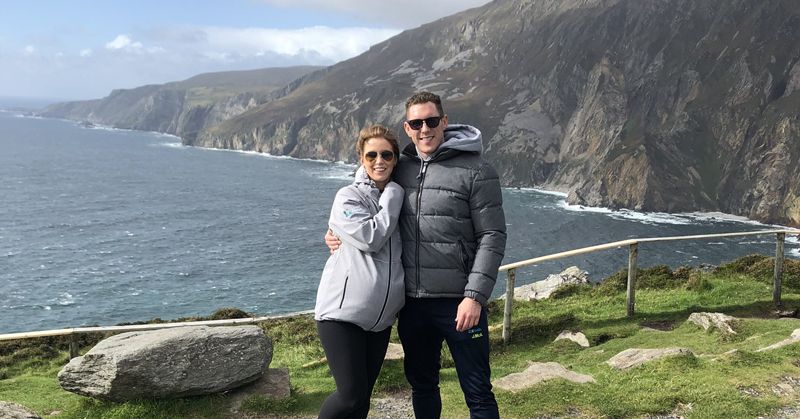 John McAreavey and his wife Tara Brennan have revealed that they are expecting a baby.

The couple shared the happy news following a romantic holiday in Donegal.

He shared photos on himself and Tara as they enjoyed a stay at Lough Eske Castle and explored local attractions including Slieve League and Assaranca Waterfall in Ardara.

John and Tara, who tied the knot back in September 2016, will become parents for the first time.

The good news was shared as the 10th anniversary approaches of the death of John’s first wife, Michaela McAreavey (Harte). Michaela was murdered while on honeymoon in Mauritius, just days after her wedding to John.

John and Michaela’s family are continuing to battle for justice for her murder, while a fresh investigation has been launched in Mauritius this summer.

Northern Ireland’s Deputy First Minister Michelle O’Neill and First Minister Arlene Foster have jointly intervened to write to the Prime Minister of Mauritius, asking him to bring those responsible for the murder to justice.

Mrs O’Neill said: “It is the family’s contention that the Mauritian investigation is being defined by sustained indifference as they have no tangible evidence that the Malaysian authorities are serious about pursuing those responsible.

“I too share that view. The investigation did not and has not given confidence to the family that everything that could be done was being done.

“As a result, no-one has ever been brought to justice.

“We will continue to do all that we can to support both the Harte and the McAreavey families in their quest for justice for Michaela.”

Mrs Foster said: “None of us with children could fail to be moved with the absolute devastation caused by the murder against a background of a wonderful wedding.

“If our letter can in any way help move the investigation along, then it was the least we could do.”