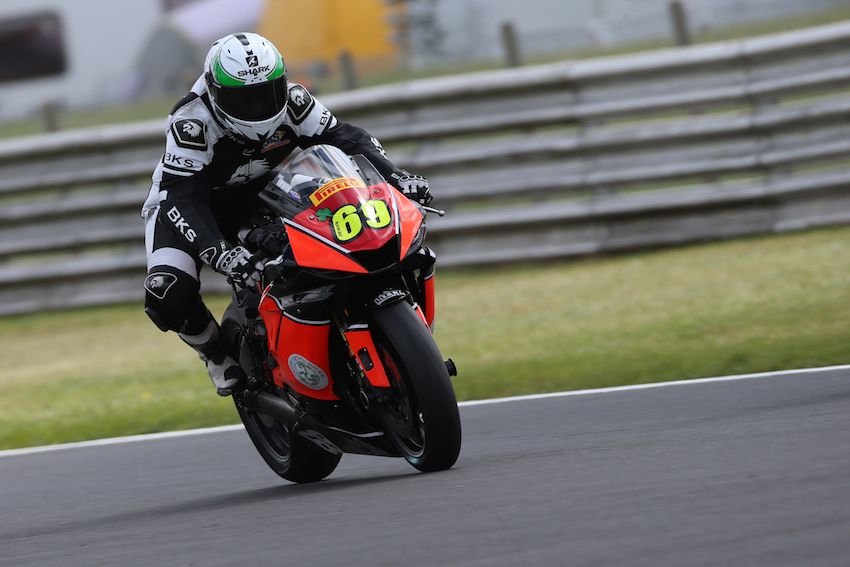 BRITISH Superstock 600 championship rookie Rhys Irwin battled his way to an incredible win today at Silverstone in only the third race of his first full season in the series.

Having started from pole position, an incredibly eventful race saw the Donegal racer drop as low as eleventh place before he battled back to take the lead on the final lap.

His maiden win moved him into second in the championship standings and closing on the leader.

Riding his Irwin Racing Yamaha Rhys was at the top of the time sheets for the entire weekend.

The Mondello Park and J&S Accessories backed rider was never out of the top two in practice or qualifying and took pole position for Sunday’s race with a sub lap record time, three tenths of second ahead of his nearest rival.

As the lights went out Rhys made a cautious getaway and finished the opening lap in fourth place. The youngster then confidently picked off the riders ahead of him and was in the lead by the end of lap six. All was not well with the Irwin Racing Yamaha however with gearbox issues under braking causing him to run wide and drop to eleventh place.

Quickly on the move up the order again the pole sitter’s progress was halted by a safety car, which neutralised the field for four laps. When the action restarted Rhys found himself ninth and once again started to climb the order. Having moved up to fifth another gearbox induced overshoot relegated the Irish rider back to eighth and it looked like his hopes of reaching the podium for the second race in a row were gone.

Having regrouped, the younger of the two Irwin Racing brothers managed to climb to fifth by the start of the penultimate lap and when two of the front runners clashed he made the most of his opportunity to latch onto the leading pair of riders heading into the final tour. Two clean and confident overtaking moves on the last lap saw the delighted youngster take the flag to record his first Superstock 600 win and move up to second in the championship standings after one of the greatest fight-back’s seen in the Superstock 600 class.

Speaking after his podium celebrations Rhys said: “It’s absolutely unbelievable to get this win. Everything I’ve done in my career, from Motocross and racing at home in Mondello Park on into the UK, has been aiming towards winning at the BSB and I can’t believe I’ve done it so early in my rookie season. The feeling on the slowing down lap was amazing.

“The race was wild. I got myself into the lead early on and felt like I could pull away but then the gearbox issue sent me wide and I dropped back to 11th.

“The safety car helped and when it went in I put my head down and went for it. My tyre was nearly shot from all the hard work of making up places but I was able to pass two riders on the last lap and hold on for the win.”

Rhys Irwin will be back in action in two weeks time at Oulton Park for the first double header of the season where he will be looking to close the gap to the championship leader once more.