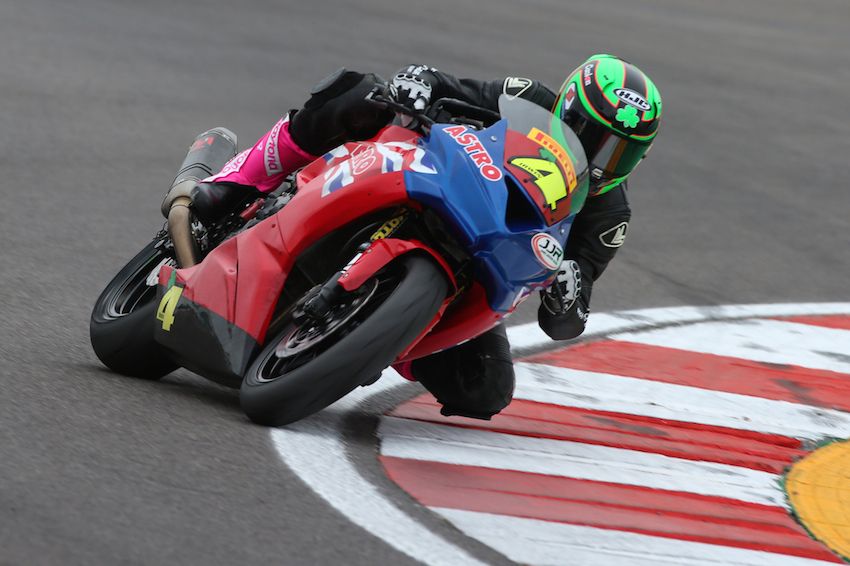 CAOLÁN Irwin put in another strong performance over the course of the latest British Superstock 600 championship weekend at Silverstone.

The Donegal teen left the Northampton track disappointed after dropping his Astro JJR machine out of second place in today’s race.

Engine issues in both practice sessions were overcome by Caolan’s team in time for qualifying where he put in a very strong run to line-up third on the grid for Sunday’s race.

The qualifying performance was particularly satisfying, considering his lack of track time during the two practice sessions, and he then further boosted his chances for the race with fastest time in Sunday morning warm-up.

A strong start to the race saw the Donegal rider sitting in third on his Astro Van Centre, Principal Insurance and J&S Accessories Kawasaki and battling with his younger brother Rhys.

The Irish pair took over the top two places on lap six and Caolán was sitting comfortably in second when a small mistake saw him slide out of the race at the end of lap seven, bringing a disappointing end to another strong weekend.

Speaking after the race Caolán said: “The race result was a bit of a disappointment but the important thing to take away from the weekend was the very strong pace that we had once again.

“I knew I had the speed to win today and was sitting comfortably in second, minding my tyres, while I could see others were pushing very hard to maintain the front running pace, but I made a small error on lap seven and went down.

“Thanks have to go to everyone in the Astro JJR team who put in so much work and give me such a great bike every weekend. Thanks must go too, to Astro Van Centre, Principal Insurance, RK Racing and all my other sponsors along with all the hard working crew, Wes, Dad, Arnie and James.

“We still have along way to go in the championship and with a double header next up at Oulton Park we can make up a lot of ground with a good performance.

“Finally a big shout out has to go to my brother Rhys who took his first race win in the Superstock championship today.”

Irwin will be back in action in two weeks’ time at Oulton Park for the first double header of the season.